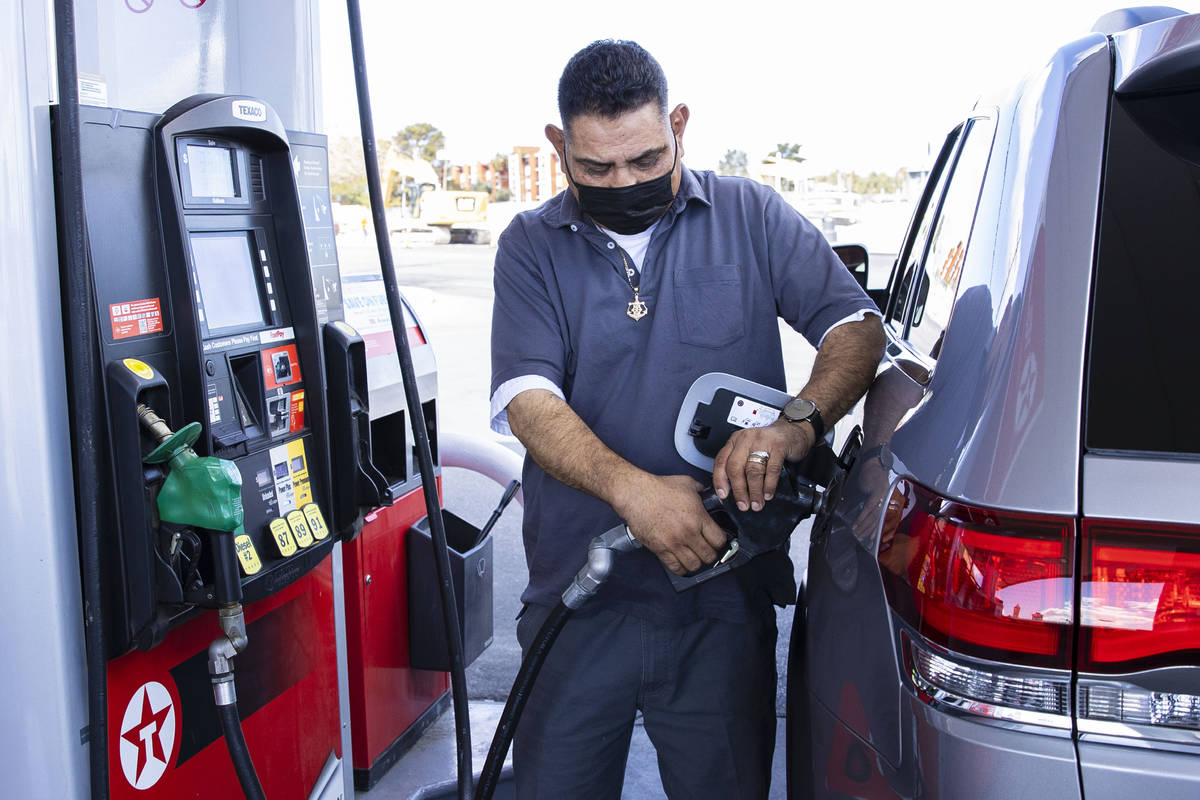 Bizuayehu Tesfaye/Las Vegas Review-Journal Gas prices have risen over 50% from the same time a year earlier in mid-April.

Are you thinking about remodeling your home by adding on? You may want to think again because the cost of lumber has far outpaced the rise in gas prices. The National Association of Home Builders (NAHB) reports the price of lumber has climbed 180% since last spring. Their data shows 1,000 board feet went from roughly $400 in June 2020 to $1,100 in April 2021.

The NAHB study found that the price of an average family home has increased by $24,386 since April 2020, primarily because of an interruption to raw materials when lumber mills shut down at the start of the pandemic for safety reasons.

After they reopened, lumber prices have spiked and continue to climb higher each day with no end in sight.

Why is the cost of everything going up? It would be easy to blame the increases on the White House, but President Biden has only been in office for three months. While there is much uncertainty on how President Biden’s environmental policies will affect gas prices, it is too early to predict the eventual impact until those policies have had time to take effect.

If you post to certain social media websites that the rising gas prices are the president’s fault, your post will be taken down as “false news,” and you could find yourself in time-out or banned from the site.

That doesn’t help decrease the perception that the new administration does not share blame for the rapid increases. Instead, it just fans the flame that something is amiss in Washington and that social media is trying to cover it up.

The primary reason for the rapid increase in gas and lumber prices is due to a fundamental principle of our economy, the principle of supply and demand.

When everyone was forced to stay home during the pandemic, the gasoline demand decreased dramatically. No one was driving. Therefore the supply increased. Now that we are returning to a more “normal” way of life, demand is rising, and supplies are decreasing.

There is a pent-up demand to travel, which will continue to increase the demand for gasoline. On the supply side, the OPEC oil cartel and Russia have made voluntary production cuts, which has the effect of raising prices by cutting supplies.

Also, U.S. companies are investing less in finding new sources of oil. This is due to a combination of factors, including low oil prices over the past year, which discourage companies from developing new drilling sites and growing pressure from environmentalists to shift away from fossil fuels.

The increase in lumber prices started during the early days of the pandemic. Homeowners were stuck home and looked for things to do to occupy their time.

To make matters worse, lumber mills shut down due to infection concerns in the early days of the pandemic. No one expected the DIY surge, and housing construction was grinding to a halt, so it made sense that the demand for lumber would taper off.

It did just the opposite. With record low interest rates and many people spending more time at home than ever before, the housing market is booming in many areas across the country. It’s shaping up to be one of the busiest construction seasons in years. That put even more pressure on the lumber industry. Builders currently have to search harder and pay more to get the materials they need.

In many cases, lumber orders are weeks out. The North American sawmill supply chain is under a tremendous amount of pressure to keep up with demand, and that has pushed the price of lumber to record levels. Production has ramped back up, but it could be many months before we see prices stabilize.

The effect of supply and demand price increases has a far-reaching impact on our economy. If gas costs more, the transportation of goods costs more. If lumber costs more, house prices go up. Eventually, there will be tax increases to businesses.

The Biden administration has made that clear. When a company has higher costs, those increased costs trickle down to consumers.

You can look at this one of two ways, either it is good that there is a high demand for gas and lumber, signaling a return to more normal times, or things are getting more expensive and hitting your pocketbook. Both are true.