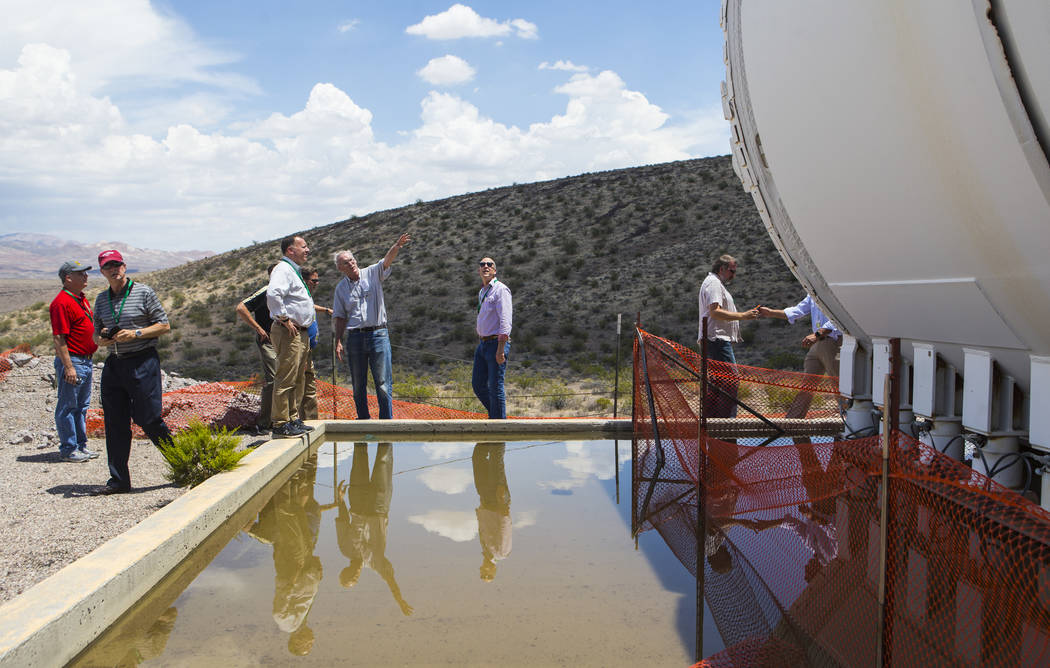 Chase Stevens/Las Vegas Review-Journal William Boyle of the Department of Energy's Office of Nuclear Energy, fourth from left, points to the Yucca Mucker during a congressional tour of Yucca Mountain near Mercury on Saturday, July 14, 2018.

In analyzing what is “fact or fiction” regarding the Yucca Mountain Nuclear Repository today we will look at rail transportation of nuclear waste and the studies done on the possible routes.

One of the primary arguments that state officials are trying to make against the Yucca Mountain Nuclear Repository is that hazardous radioactive waste will pass through Las Vegas.

U.S. Sen. Dean Heller, R-Nevada, has been very vocal about the subject and in July he stated, “The question isn’t whether there’s going to be an accident, the question is how big is that accident going to be? What will the impact be on Clark County?” “That’s the last thing we need is a nuclear accident in our largest county,” he said.

The Las Vegas railway accident scenario is outlined in the “Yucca Mountain Update and Transportation Impacts” report written by Robert J. Halstead for the Office of the Governor, Nevada Agency for Nuclear, that was presented to the U.S. Conference of Mayors Winter Meeting, Washington, D.C. on Jan. 24.

The report presents a biased view on potential railway accidents in Las Vegas. It portends to present “data” that are thinly veiled scare tactics using charts and graphics displaying potential damage from terrorist attacks and accidents.

The report relies heavily on an 800-meter “Region of Influence for Routine Radiation from Rail Shipments” graphic that shows the Las Vegas Strip within a potentially hazardous area. The report leaves out any mention of the preferred DOE route that eliminates the Las Vegas area entirely.

The alternate routes away from Las Vegas are outlined in the final report on the “Rail Transportation Economic Impact Evaluation and Planning Study for the Caliente and Mina Corridors” issued in November of 2007 to the Nuclear Waste Repository Project Office, Nye County, Nevada.

For the Mina Corridor, the DOE would use existing track from an interchange point with the UPRR at Hazen, Nevada, to Hawthorne, from which a new line would be constructed to serve the repository. The Mina alignment would be approximately 40 miles shorter than the Caliente alignment. Since the Mina alignment could use existing track between Hazen and Hawthorne, the amount of new construction would be reduced to a range of 240 to 254 miles.

In addition, whichever alignment was selected, the new rail line could enable freight shipment by industries along the line, with attendant economic benefits to the communities, counties, and the state of Nevada, as well as to private interests. On April 8, 2004, the DOE issued a Record of Decision selecting the Caliente Corridor as the preferred corridor in which to examine possible alignments for the rail line.

In his presentation, Mr. Halstead references the Final Supplemental Environmental Impact Statement 2008 but conveniently leaves out the “Record of Decision” for the Caliente rail route. That route doesn’t come anywhere near Las Vegas and therefore, doesn’t fit into the doom and gloom scenario pushed by the state of radioactive waste being transported by rail near the Las Vegas Strip.

Furthermore, the House passed a bill this year that says to avoid Las Vegas and the Nye County proposal includes a southern route from Jean through Pahrump in addition to a north route that eliminates any waste going through Las Vegas.