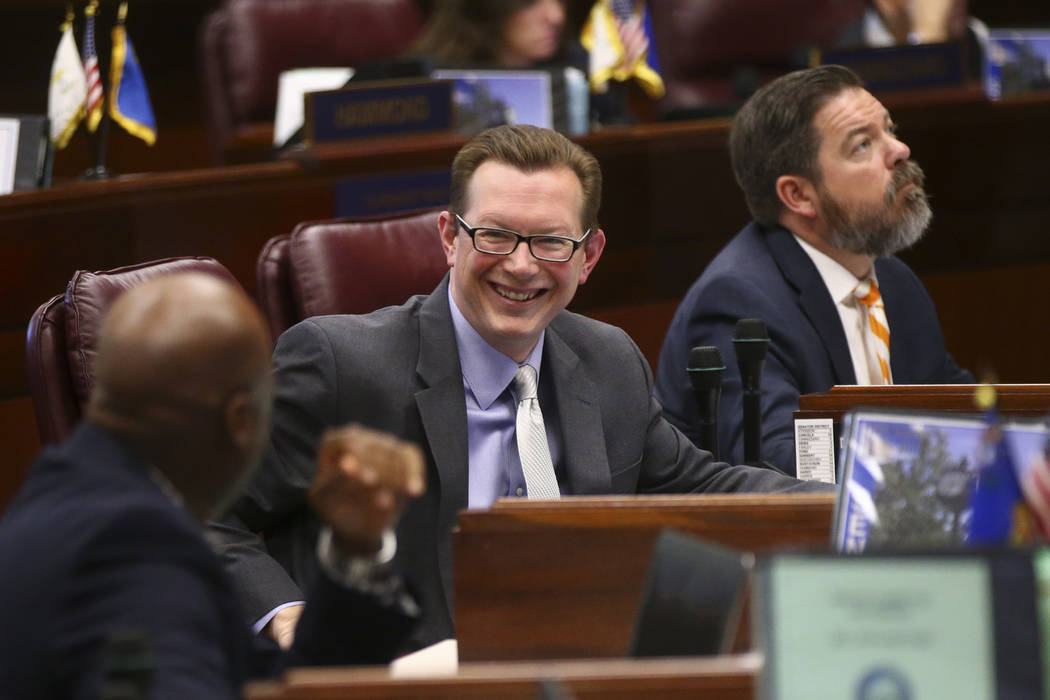 Sen. Ben Kieckhefer, R-Reno, during the second to last day of the Nevada Legislature at the Legislative Building in Carson City on Sunday, June 4, 2017. (Chase Stevens/Las Vegas Review-Journal) @csstevensphoto

In his budget proposal, Sisolak wants to maintain a Modified Business Tax rate that is scheduled to decrease. That proposal would require a two-thirds vote in each house of the Legislature, including the support of at least one Senate Republican. Kieckhefer isn’t a fan.

“There are more than 21,000 businesses in this state that are expecting and deserve that tax cut,” Kieckhefer said while filming Nevada Politics Today. “That was part of the deal when we put in the commerce tax in 2015. Those of us who supported it expect to see this buy-down happen.”

Kieckhefer thinks Senate Republicans agree with him. “I think we’re going to be united on this front. I think he’s going to have a hard time finding two-thirds for this.”

“I resist anything that ultimately drives up the cost of operating government,” Kieckhefer said. “Collective bargaining is a demonstrated method of doing that. You see it at the local level where salaries are significantly higher due to those collective bargaining contracts. Also more problematic than just the additional costs is the lack of flexibility government then has to deal with problems as they arise.

“During the economic downturn, the state of Nevada was able to manage its budget much more effectively, because it wasn’t locked into these collective bargaining contracts. It flies in the face of what we need to be doing for our constituents, which is providing service at the most effective and cost-efficient level possible.”

Collective bargaining for state workers would also “crowd out the ability to pay for additional services going forward” or increase pressure to raise taxes, Kieckhefer said.

Same-day voter registration was another Sisolak proposal, which Kieckhefer opposes.

“I’m against same day registration,” he said. “I think it’s not unreasonable to ask people to prepare for an election and show up on Election Day or vote early. Registering ahead of time gives everyone the opportunity to talk to those voters and make their case.”

One priority of Senate Republicans is expanding Opportunity Scholarships.

“We would certainly like to see continued funding to support, not only those students that are currently enrolled in those private schools with the support of those scholarships, but to see that grow as well,” he said. “This is a proven program that supports low-income Nevada families’ access [to] schools that are appropriate to those students’ needs.

“The demographics are available to everyone to review. These are not rich families using a voucher program to access private schools. These are low-income Nevadans, who are accessing school choice through this program. We support that. We think we should continue to do so. The proof is in the pudding. These families are having success and are utilizing these scholarships, because it’s the right educational environment for them.”

Kieckhefer did signal a willingness to consider a minimum wage hike, if it was paired with overtime reforms.

“One of the Nevada’s unique laws is the overtime trigger,” he said. “If we could start resetting our overtime trigger to more adequately reflect reality of a workplace, then I think a lot of businesses would be more than happy to see a reasonable increase in the minimum wage.”