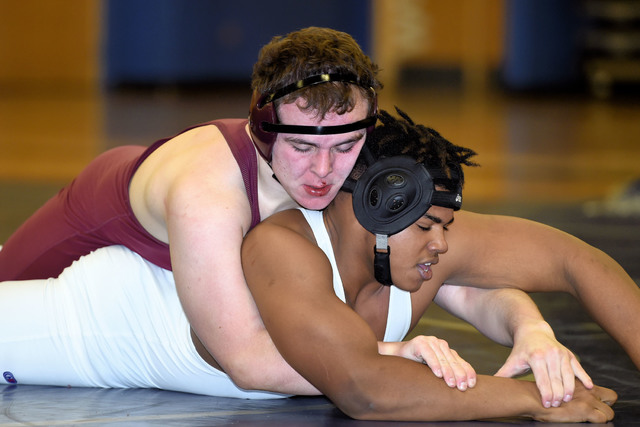 Sophomore Jakob Landis is seen wrestling against Desert Pines. He said he is really enjoying his first year of wrestling. He will be representing the Trojans this week at Western High School at the 3A Southern Regional Championships on Friday and Saturday. Peter Davis / Special to the Pahrump Valley Times 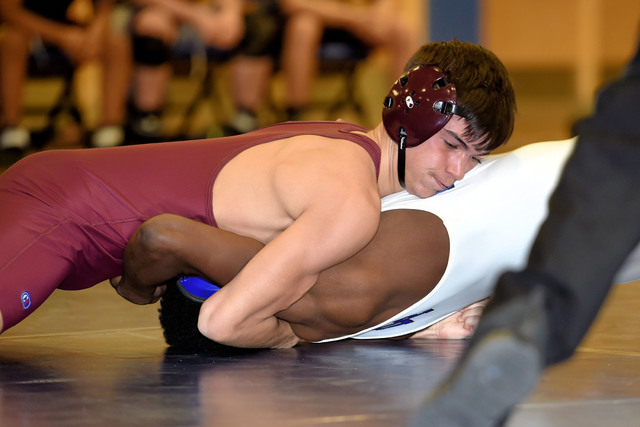 Sophomore Dylan Grossell gets a pin against Desert Pines on Jan. 26. He will be top-ranked in his division at the regional tournament at Western High School this weekend. Peter Davis / Special to the Pahrump Valley Times

The matches begin Friday at 3:30 p.m and end Saturday.

The boys will send 17 wrestlers to the two-day tournament in hopes that some make it to the state tourney in Reno on Feb. 10. The top five wrestlers in each class will qualify for state.

Trojans coach Craig Rieger said his team has been practicing for the past two weeks preparing for this event.

“It’s a new season, the postseason,” Rieger said. “Our focus is to qualify as many wrestlers as possible for the state tourney. We are a young team, gaining experience each day we compete or practice.”

Junior Jeremy Albertson (195 pounds) went last year to regionals but feels this could be his year. He is ranked second in his division.

“I have that experience of last year and so I am not nervous going into it this year,” Albertson said. “I have seen all but two kids wrestle. And the one kid from Mojave that I lost to, he has a good take-down, so I have to be careful about that. The only kid I am concerned about on the Sunrise League side that I didn’t wrestle is the Boulder City kid. He is really strong.”

Sophomore Dylan Grossell (132) is ranked number one in his division going into the regional tournament and was excited to go.

“It feels pretty good,” he said. “This is only my second year wrestling. And this is my first full year of varsity wrestling. To be ranked number one is a great feeling, which surprised me. This will be my second regional tournament. I was scared and nervous last year and I will not be this year and I know what I need to do.”

Sophomore Jakob Landis (220) said it was his first year of high school wrestling and he really didn’t think he would get this far.

“I am kind of nervous and I just want my teammates to be proud of me,” he said. “My dad was a great wrestler in high school and I look up to him. He told me to work hard. It’s a sport of heart and you have to keep fighting to get the top spots. I like the grinding of the sport.”