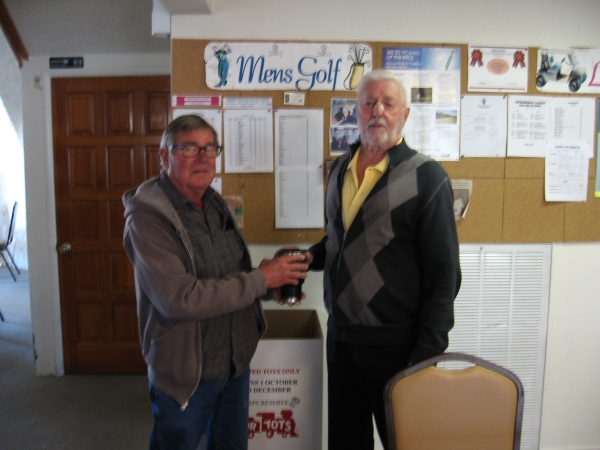 He was sitting down and just daydreaming after a long golf tournament when they announced that the winner of the 2015 Lakeview Men’s Club championship was Jack Ring. That name surprised him because it was his.

The 87-year old senior says he loves to play golf and he said he tries to play every day.

“When I play I need a lot of luck,” Ring said. “Of course, the win surprised me because I was just enjoying myself and having fun. I had no idea that I was winning the tournament going into the last hole. They just called my name out of the blue. I have been playing golf in the valley for 22 years – wow, time flies.”

Ring said his lowest score was a 56 here at Lakeview. He also said this course was the only one he had ever shot a hole-in-one on and he has five.

The championship was played on two consecutive Thursdays, 36 holes, and it finished up on Nov.19.

Ring won the championship with a one-stroke lead over runner-up Lorenzo Alvarado and shot a 112 (par is 58). Gene Bulac, a member of the club said Ring made few mistakes.

“Ring poured on the steam and made few bogies or double bogies during the tourney,” Bulac said.

In addition to earning the top prize money, Ring was presented with the coveted Men’s Club Championship Trophy that he gets to keep for a year.