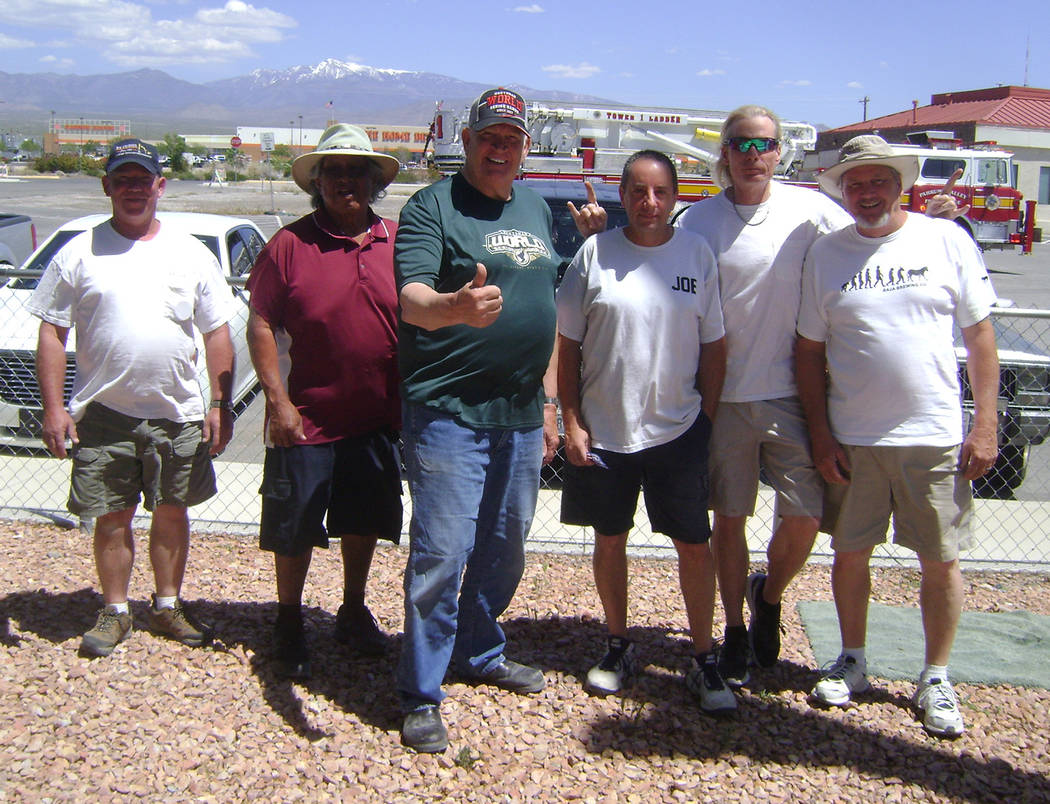 Mike Norton/Special to the Pahrump Valley Times From left, Dave Barefield, who finished third in A Division; Ken Jose, who placed second; tournament champion Dennis Andersen; B Division winner Joseph Kalache; Steven Dilger, who took second in B; and Craig Jahnke, who placed third in B Division at The Best in the West Horseshoes Tournament on Saturday at Petrack Park in Pahrump. 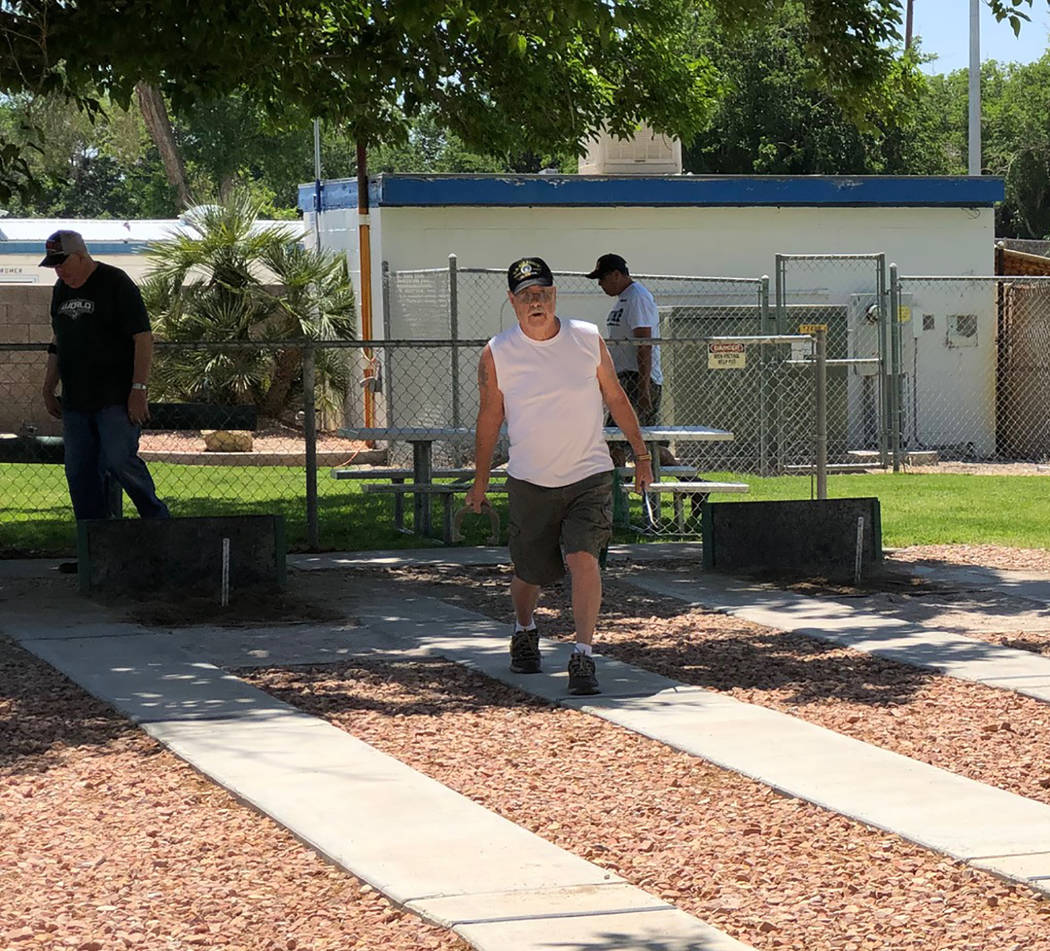 Tom Rysinski/Pahrump Valley Times Larry Fellows of Pahrump competes in the Best in the West Horseshoes Tournament on Saturday at Petrack Park in Pahrump.

Dennis Andersen of Pahrump went 4-0 in Class A to capture the tournament championship Saturday at the Best in the West Horseshoes Tournament at Petrack Park in Pahrump.

The tournament came down to a head-to-head battle with Ken Jose of Tonopah, who also had won his first three games. Jose, who finished with the most points (154) in the division, posted a 52.5 ringer percentage in his opener but could not maintain that prolific pace, while Andersen had his second-best game of the day to record a 38-26 win.

“I took second in Vegas two weeks ago, and when I was down in Bullhead City I took two golds down there, but this is the first I’ve won here this year,” said Andersen, who pocketed $35 for his efforts.

Jose was the only pitcher in Class A to exceed his entering ringer percentage, pitching to 40 percent while his entry percentage was 29.22.

The tournament was held simultaneously with the Wild West Extravaganza at the park, and a horse-drawn wagon would circle the horseshoes pits from time to time. Andersen said he barely noticed.

“When people talk to me, I ignore them,” he said. “I don’t even look at the other people and what they do, because I don’t want to put pressure on myself.”

Sooner or later, that focus can help a pitcher find his range.

“You get the feel, you get the motion, and it just goes,” Andersen said. “The first two games were kind of mediocre, but the third game it just kicked in.”

The third game was easily his best, nailing 18 ringers on 40 pitches to defeat Larry Fellows 51-12 and set up the showdown with Jose.

Over in Class B, Joseph Kalache and Steven Dilger each went 4-1 to force a playoff. Kalache, who had managed just three ringers in a 36-11 loss to Dilger during the round robin, hit 15 of them in a 39-19 win to take first place. He shook off a three-ringer showing in his one defeat to go 5-1 and capture the title.

Kalache’s 70 ringers were almost 30 more than anyone else in the division, and he finished with a 29.17 percentage. Dilger was the only other pitcher over .500 in Class B, while Craig Jahnke, whose entering ringer percentage was 6.66, finished third on a tiebreaker.

The tournament was smaller than many of those sanctioned by the National Horseshoe Pitching Association, which often has three divisions of competition.

“We had 11 pitchers, two groups, a group of five and a group of six,” said Mike Norton, secretary/treasurer of the Nevada State Horseshoe Pitching Association and the organizer of Pahrump tournaments. “Payout was $35 for first, $20 for second, $15 for third.”

Norton plans on adjusting the schedule a bit going forward, part of a larger plan to run tournaments in conjunction with events held at Petrack Park.

“Next year at Wild West Extravaganza we will have a non-sanctioned tournament so all can play,” he said.

Next up will be the Armed Forces Day Open on May 18 in Las Vegas. The next tournament in Pahrump will be the Saddle West Open on July 6.