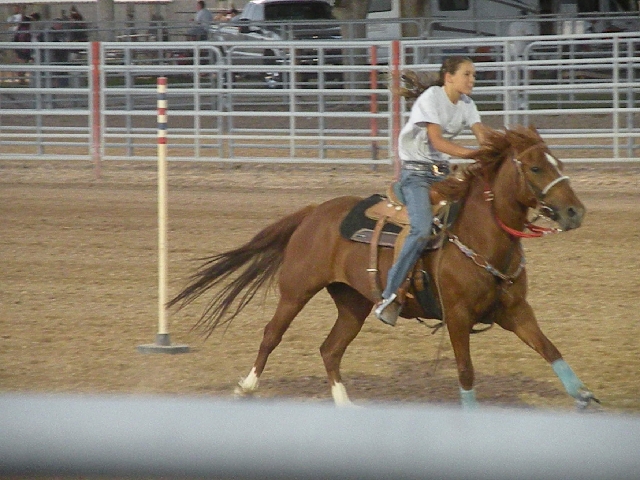 Barrel racing is a fast, competitive sport in rodeo. It attracts girls of all ages from all over the state.

In a town where the horse culture seems to be fading away, there are still young girls who dream of becoming the next Brittany Pozzi. Pozzi is from Victoria, Texas and is the reigning Women’s Professional Rodeo Association 2012 Barrel Racing Champion.

Barrel racing today is dominated by girls from Texas. Texans occupy 11 of the top 25 in the WPRA.

Aleyiah Mann also aspires to be like Pozzi, her favorite barrel racer.

Mann is a home-schooled girl from Pahrump who will be in eighth grade next year. She has been barrel racing for three years and is competing in local gymkhanas and the Nevada Wrangler Junior Rodeo Association.

Mann says she wants to take competition to the next level and do the high school rodeo circuit in a year when she is in ninth grade.

Once she makes the decision to go to the high school rodeo circuit, it is a big one. High school rodeo season starts in September and continues through May. The season culminates in June with state finals in the middle of the month in Fallon. The fall season is light, but March through May it is non-stop riding and almost every weekend.

Aleyiah’s mother, Tina Mann, said she and Aleyiah’s father decided to get their daughter into horses purely for social reasons because Aleyiah is home-schooled. Tina felt she needed some extra interaction.

Over the years, the commitment has grown and blossomed into something her daughter loves to do and is very passionate about.

The commitment is on the verge of becoming a huge deal for the parents, but Tina said she remains supportive.

“She is in WJRA and has done a couple of semi-professional rodeos where she has won some money,” Tina said. “She has gone to Round Mountain and Boulder City. Between the WJRA and the high school rodeo it would be every weekend. It would be a huge responsibility and a lot of money. It’s a huge commitment for us.”

Tina agrees that most kids start something and then stop and do something else. She feels her daughter is way beyond that now.

“I thought we would just stay with the local stuff at first, but that’s not how it worked out. It definitely started off as being just for the experience, but I then saw a light. I saw determination and a drive. The light switched on and we will have to make some adjustments. I have even had some people approach me about her,” Tina said.

According to local barrel racer trainer Robin Roberts, the Manns are doing the right thing. She said the local gymkhana is like the little league of barrel racing. The next level is high school.

“Most of the high school rodeos are up North,” she said. “They try to make it so they have two rodeos in one weekend for convenience. They are shooting for scholarships and you can actually get one.”

Roberts believes the best way to see if kids are serious about barrel racing is to see how they work with horses.

“A lot of kids want to have the horse saddled already,” Roberts said. “I never do that. I make them clean their hooves, brush them and hose them down. I can usually tell within one or two lessons if the student is going to stick with it.

“Many kids want to ride a horse, but when they realize they have to clean the corral and clean their feet off and you have to brush them and feed them, it’s a different story. You probably get one out of 10 that will actually stick with it.”

Roberts said Aleyiah has been riding and doing the gymkhanas for a while, and  she agrees with Tina on Aleyiah’s commitment.

“Her parents’ support in getting her there is a big part of it. Just getting there and how hard they want to work. You also have to love that horse and you can’t just go out on the weekend. You must ride during the week. You have to treat the horse like any other athlete to keep the horse in shape.

Aleyiah agrees with Roberts and believes she is committed to the sport for the long haul.

“A lot of practice goes into the barrel racing to be able to run consistently,” she said. “I spend about three hours a day on my riding. I have done soccer and baseball in the past. Barrel racing takes a lot more effort because you have to be on your horse pretty much every day of the week to keep them in shape. If you do not have lights, it can be even harder during the summer.”

Aleyiah is also passionate about her horse. The love of the horse drives her to succeed.

“I want to succeed and do everything else with the horse. I love her. I feel like I am eating and sleeping barrel racing. I love it,” she said.