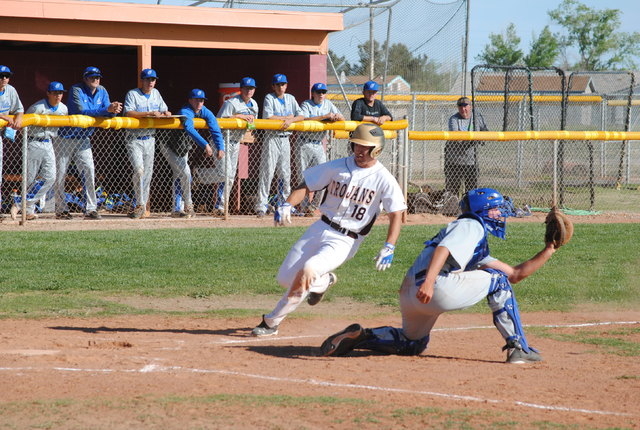 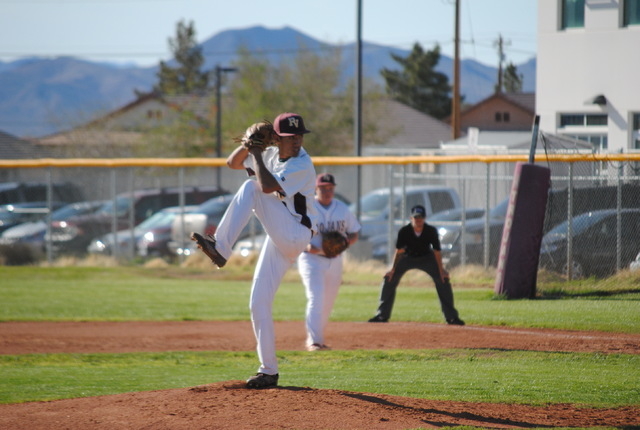 It was a showdown that never materialized. The Trojans baseball team (11-4 overall, 3-1 Sunset League) jumped out in front of the Mountain Lions and never looked back and easily defeated them 10-0 on Wednesday afternoon.

Other teams have talked about the quality of the Sierra Vista team ever since they won the state championship in 2005. The Mountain Lions (3-9, 2-2) have made it to the playoffs every year since 2002 and according to Trojans Coach Brian Hayes their team will be there this year too.

“Sierra Vista will be one of the top 4 teams in our league, so they definitely are a good team,” he said.

The Trojans were just better this day. He attributed this win to Senior Josh Mortensen’s pitching.

Mortensen allowed 2 singles, 2 walks and had 6 strikeouts. He also scored 2 runs and was named the player of the game.

“Josh pitched an excellent game … As for pitching, we feel as though we have three solid pitchers who can give us a chance to compete in any game (Eddie Gonzalez, Josh Mortensen and Kyle Kral),” Hayes said. In addition Hays said he has some young pitchers who can come into a game in relief and throw strikes (Drew Walker, Parker Hart and Garret Lucas).

“All we ask of our pitchers is to focus on getting the first hitter out of every inning and limiting their walks to three or less per game,” the coach said. “We feel that our defense will make plays behind us when the ball is put in play.”

Mortensen said he just felt awesome on the mound.

“Everything was great especially my off-speed pitch on the outside,” he said. “When I throw it to the outside it even looks slower than it really is.”

Mortensen said the team was shocked that they won by so many points.

“Going into the game we thought it was going to be tough in pitching and hitting,” Mortensen said. “We just kept on playing great defense and the hits came.”

Mortensen leads the team in stolen bases and has a goal of 50 for this year. He already has 20. He had 46 last year.

“All I need to do is to get on base more, especially during my first at bat,” he said.

Hayes also believes his hitting came through. It was 3-0 in the sixth with Pahrump out in the lead when the team broke the game wide open with their hitting.

Dylan Ault was much of that offense, he went 4-4 with a double and 3 RBIs. Overall the Trojans had 11 hits during the game, 4 doubles and 9 RBIs.