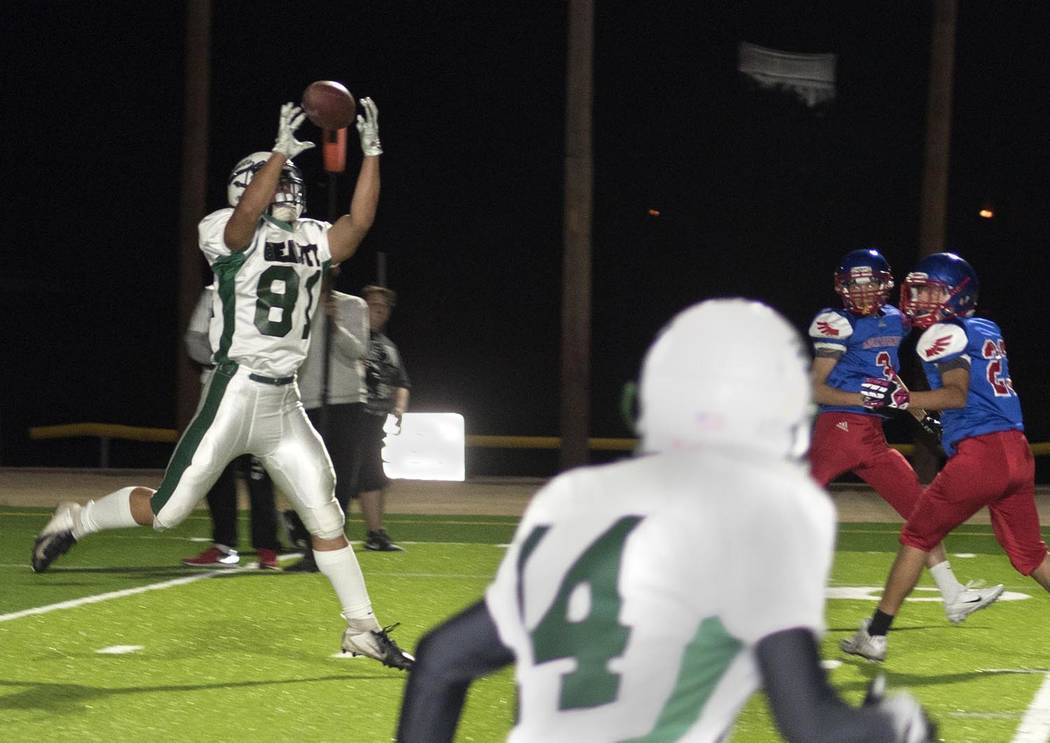 Richard Stephens/Special to the Pahrump Valley Times Beatty senior Max Taylor leaps to catch a pass from Jacob Henry during the Hornets' 38-0 win over Indian Springs on Oct. 25 in Beatty. 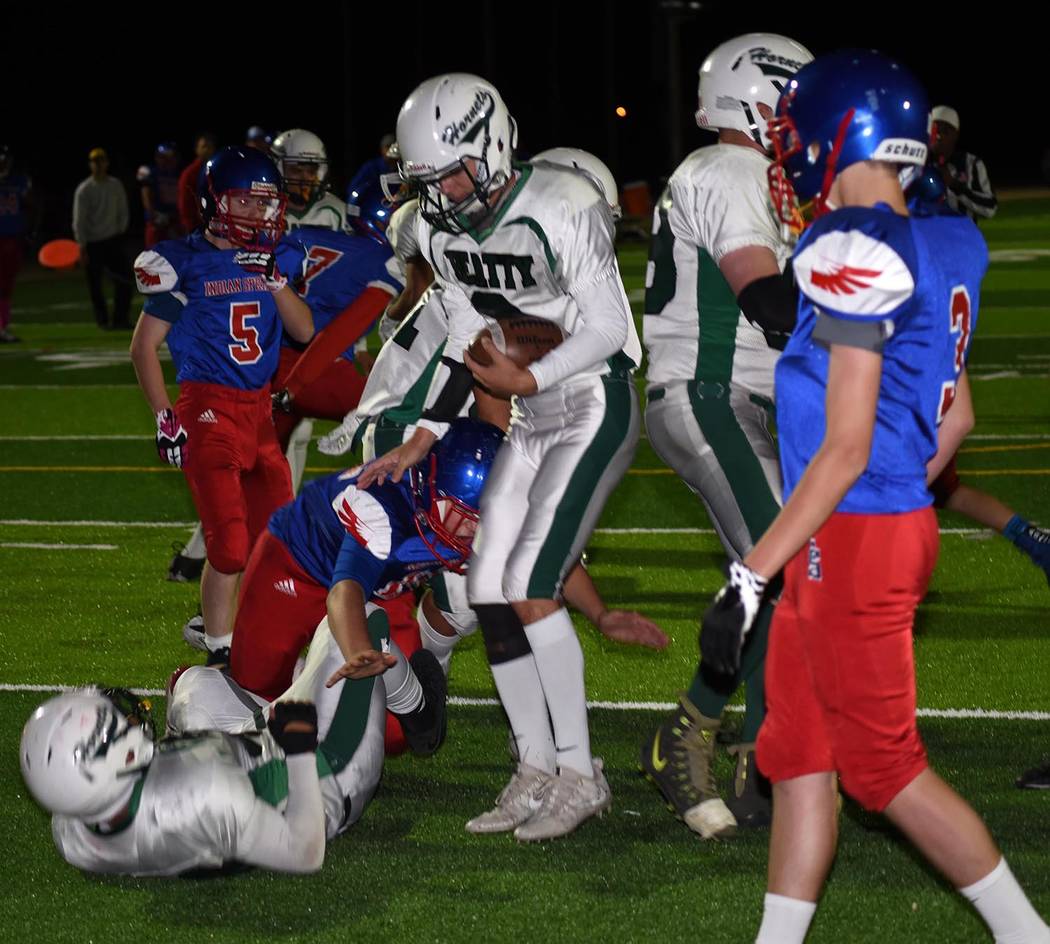 Richard Stephens/Special to the Pahrump Valley Times Quarterback Jacob Henry reaches the end zone for one of his two rushing touchdowns during Beatty's 38-0 Senior Night win over Indian Springs. 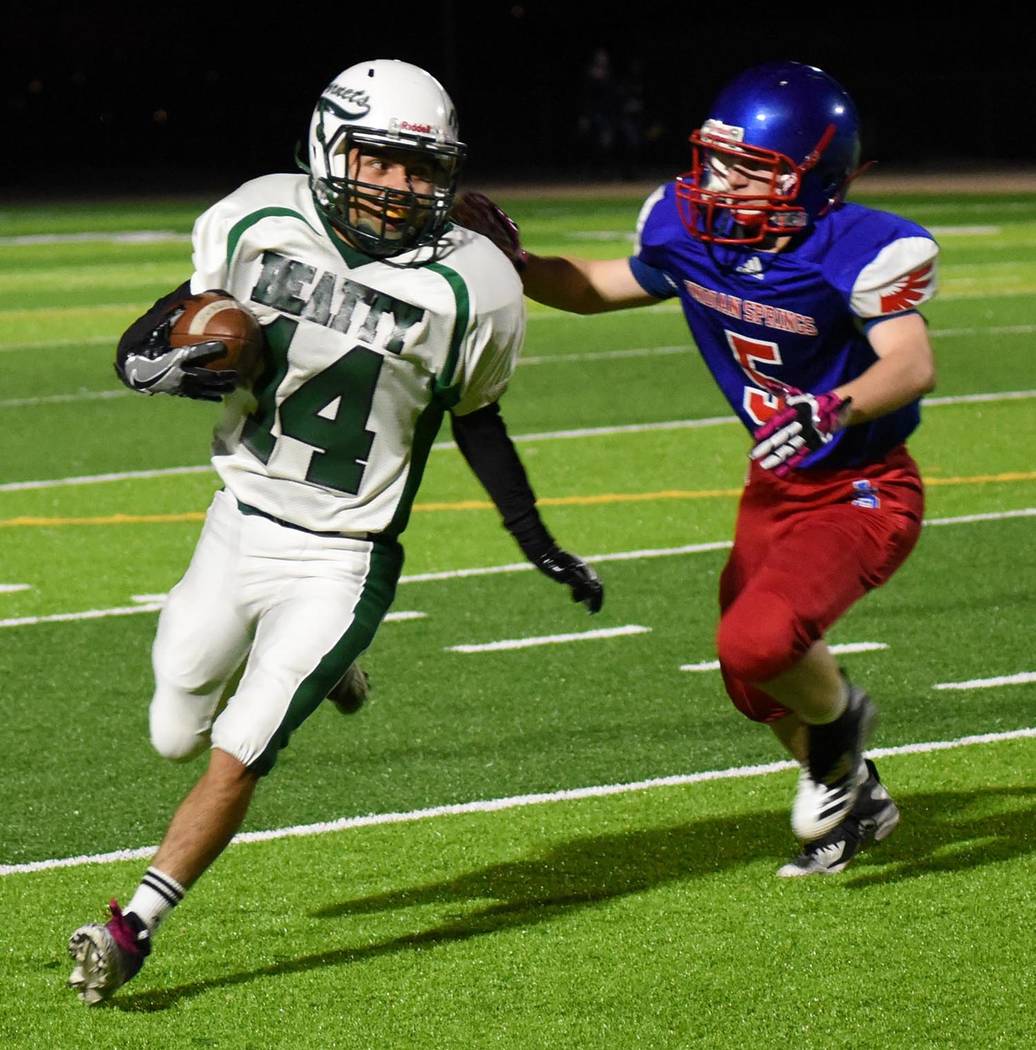 Richard Stephens/Special to the Pahrump Valley Times Efrain Villanueva looks to turn the corner against the Indian Springs defense during Beatty's 38-0 win on Thursday night. 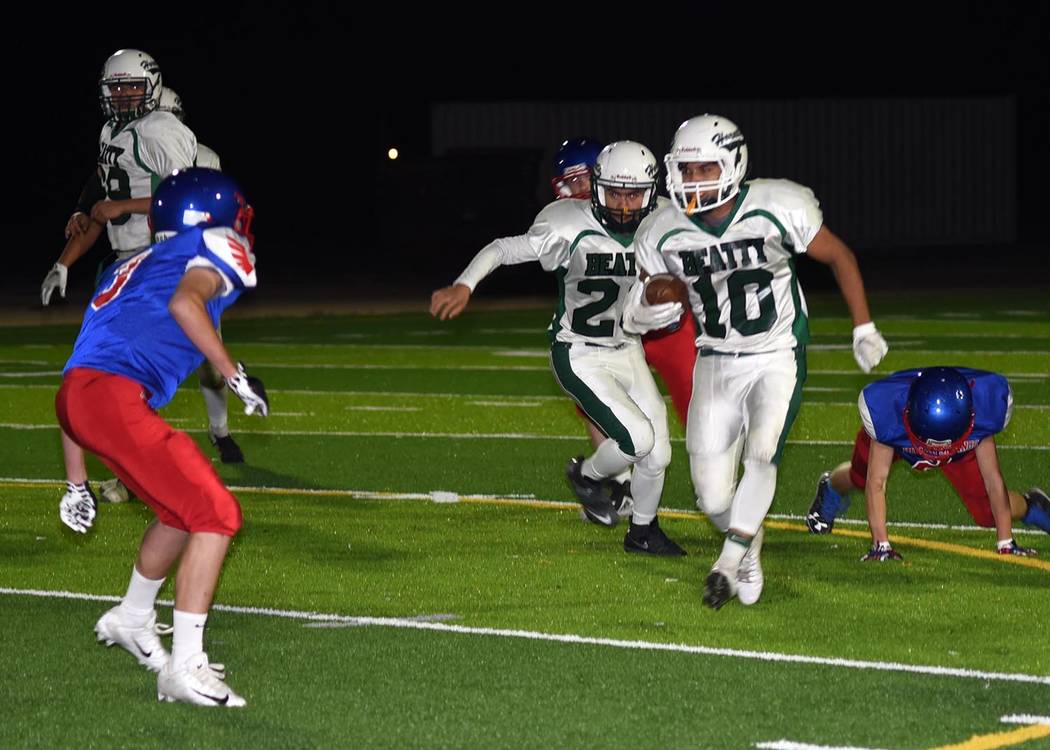 Richard Stephens/Special to the Pahrump Valley Times Beatty's Fabian Perez runs for a big gain during the Hornets' 38-0 win over Indian Springs on Thursday night.

Senior Night was a bit bittersweet for the Beatty High School football team.

On the one hand, the Hornets celebrated a group that posted an 18-8 record over the past three seasons, with all eight losses against Pahranagat Valley and Spring Mountain. On the other hand, Beatty (6-2, 3-2 1A South) wrapped up its season with the distinction of being the best Class 1A team in the state not to make the playoffs.

The game itself was no contest. Jacob Henry ran for two touchdowns and hit Max Taylor for a TD pass, Alan Sandoval and Fabian Perez each scored, and Beatty rolled to a 38-0 victory over Indian Springs on Thursday night in Beatty.

It was the fifth time this season the Hornets have held an opponent to fewer than 10 points.

“They were not very good,” Beatty coach Leo Verzilli said of the Thunderbirds (1-6, 1-4). “It was Senior Night, so we played our starters for about the first quarter. Our younger guys got a lot of experience. Defensively, we kept some of our starters in.”

But the fact the Hornets missed the playoffs for the first time since 2013 despite a 6-2 record is a sore point with Verzilli. When Class 1A was realigned into four leagues this year, it was determined the top two teams in each league would make the playoff. With Pahranagat Valley and Spring Mountain in the same league, the Hornets knew it would be an uphill climb before the season even started.

“We do have a short playoff season,” Verzilli said. “You play a couple of weeks and then you’ve got a championship. They could extend it, give the first-place teams a bye in the first round and incorporate a couple more teams. They could make a change, but I don’t know if they will or not. It would be nice to get some other schools involved.”

With eight seniors on the roster, the Hornets will be losing some very talented players to graduation. But Verzilli said the cupboard will be far from bare in Beatty.

“We’re not going to be left in the lurch,” he said. “We have some young kids coming up. … Efrain Villanueva will be back, Fabian will be back, Brayden Lynn has been playing quite a bit, and he’ll be back. So we’ll have a core of four or five kids that have had a lot of experience either offensively or defensively to build around for next year.”

None of which means Verzilli won’t miss the likes of Henry, Sandoval, Taylor and the rest of a senior class that performed so well over their careers.

“This year was the same team, because we didn’t have any seniors last year,” Verzilli said. “These kids were leaders as juniors. What a great job they did. Kudos to them for putting in the time and the effort as a group.

“They will be missed. I can’t say enough about them. Even outside of football, they’re all good kids, and that had a lot to do with it. They have a great attitude, they’re all friends with each other. They have a lot to be proud of. They’ll be successful in everything they do.”