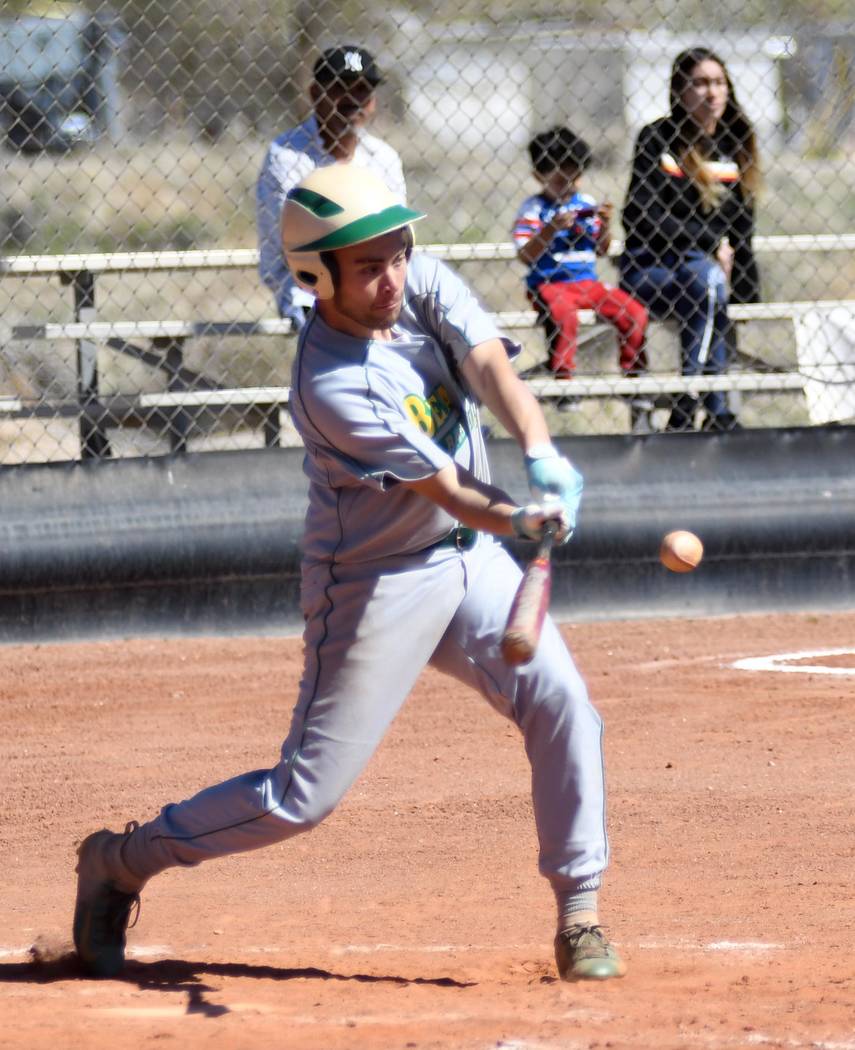 Richard Stephens/Special to the Pahrump Valley Times Beatty senior Geo Maldonado, shown hitting against Spring Mountain, doubled, tripled, drove in 5 runs and scored 3 runs during an 18-15 win Friday in the second game of a doubleheader against Green Valley Christian in Henderson. 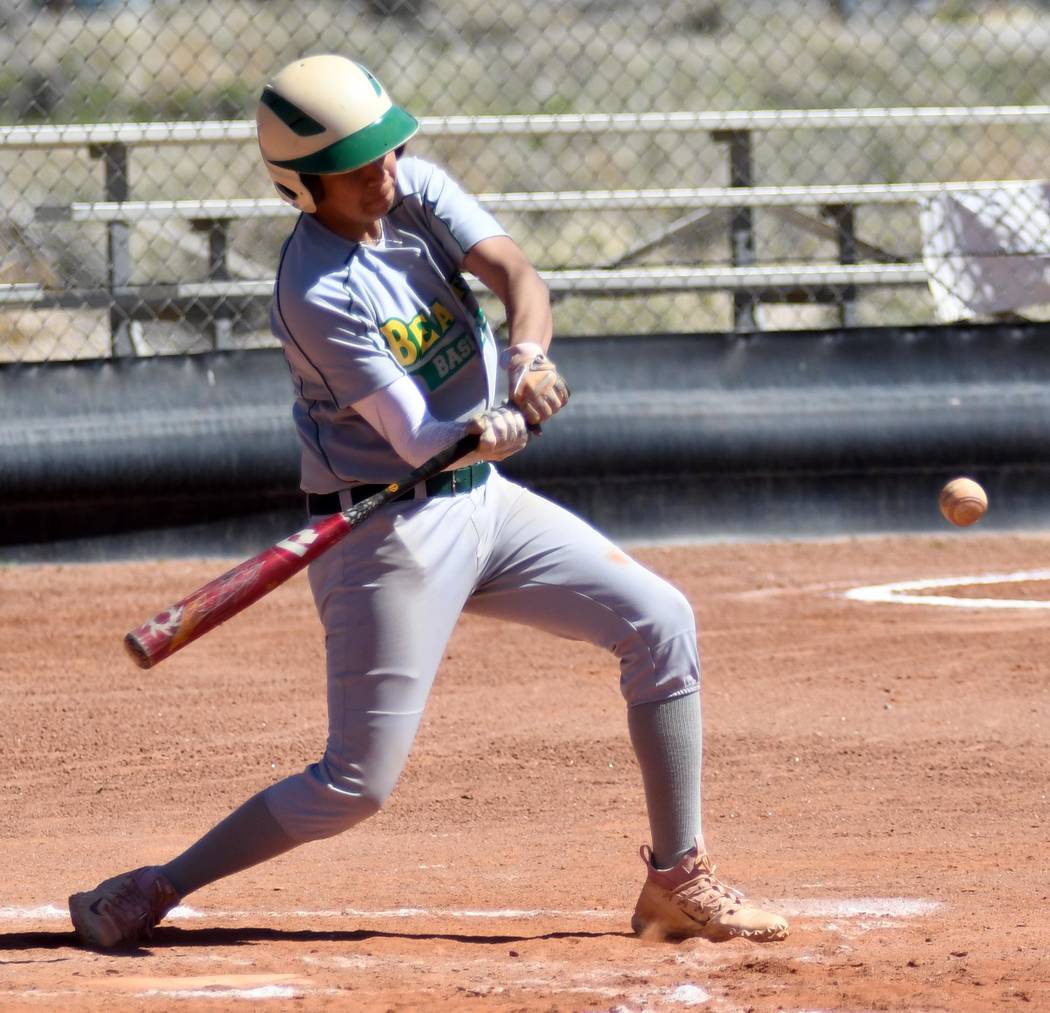 Richard Stephens/Special to the Pahrump Valley Times Junior Austin McKenzie hits against Spring Mountain on March 29 in Beatty. McKenzie drove in 4 runs and scored 4 runs during a doubleheader sweep of Green Valley Christian on Friday in Henderson.

After having 15 hitters reach base via a walk or being hit by a pitch during a 15-run inning Friday, Beatty’s baseball players went into the second game of a doubleheader against Green Valley Christian almost begging for something to hit.

Unfortunately for the Guardians, the Hornets knew what to do with decent pitches when they saw some.

The top four hitters in Beatty’s order combined to go 10-for-13 with a double, 2 triples, 3 walks, 12 RBIs and 12 runs as the Hornets outlasted the Guardians 18-15 to complete a sweep of a Class 1A Central League doubleheader at Burkholder Park in Henderson.

“We hit the ball even with their first-team pitcher coming in, but we didn’t pitch,” Beatty coach Leo Verzilli said. “Second game we should have been out of here, but our pitching fell apart.”

But Green Valley Christian’s pitching fell apart first, as it did in the opener, won by the Hornets 21-8. In that one, a 6-6 tie went up in smoke for the Guardians in the top of the fifth. Beatty batted around twice in the frame despite getting just 3 hits, and three Hornets came to the plate three times apiece.

One of them was junior shortstop Fabian Perez, the Hornets’ leadoff hitter. Perez, who also was the winning pitcher after relieving in the third and finishing the five-inning game, went 3-for-3 with 3 walks, a double, a triple, 3 stolen bases, 2 RBIs and 5 runs scored. Seven Hornets scored at least twice.

The second game was more of a see-saw affair, with each team unable to stop the other after taking a lead. Beatty went up 7-3 after the top of the second, paced by Jacob Henry’s RBI triple and a 2-run double by Geo Maldonado. But by the end of the third it was 10-10, with the four Guardians scoring after drawing a walk in the bottom of the third.

But the Hornets put away the game with an 8-run fourth. Only 3 hits were involved, but one of them was a two-run triple by Maldonado, who finished 3-for-4 with 5 RBIs and 3 runs, and another was an infield single by sophomore Aniken Johnson which glanced off of the pitcher’s glove and drove in a run. The third hit ended the inning, as Perez was thrown out easily at home trying to stretch a 2-run triple into an inside-the-park home run.

Perez finished 2-for-4 with a walk and 4 runs scored, while senior Jacob Henry went 3-for-3 with a triple, 2 RBIs and 3 runs. Cleanup hitter Austin McKenzie had 2 hits, 2 walks, 2 RBIs and 2 runs.

“Our top four, maybe five, are going to hit the ball, get on base,” Verzilli said. “They’re older, but as we go down, six, seven, eight, nine, they’re younger and less experienced, and we hope for the best.”

It doesn’t hurt when the opponent helps you out, evidenced by No. 9 hitter Shaun Odell, a sophomore who did not play in the opener, drawing 4 walks and scoring 4 runs in the second game. All those walks to Odell ensured the top of the Hornets’ order would come up with runners on base throughout the game.

And the bats at the top of the order took care of business.

“Our batting improved when we got good pitches,” Verzilli said. “We got good pitches and made good contact. And our fielding’s not bad. But again, it’s all pitching. If your kids are not on, it’s a long day.”

The victories left the Hornets 5-2 overall, 4-0 in the Central League.

The Hornets went up against some interesting competition on Friday during the Richard Lewis Invitational at Moapa Valley High School in Overton.

While there were three other Class 1A schools at the meet, the field included three 2A schools, three 3A schools and eight 4A schools, so top-10 finishes were significant accomplishments.

Junior Jose Granados turned in three of them, placing fourth in the 1,600 meters (a season-best 4:43.68), fourth in the high jump (a personal-record 5 feet, 6 inches) and teaming with Alfonso Sandoval, Jovan Oseguera and Christopher Rodriguez to finish eighth in the 4 x 800 in 9:22.81.

The 4 x 200 relay team of James Quirk, Luiz Rodriguez, Uriel Montoya and Damian Godinez finished in 10th place with a time of 2:07.65.

While the boys’ 13th-place total of 11 points might seem insignificant, looking ahead to the postseason, that total was better than Spring Mountain, Tonopah and Pahranagat Valley, the other three 1A schools competing.