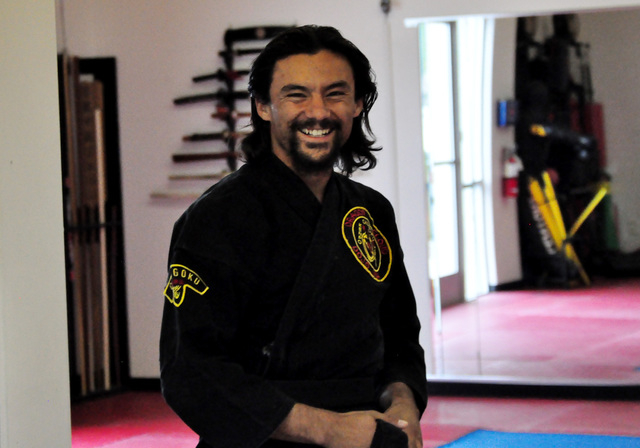 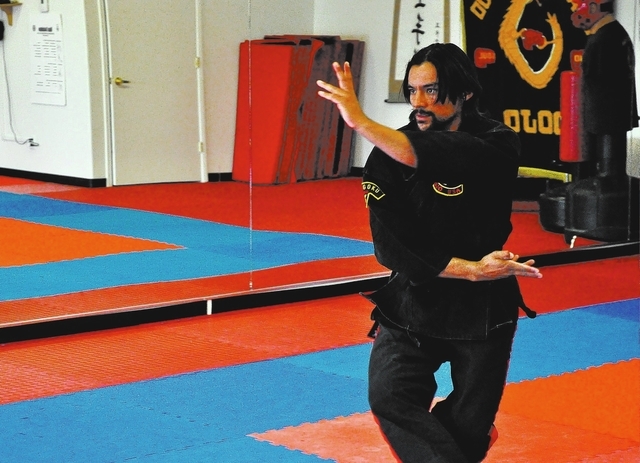 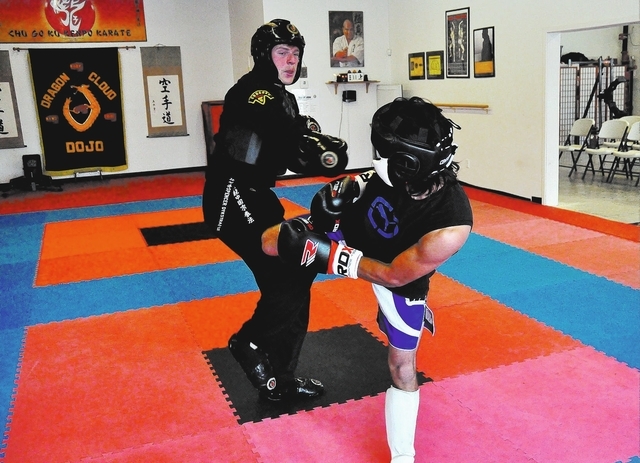 Andrew Gonzalez is the latest amateur mixed martial arts fighter to enter the ring from Pahrump. He will be fighting in North Las Vegas at the Cannery Hotel and Casino in a Tuff-N-Uff fight at 7 p.m. tonight.

Also on the card is Brandon Schneider, also from Pahrump.

“I am ready for this fight,” Gonzalez said. “I have the explosiveness to take this guy out and I am prepared.”

Not much is known about his opponent, but according to Gonzalez, he is also a stand-up fighter.

“I just saw a brief video of him fighting and I really could not tell from that if he had much of a ground game,” he said.

Gonzalez has been fighting for one year and is a first-degree black belt in karate. He is currently working on his second degree and his goal is to make third so that he can teach.

Gonzalez has overcome personal adversity to get this far, having lost most of his hearing as a child.

“When people talk to me, I basically have to lip read,” said Gonzalez, who was born with hearing but a disease has slowly eroded his hearing away. “I only hear about 10 percent of what people say and must rely on a hearing aid.”

Gonzalez works with at-risk teens for the Nye County Coalition in Pahrump. He teaches life skills and helps kids with their education. Many of the at-risk teens he works with are from foster families or are homeless.

Gonzalez wants to take what he has learned from karate and teach it to the at-risk kids. He is now working on a program to teach karate to the kids to build their self-confidence. He is teaching karate to Nye County Coalition employees to test it out.

“I hope to bring some balance and teach them a healthy life-style with this program,” Gonzalez said.

His karate sensei, or instructor, and coach, Master Karate Instructor Jose Hernandez of Dragon Cloud Dojo, has been working with Andrew for five years. At the moment, Gonzalez is the only fighter fighting in MMA from his dojo. Hernandez said the reason for this is because MMA is not a focus of the dojo.

“Andrew wants to prove that karate will work in MMA and my job is to support him in that,” Hernandez said. “I don’t have that many people who want to do the MMA thing and that is OK. The ones that want to do it I will support them in it.”

Hernandez explained that karate takes years to master and most people fighting in MMA take things from martial arts that they can learn fast. Hernandez said Gonzalez’s strength is his attitude and he is not a bad puncher.

“He has powerful punches and strong kicks,” Hernandez said. “He really works hard on conditioning. He also knows how to focus.”

The sensei said Gonzalez understands that he has to put in the hard work, the running, the rope work and waking up early.

“I want him to know he has enough gas in his tank,” the sensei said. “So he won’t give up.”

Gonzalez understands he needs to learn new skills to survive as a mixed martial artist. He has gone to Trojans wrestling coach Craig Rieger to learn moves and is also learning jiu-jitsu at Robert Wilson’s Mix It Up Academy. He is doing this because he lost his first Tuff-N-Uff fight to a submission judo hold, called an arm bar.

“Before that first fight we identified his ground game as lacking so I put him in touch with the wrestling team (at PVHS),” Hernandez said. “We used wrestlers to make his ground game better. Andrew’s only goal was that he not get submitted.”

Rieger brought in former wrestlers to help Andrew fight better on the ground, but in Gonzalez’s mind it was not enough and he turned to Wilson for more help. Wilson was more than happy to help Gonzalez with his ground game and this was also OK with Hernandez.

“He has worked with me for about two months,” Wilson said. “He has a lot of potential. He learns quick, is hungry and eager to learn and a hard worker.”

“I will keep him in there and rotate up to five fighters every minute,” he said.

Despite the need for the ground game Hernandez wants his fighter to not overly focus on it.

“I told him to stop trying to be a grappler because I noticed he was putting the emphasis on the ground game,” his coach said. “I told him you’re not a ground guy. You made the decision to be a striker six years ago. Don’t try to change that.”

To Hernandez, mixed martial arts fighting is all about imposing your will.

“Get in the ring and don’t play around,” he said. “If he gives you the opening, take it, if not, create it and then take it.”

Gonzalez listened to his sensei and agrees that he is still mainly a striker.

“If the opportunity presents itself my plan is to take my opponent out quickly,” Gonzalez said. “I will test him out and see how much he can take. I feel I can win the game standing up.”