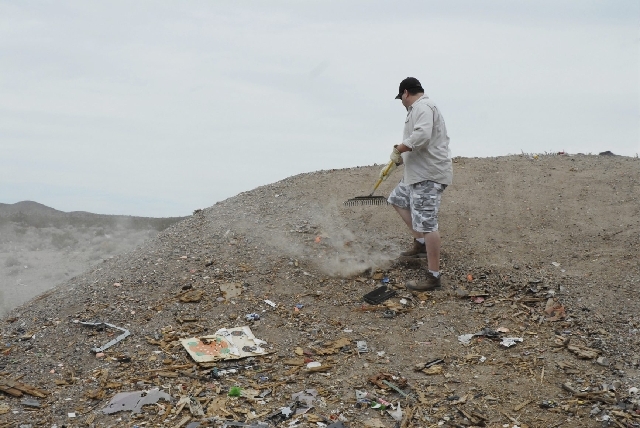 Just three miles past Windrock Country Store on Bell Vista Road lies the Bureau of Land Management shooting range and thousands of people use the area for free target practice.

The range is a series of berms right off the highway as travelers head toward Death Valley.

Most people who use the range clean up after themselves, it’s the ones that don’t who create a problem for others.

According to BLM Ranger Shane Nalen, the range relies on the honor system for keeping the place clean and once a year the BLM might have a cleanup.

“We had volunteers come out and a number of other folks associated with the BLM,” Nalen said. “I forget the amount of cubic yards (of debris) that was removed from the land, but we did not get the entire range done. In general, the target shooting community is pretty responsible.

“It’s the 2 percent that goes out and shoots up old TVs and furniture and leaves the refuse behind. You’re supposed to take out everything with you that you bring in. You bring in a target — including the refuse associated with the target — you need to take it out.”

Will Sutton and Tom Grose are two shooters who have taken it upon themselves to remove the items left behind. They organized a cleanup of the shooting range last week and gave up a good three hours of a morning with about 10 other volunteers.

Both feel the overwhelming amount of trash was just so great that going to the range was not enjoyable anymore.

Sutton is hoping he can get an individual with some kind of loader and dump truck to volunteer or even somebody to donate a dumpster to their cause.

“The place was just a total mess,” Sutton said. “There were broken bottles everywhere and people would take wood pallets up there and just shoot them up. There are big piles of wood everywhere. It looks just like a garbage dump. Our future plan is to go out there and keep it clean.”

There was too much trash for Grose.

“I helped with the cleanup because I wanted to go there and enjoy it without all the trash. I have been shooting there for two years. This is the worst I have ever seen it. The group on Facebook just got together and the cleanup turned out great.”

Dave Casper is another shooter who helped with the cleanup. He said he would like to see the town become involved with the effort.

“I was just helping to keep the range clean,” Casper said. “We are trying to get the town to bring in a dumpster or containers. If you have a trash bin out here, people will tend to use it.”

When asked why the BLM does not put trash cans at the range, Nalen replied, “You really can’t put a trash can out there because you need service and who will pay for that?”

Nalen said his main priority on the range is keeping people safe. He said since he has been here there has never been a shooting accident where he was called to respond.

“I have found safety violations like crossfire situations or OHVs riding in the target area or exploding targets. Fortunately I have never had any medicals,” he said.

He hopes one day the land can be turned over to the people.

“I am hopeful that at some point the county will absorb the range and actually have a professionally run range. There has just been a lot of politics involved trying to make that happen.”