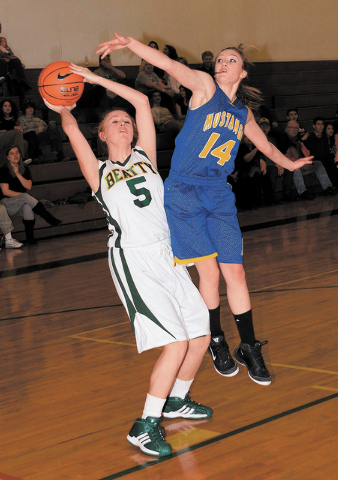 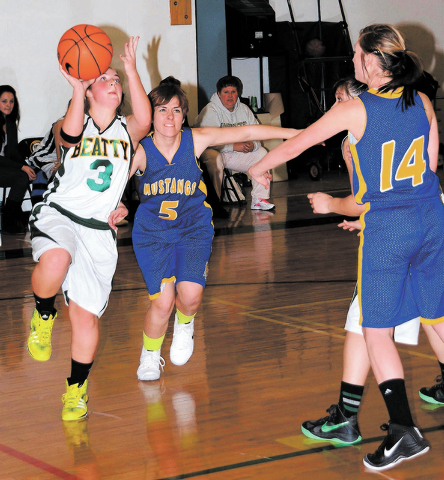 The Lady Hornets just refuse to quit as they defeated the Indian Springs Thunderbirds 33-27 in a close game.

Beatty dominated in the first half outscoring the T- Birds 19-9.

Hornets coach Aimee Senior said the T-Birds did not give up and came back.

“We started the game strong, settled into a comfy second and third quarter, and then Indian Springs came out in the third quarter playing hard so we had to get off of our heels and onto the balls of our feet and step up our pace,” Senior said.

Indian Springs played some stiff defense in the second half and only allowed 14 points.

“She is working all the time, all over the floor. She shot the ball, got her own rebound, stole the ball, and played hard defense. She plays 110% all game long. She steps up the pace and that helps everyone else step up too,” Senior said.

The coach also said Denise Gonzalez scored 12 points which was a great help in winning the game.

The Lady Hornets have a good chance at finishing in third place with a victory over Adelson. They are assured a playoff spot since the top six teams go. The Hornets have to be on top of their game to beat Pahranagat Valley on Friday. PVHS is undefeated. The Hornets are 4-2 and tied with Lund. Lund must play Adelson and finish with Tonopah.

Everyone in the town of Beatty is pulling for their boys to make the playoffs. The Beatty men’s basketball team took a step closer to reaching its goal on Friday night as they beat the Indian Springs Thunderbirds soundly 68-19. The Hornets need to win one out of the next two games to get into the playoffs.

The team improves to 3-3 in league play and traveled to play an extremely good Adelson team on Tuesday. The score was too late to post. The Hornets then return home to play Pahranagat Valley on Friday at 7:30 p.m.

Nick Zamora was selected as the player of the game against the T-Birds. He had 23 points, 3 assists and 5 rebounds in the game.

Beatty’s Coach Joe Serrano said he is focused on two games but is more focused on the Pahranagat Valley game at home on Friday.

“We are ready for both games. I saw Adelson play Tonopah last week. They are a well-rounded team. They will be tough to beat. They are a lot like Spring Mountain in they run and they press. They are pretty well coached too, so we will have to play our best basketball to beat them. They are pretty good and they play like they know how to play basketball,” he said.

Serrano thinks his team played their best against Word of Life and said his team needed to play better than that to beat Adelson.

If the Hornets can’t pull off a win on Tuesday, they know they will have to play a hard to beat Pahranagat Valley Panthers team on Friday. If the Panthers win they are in the playoffs and Beatty stays home.