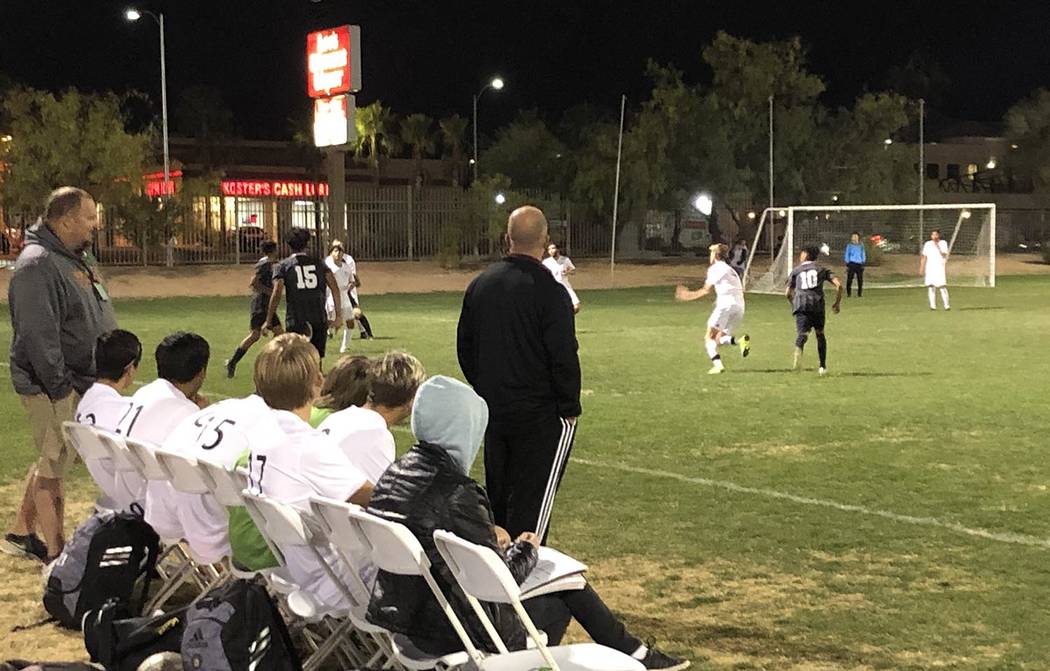 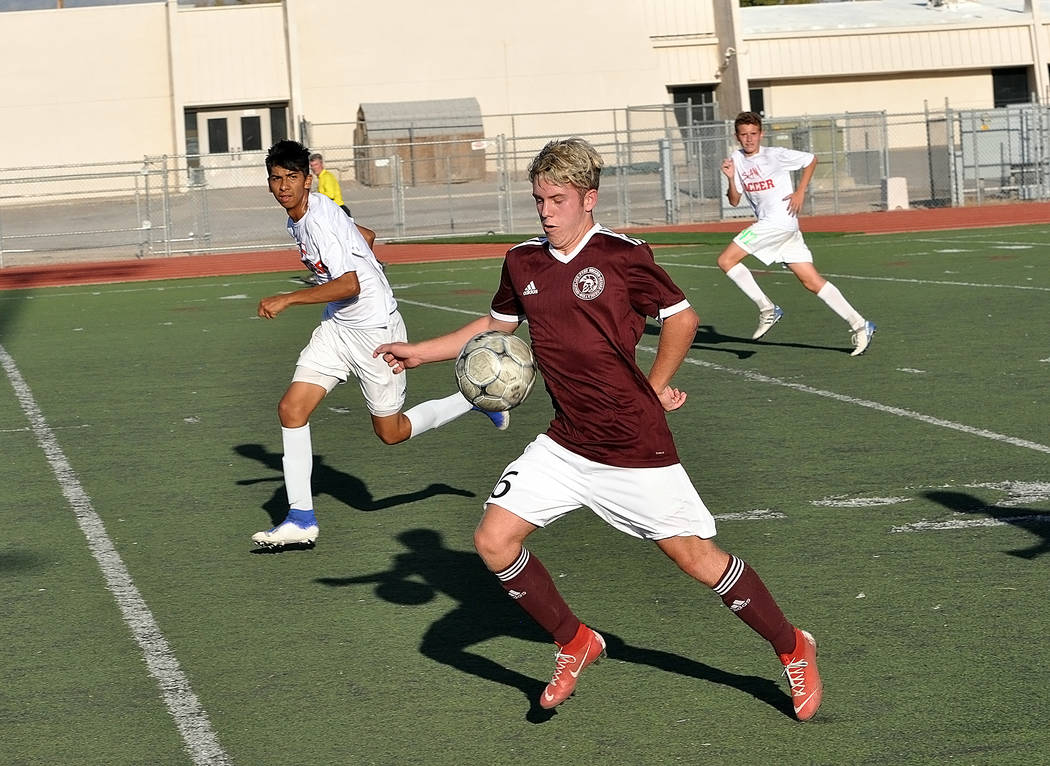 Horace Langford Jr./Pahrump Valley Times Pahrump Valley sophomore Christian Mott, shown earlier this season against SLAM Academy, scored the Trojans' only goal in their 4-1 loss to Chaparral in the Class 3A Southern Region Tournament on Tuesday in Las Vegas.

The Cowboys (14-7-3), a perennial playoff team, have defeated Class 4A schools Palo Verde, Green Valley and Durango, tied Class 4A Silverado and have lost to teams such as Bishop Gorman and Tech, the top two teams in the 4A Mountain League.

Throw in the fact the Cowboys play at a faster pace than most teams the Trojans have faced, and it was clear it would be an uphill fight. But the Trojans, after a poor start, competed well in a 4-1 loss in the tournament quarterfinals Tuesday at Bettye Wilson Soccer Complex in Las Vegas.

“We made two mistakes early on which ended up in goals which set a bad tempo at the beginning,” Roberts said. “It’s a little hard to come back from that. I knew they were a high-paced team, and we were prepared for that. If we don’t give up two early goals, the momentum wouldn’t shift.”

But it did, and Pahrump Valley found itself down 2-0 just 10 minutes into the contest. It could have been worse shortly after that, but junior goalkeeper Ulises Salazar made a terrific save off of a Chaparral header, then gathered in the ball to prevent a rebound.

Salazar had another fine save on a short-range header early in the second half, then followed that up with a diving save to rob Cowboys midfielder Dylan Ezquivel during the 51st minute.

“He did have some good saves,” Roberts said. “It’s his first varsity year, and he’s a senior next year. He does have some really good moments, so it’s something to work with.”

But after sophomore striker Tiesen Medler put the Cowboys ahead 3-0 in the 32nd minute, there was little doubt about the outcome. The Cowboys were too quick and too skilled to blow a lead, but the Trojans played close to even with them the rest of the way.

“They kept going, they kept fighting, and I’m still proud of them,” Roberts said.

Senior Alexander Caro’s second goal of the game padded the lead to 4-0 15 minutes into the second half, and for much of the rest of the game things were calm. In the final 10 minutes, the Cowboys did bang a shot off the crossbar, and Salazar had to smother the ball in front of a charging Chaparral striker. But the ball didn’t hit the net until mass substitutions the Cowboys made with roughly 5 minutes to play.

That gave Pahrump Valley an opening, and sophomore Christian Mott made the most of it. Mott had several dangerous runs before the end of the game, finally putting the Trojans on the scoreboard with a grounder into the net during the 37th minute.

Mott followed that up with two more chances, the first which started off of a nice flick by Abraham Alvarez and ended with a breakaway shot over the goal, and the second which ended on a shot off the crossbar off of a throw-in,

“They subbed out most of their team, but he made some good runs,” Roberts said.

The Trojans end their season in the same place they did last year, the first round of the region tournament. But a program that went a decade without even reaching the postseason is heading in the right direction, Roberts said.

“We’re always looking to do better than we did before,” he said of his 11-7 team. “We finished fourth last year and went to the regionals for the first time in a long time, and this year we finished third and went to regionals again.

“I’m happy with the progression that they’ve made. They work hard, and that’s all we can ask for from all of them. We made some mistakes, but we did work hard and that makes a difference.”

Eight starters will be back next year for Pahrump Valley, which will lose Abraham Alvarez, Tristan Coleman and Koby Lindberg to graduation. While that list includes the team’s leading scorer, a steady defender and the primary taker of throw-ins and goal kicks, there will be a lot of experience on the field next August.

“We have some things to look forward to for next year,” Roberts said.