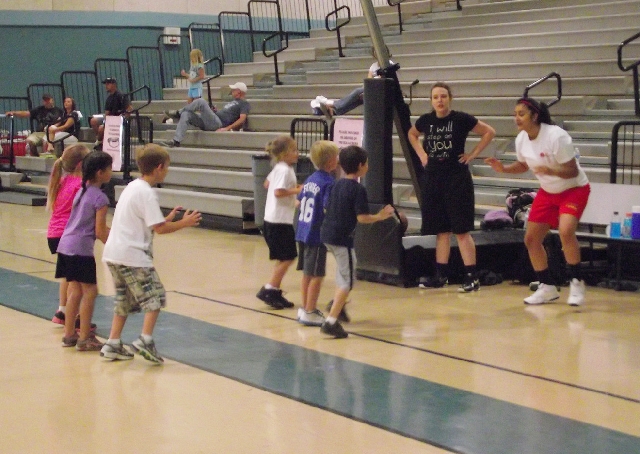 One thing young, aspiring athletes can look forward to every summer is basketball camp. Last week was the opportunity for young athletes to get a week of fundamentals and to learn the basics of basketball.

Trojans Coach Jennifer Hagstrom was happy with the turnout.

Hagstrom said, “Camp went well as usual. We got about 75 kids. Its a good tool for the younger kids to see the correct way to do things. As long as they practice things correctly, they will get better. It is a good way for me to see what we have coming up.”

The camp has been held for years, and many of the same athletes show up every year to hone their skills and develop new ones. In fact, the camp has developed some very good athletes.

“I have seen a lot of improvement, the last two years especially. We have a great incoming freshman class and a lot of them started basketball at our camp, that was their first exposure to basketball,” Hagstrom said.

Those freshman, and future classes to come, have a lot of potential.

Hagstrom said, “We will have some freshman pushing for spots on varsity this year and most definitely next year. We will definitely have a freshman come up to play post. Our league isn’t very big right now.”

The freshman class, however, may not be able to fix all of the holes in the varsity team next year. Despite having some very good athletes returning next year, there is still one hole that Hagstrom is not sure how to fill this year.

“We are still in need of a point guard,” she said. “Alyssa Murphy’s a great athlete but her strongest spot is at the wing. She is at the point position right now. We have some good athletes at RCMS right now. We are waiting for a point guard. We got a couple of those coming up in a year.”

Hagstrom, in hopes to help develop her team further, is going to host open gyms Mondays and Wednesdays throughout the summer.

“We are not going to camp this summer because every kid has a job or has committed to the LDS girls camp that is held that same week,” the coach said. “Nobody else could get the time to do it. We could have gotten the team out from the middle school but I wasn’t going to only bring one team to camp. We have money saved through fundraising over the years but the kids just can’t make it.”

Hagstrom is hoping for good attendance at the open gyms so her athletes can get extra practice and have time to get better. Her biggest focus for the summer is shooting.

“Our biggest deficit is not our defense,” she remarked. “We had one of the better defenses in the league, we just can’t core. We are spending the first hour of open gym trying to get them to shoot. We don’t have a lot of kids show up for open gym so it’s hard to expect that they are going to get any better if they are not going to put the time in.”

Open Gym is held Monday and Wednesday at the Pahrump Valley High School main gym from 5 p.m. to 7 p.m.