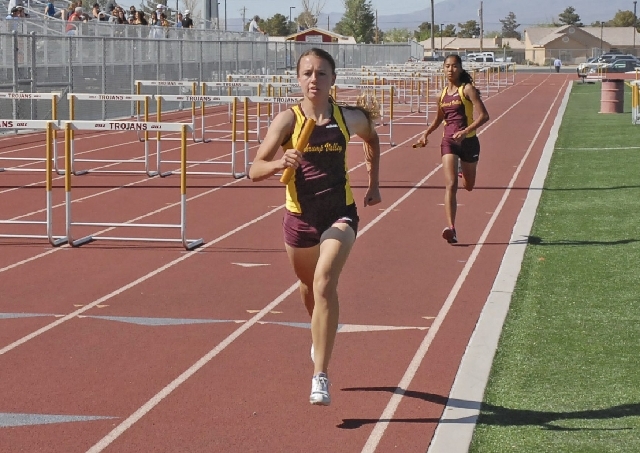 Trojans varsity coaches are taking on club sports at Pahrump Valley High School. The coaches want changes in the way club teams operate at the school.

By taking on club teams they are going head-to-head with girls soccer coach Pam Larmouth and her assistant Joe Sladek who have most of the girls involved on the soccer team in club soccer. Sladek is also the head coach of the girls soccer club team.

Why are the girls soccer team members so heavily involved in club soccer? The answer is simple, colleges now rely on club sports to recruit college athletes. If a high school athlete wants to be noticed by a college, he has to join a club team.

Colleges send recruiters to large club tournaments called “college showcases,” where the recruiters can look at hundreds of talented athletes all in one tournament.

In the past two years, all of Larmouth’s seniors have gone on to college and a few have been recruited by colleges to play soccer. Graduate Kaitlin Klem was one of those athletes and senior Sydney Sladek is another. Sladek has a verbal commitment to play for the University of Southern California.

Last spring the track coaches had an issue with some club soccer players leaving track to play club soccer.

Last year Trojans Athletic Administrator Chris Brockman tried to rally his coaches around a unified stance limiting club sports and the amount of hours played. At this point, it is not known the scope of his support because most coaches are still out for the summer as well as Brockman. None of the coaches could produce a rule, but they said one is coming.

Trojans track coach Ed Kirkwood alluded he is tired of club sports interfering with his season. Kirkwood was very emotional about the topic and he expressed some strong feelings on the issue.

“Are we declaring war on club soccer? I don’t think it’s a war, but will be an issue,” he said. “I got kids missing practice. I have kids missing meets to go to a practice, not a game but a practice,” he said. “Let’s see, will a wrestler go up to Rieger and say I can not make the Faith Lutheran meet because I’ve got to go to an out-of-season practice?

“We are the ones in season. Club soccer thinks they are above the school thing. Your high school team should take precedence, and I went around and around with it. I cut a lot of kids a lot of breaks. I was not real happy. Some people were going to pull their kids. Some words were exchanged — some ideas were exchanged.”

Kirkwood even had conversations with other track coaches in Las Vegas about this issue.

“The Vegas coaches told its teams if anyone was in club anything, don’t even bother with coming out for track,” the coach said. “‘We are not going to deal with it,’ the Vegas track coaches said. They said they took their lumps for a couple of years and kids did not come out.

“Last year I had kids that came to me and said, ‘Can I leave practice early to go to my club?’ and they did not miss any meets. They managed to work it out. Then you had the ones that don’t care.”

Kirkwood believes the Nevada Interscholastic Activities Association will have to rule on the matter.

As Kirkwood spoke, he eased up a bit on his tone.

“I have not yet decided to enact a rule yet,” Kirkwood said. “If it is just one kid or two kids, I will work it out with them, I am flexible. I think it’s going to come down to each individual sport saying something. I think the NIAA will come in and say that the in- season sport takes precedence.”

Last year, when the Assistant Director of the NIAA Donnie Nelson was asked about limiting hours kids played in club, he said there was not much the NIAA could do. He was talking about regulations that would seek limiting the amount of time a student athlete played a club sport. He feels there is no way the NIAA could monitor hours.

Head wrestling coach Craig Rieger came out in support of Kirkwood and Brockman. Rieger is also an assistant track coach.

He says he supports athletes who want to participate in club. He strongly supports club sports to the point where it doesn’t interfere with high school sports. As soon as it interferes, he draws the line.

“If there are clubs out, I think that is great, but it is extra. I don’t have any problem doing both. If a coach thinks that club is better than a school, I just don’t understand that. You want to win state championships for your school and town for whatever reason. What is better than a varsity state championship for your school and your town? They say club is better, but I say anyone can do club.”

One other coach from the spring came out in support of the track coaches and that was Trojans softball coach Elias Armendariz. He also believes kids can enjoy club and play other sports, but not at the varsity level.

“I really have no problem if they are junior varsity, but if they make a commitment to play varsity it’s not just about them,” he said.

Armendariz explained other girls on the varsity team will depend on those girls being there. He said girls in a club sport at the varsity level have to make a choice.

“I had a girl that had to leave during a softball tournament to attend a soccer game last season. Last year it worked out,” the coach said.

Armendariz said as this girl becomes more skilled in softball it might not work out next season.

The softball coach said there was a meeting on club sports last spring with Brockman and he believes rules are coming down.

“We need three-sport athletes at this high school. You have all winter and all fall to play other sports,” he said.

Larmouth said the track coach had complained to him. She believes Brockman will leave it up to the individual coaches.

One of the girls missing meets last year was Sydney Sladek, the state champion in the 800-meter in Division 1-A. She loves club soccer and soccer in general and she will not give it up.

“I would choose soccer over track if it came down to it. Soccer is the love of my life,” she said.

Next year, whether or not Sladek and her other club teammates don track uniforms depends on if a compromise can be made.