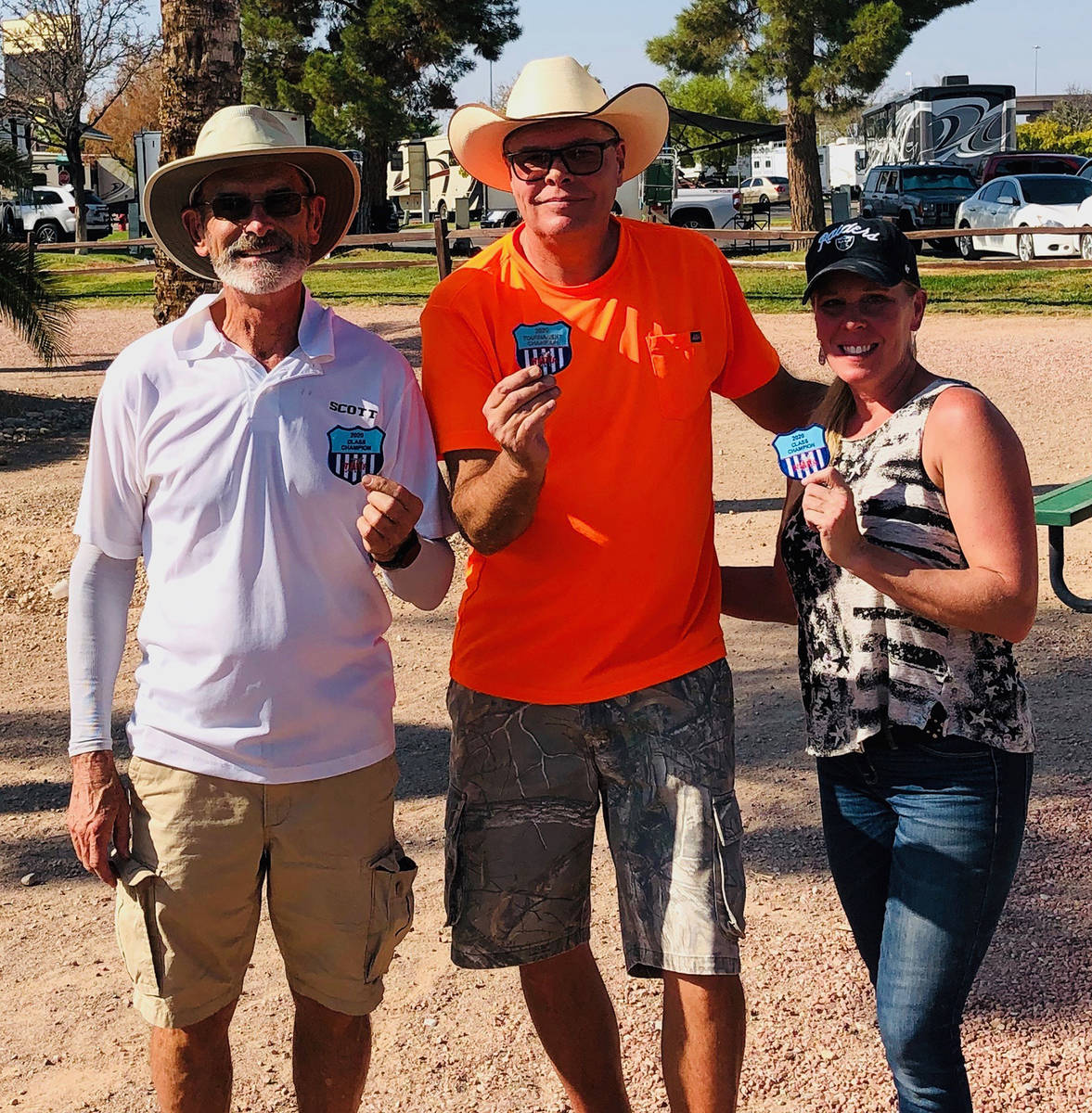 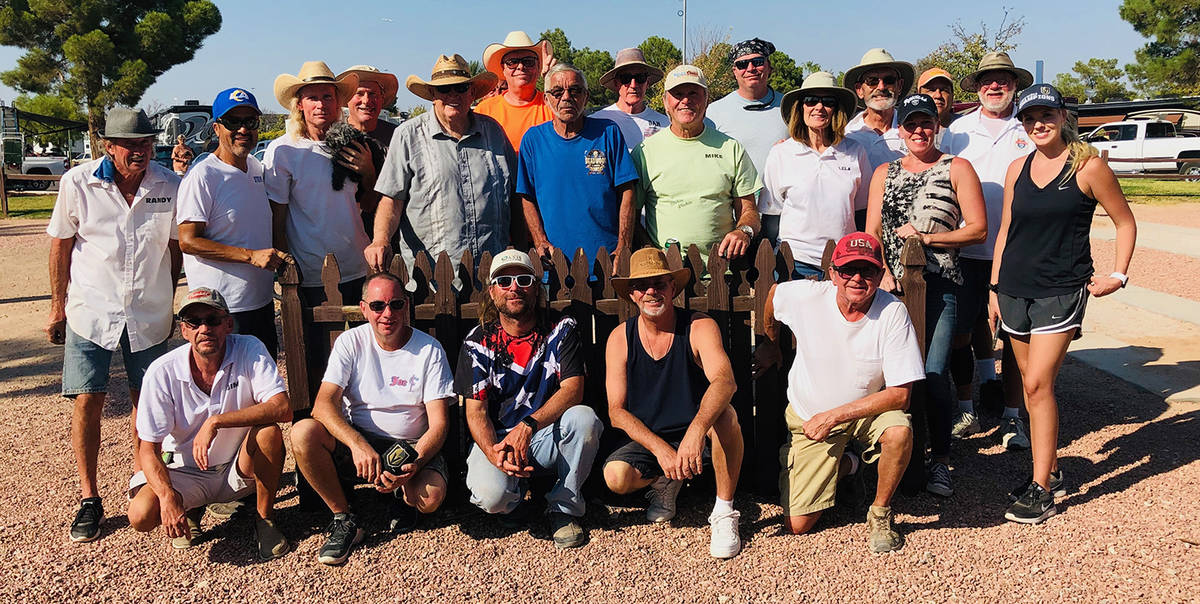 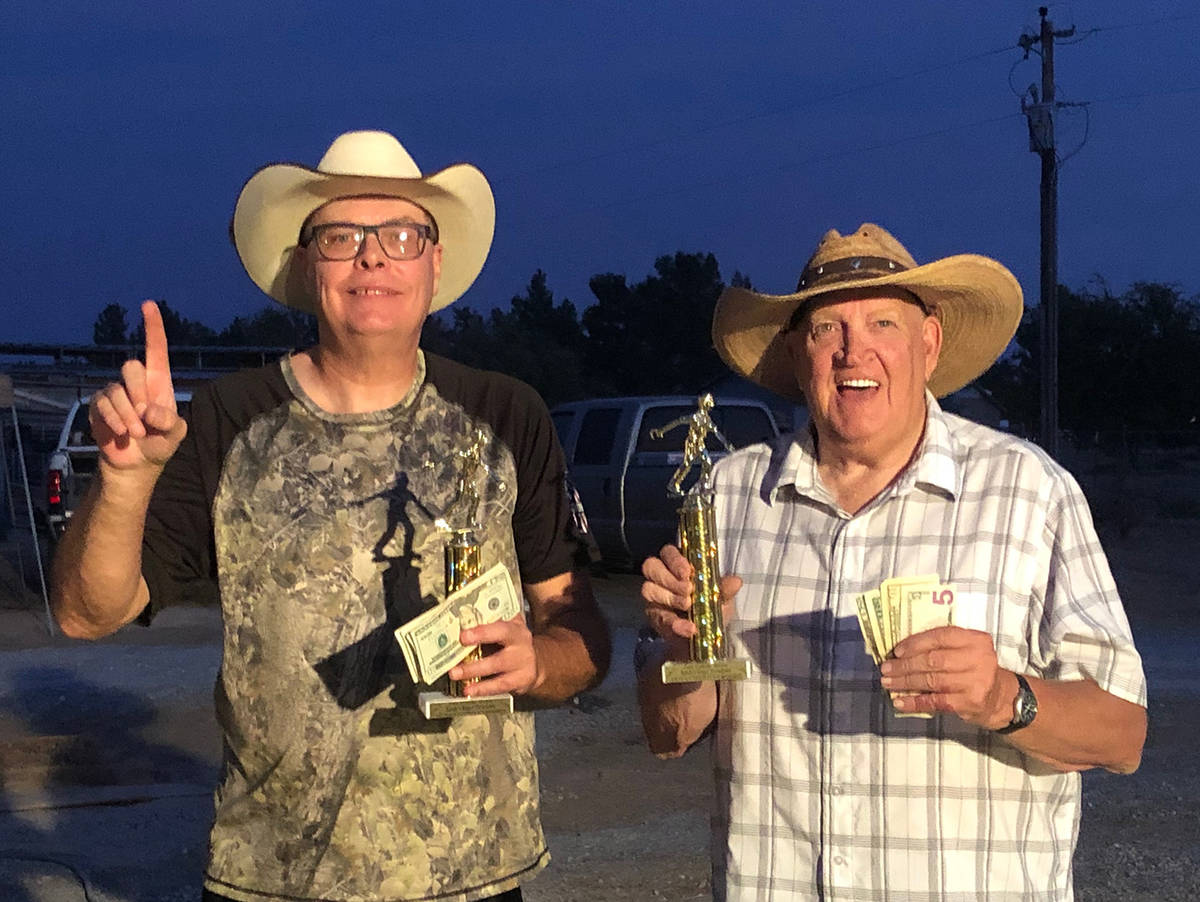 Jim Hatch/Special to the Pahrump Valley Times Lathan Dilger, left, and Dennis Andersen teamed to win Randy's Ringer Showdown, part of the Backyard Summer Series of horseshoes tournaments. Dilger and Andersen went 5-0 in the doubles event to share the $120 prize.

It was one of the most competitive tournaments on the Nevada State Horseshoe Pitchers Association calendar, with three players in Group A finishing the round-robin format at 4-2.

But it was Lathan Dilger’s point total of 263 that broke the tie and gave him the tournament championship at Octofest at Oasis Las Vegas RV Resort on Oct. 3.

Although he finished third, Anderson led the 21-pitcher field with 104 ringers. He was playing with a 6 handicap compared to 14 for Dilger and 21 for Kaczmarek, while fourth-place Steve Lopez of Arizona, who came in with a tournament-best 45.16 ringer percentage, was close behind with 99. Lopez was the only Group A pitcher to play without a handicap.

Meanwhile, Scott Hardy was steamrolling the field in Group B, cruising to a 6-0 record to win the division. His 29.58 ringer percentage was well ahead of his entering percentage of 17.75, and his total of 71 led Group B by three over second-place James Hatch.

Hardy was never threatened during the tournament, never scoring fewer than 31 points in a game while his opponents never mustered more than 19, resulting in an average victory of 37-14 in his six games.

Playing in her first sanctioned tournament, Sheri Dilger — who is married to Lathan Dilger’s brother, Gary, who went 2-4 in Group B — went 6-0 with 36 ringers and 153 points to win Group C. Another Dilger brother, Steve, went 5-1 to finish second, losing 28-18 to Sheri in the final round-robin game.

Sheri Dilger’s ringer percentage of 15.00 was a full 50% higher than her entering percentage, and the closest anyone came to beating her was her 26-18 win over Lela Hardy.

“We had three new players — Sheri, Gary and Audrey Zuloaga,” Lathan Dilger said. “(Audrey) also played well for her first time out. And Lela Hardy is Scott Hardy’s wife, so we had three women in this tournament.”

As he has said in the past, one of Lathan Dilger’s goals as the association president is to bring in more females and juniors into horseshoes. Another is to bring in more sponsors, and Port O’ Subs sponsored Octofest and supplied a tray of sandwiches for the pitchers.

While the sanctioned tournaments are more prestigious, pitchers are being introduced to organized horseshoes through nonsanctioned events such as the Backyard Summer Series. A week before Octofest, Randy Salzwimmer of Pahrump hosted the latest tournament in that series, Randy’s Ringer Showdown. Six doubles teams participated in the event, with Pahrump Valley Storage providing the trophies.

Dilger and Andersen teamed up to go 5-0 to win the championship, with Dilger donating his share of the $120 first-place prize, generated by a $10 per player entree fee, to the Southern Nevada Horseshoe Pitching Association, of which he is also president. George Mallory and Rai Adams went 3-2 to tie Kaczmarek and Dave Barefield, with Mallory and Adams finishing 3 points better to claim second place.

Next up for the pitchers is the Nevada state championships, which will be held this weekend at the Joe Friel Sports Complex in Tonopah. The championship tournament is Saturday, with a nonsanctioned doubles tournament Sunday.

“Then on Oct. 17 we’re back at the Oasis RV Resort for the Oasis Fall Open, then to Beatty on Oct. 24-25 for the Beatty Boo, the last sanctioned tournament of the year,” Lathan Dilger said.

Dilger continues to look for new pitchers to join, especially females and juniors, but anyone interested is encouraged to call Lathan Dilger at 775-751-4813 for more information.