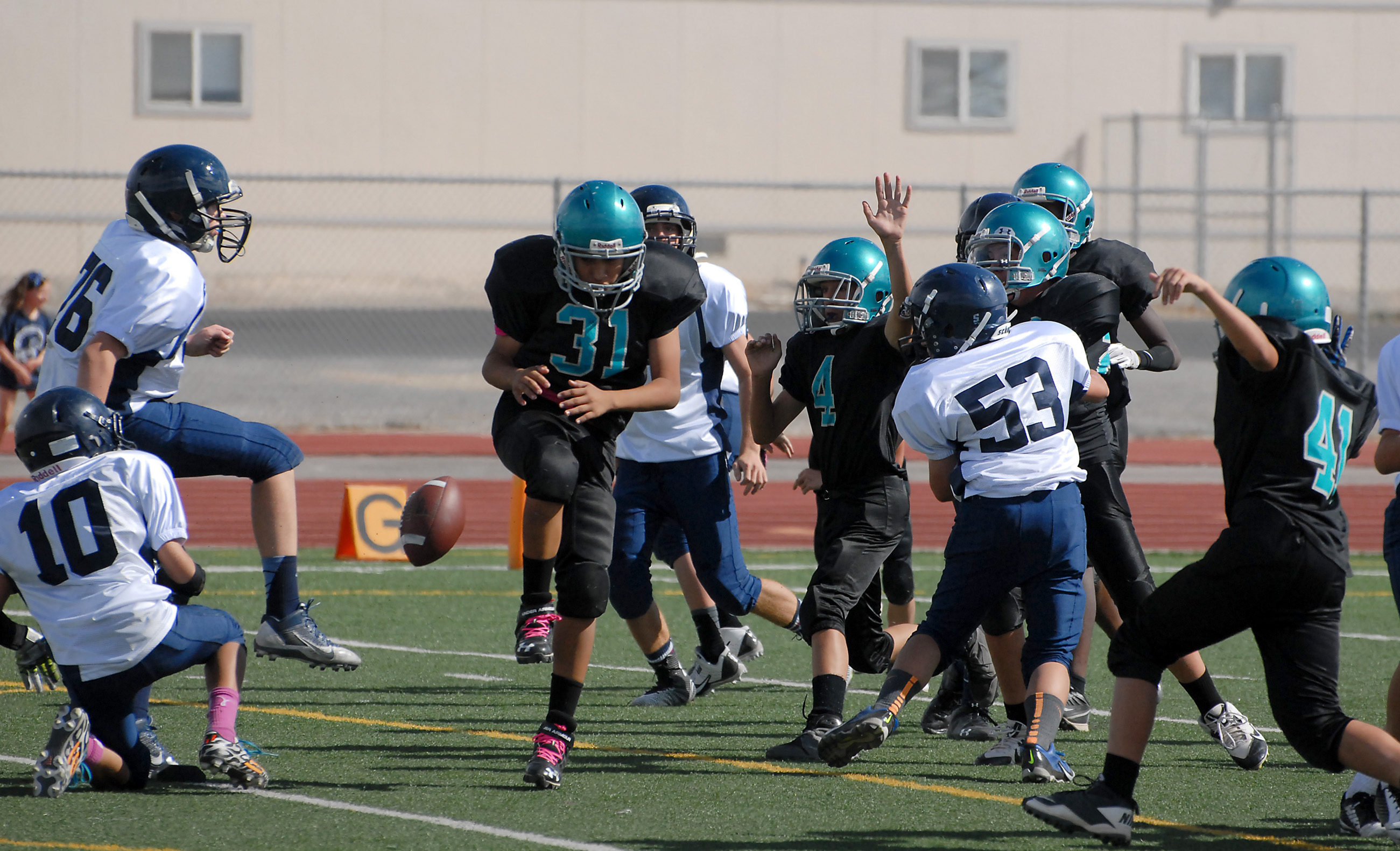 The nation’s football fans were in mourning for the three high school students who died playing the game they loved at the end of September. The deaths have refocused the nation on head injuries and concussions and the safety of the game, which brings fans to the question, should our youth be playing this violent sport and is it safe? And can the game be made safer? The experts say youth under 14 should not be playing the sport but one mother speaks out and is out to save the game.

The experts can’t say quite yet what age should be playing football, but they do agree on one thing and that is children too young can be at risk.

Dr. Robert Cantu, a clinical professor of neurosurgery at the Boston University School of Medicine, has said research by him and other neurosurgeons say that football for younger kids should not be played until the brain has had a chance to mature. He says younger brains are more susceptible to brain damage from significant hits and kids should wait until 14 to play football.

Cantu said by age 4, the heads of kids are 90% of adult size. He says their necks are not as strong as adults and when a child takes a significant hit in the helmet, the result is a greater force to the brain. This can be more dangerous to kids because their brains are still developing.

Pop Warner is one of the largest youth football programs in the nation and has already seen a 10 percent decrease in participants nationwide. This is because of the recent research coming out and the focus on head injuries in the NFL.

In Pahrump, parents are worried about the safety of their children, but still feel the game is safe. Parents are under the opinion that the game safety has made some huge strides over the years.

Craig Swan, a sales representative for Pahrump Valley Auto and a parent, has a son who played football with the Rosemary Clarke Middle School Sharks.

“Of course you worry about the safety of the game, but you have to rely on the coaches teaching them the right way to play and that they are giving the kids proper water breaks. Also teaching them not to lead with their heads when they tackle,” he said

Swan believes head injuries are down because of coaching techniques and better equipment.

Dale Giessler, a big football fan, has a son that plays freshmen football at Pahrump Valley High School. He said the three deaths were tragic but he is not overly concerned with the safety of his son.

“Things happen and you can easily die from a car accident,” he said. “I basically saw him tackle with his head one time and told him not to do it. I think it is all in the coaching they receive and out here the coaching is fine,” he said.

If Pop Warner loses kids and basically fades away, this can deal a huge blow to football.

Football fans locally know that if this spreads to Pahrump it could affect the middle school and high school programs which have not seen a decline.

Jeff Koenig, head Rosemary Clarke football coach, said the opposite has happened. “I had an increase in interest football with 90 kids coming out.”

The high school also had a similar increase.

The game is changing and the changes can be either harmful to the game or it can help the game.

At least this is the belief of Brooke De Lench, founder of the MomsTeam Institute and a mother, who had sons play football. Her nonprofit institute has been leaders in youth sports head injuries for the past 15 years. She believes that Pop Warner and youth football can be saved if the sport is willing to make some changes.

In 2011, MomsTeam was invited to the high school in Newcastle, Oklahoma to come up with solutions. At that time New Castle had 166 players playing the game, and had a concussion rate of 10 percent.This meant that 16-18 players suffered from concussions each year.

Football is big in newcastle but the high school threatened to close down the program if things didn’t get better. De Lench said she went to their school board to save the program.

“I gathered my team of experts and we spent a whole year at the school,” she said. “We told them we could save the program but they had to allow us to make a film.” (The documentary is finished and called: The Smartest Team http://www.thesmartestteam.com/) De Lench told the school board that she could reduce the amount of concussions to 50 percent.

To do this she and her team introduced the high school to new concussion protocols. Her team has six of them, which they call the Six Pillars of Concussions. De Lench said these protocols are far more extensive than what the National Federation of State High School Associations.

“We go above and beyond existing protocols,” she said.

The first pillar is comprehensive concussion education, which is based on experts like Cantu.

The second pillar is based on protection. This covers properly fitting each player with helmets, training players to tackle and block correctly and finally looking at the rules which limit helmet-to-helmet contact.

In the third pillar, the founder and her team addressed Newcastle and how they identified concussions. Early identification of a problem is crucial said De Lench, especially since most concussions do not come from without loss of consciousness or other obvious neurological signs. The Newcastle team was outfitted with new helmets with impact sensors on them for early detection.

“This is why we put impact sensors in the helmets. The most important part is to alert a coach when a significant hit has occurred. This is a way of monitoring and a tool. It will not diagnose a concussion, but it will alert to a big hit,” De Lench said.

De Lench did say that technology is capable of tracking the number of hits. She says the research does not yet support that there is a “magic number of hits” a person can take.

“In California, the amount of hitting has been limited on the practice field,” she said. “But there are no studies that support a certain ‘hit threshold’. The high schools are limited to two days of hitting and they get around this by extending the length of practice. I think tracking the amount of hits will ultimately hurt the game. Kids get excited and will hit those sensored helmets out of excitement. This could record false hits and then when you want to play your star player, you can’t because of the amount of hits.”

Pillar four is conservative treatment. In this pillar, along with coaches and trainers, the parent plays a crucial role in keeping their child safe.

“No matter how mild a concussion may seem, it is important to always remember that it is a traumatic brain injury and needs to be treated seriously,” De Lench said.

This requires the “optimal time” for recovery, the exact amount of time is still not known but common sense dictates in this case.

The fifth pillar is a cautious return to play. This makes sense. One doesn’t want a player coming back too early and just reinjuring the brain.

The sixth pillar is retirement from play. What is too many concussions? This is not yet known, but players should realize that concussions are not to be played with. The recovery will be slower, there will be cognitive loss, and concussions occur with less force to name a few.

“It’s important to teach kids that leaving a sport is okay. And it’s OK to find a different sport,” DeLench said.

De Lench and her team reduced the Newcastle team concussions by 75 percent with those pillars and the program was saved.

As far as throughout the country, she firmly believes that concussions are down due to education.

This could mean a hybrid game. A game where hitting is reduced.

“I really don’t think it has been proven that the kids at Pop Warner hit hard enough. We put sensors on kids in Pop Warner and we are not seeing significant hits at that age,” De Lench said. But her institute is within three weeks of introducing a hybrid game. She still thinks some modifications would be better for the safety of the kids.

“We think the game should be modified at the Pop Warner level.” She said helmets would be made lighter. “Taking the face mask off is an option to make the helmet lighter. You have a five-pound helmet on a 60-pound kid and as the game goes on the kids get tired and lower their heads when they tackle.”

The game might even go to flags for the younger kids. The problem is that Pop Warner has some heavy backers that might not want things to change like the helmet industry. This can be countered said De Lench.

“We need equipment standards at that age level. At the moment, there are no standards,” she said.

The founder says change is coming and she believes her organization to be the voice of reason. Who knew that a group started by “moms” would be leading the nation to save the sport?

“We have been out here teaching safety for the past 15 years. We are pioneers in the field and are an objective voice of reason. We need to stop listening to the zealous people. We can show them how to make the game of football safer for all,” De Lench said.