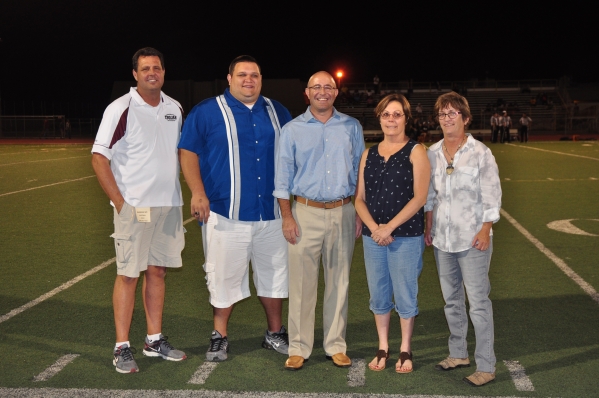 The Pahrump Valley High School Athletic Hall of Fame opened the vault to past glories and inducted five new members into the hall of fame at Friday’s game, bringing the total to 64.

Wines was a graduate of PVHS in 1979 and played basketball, volleyball and ran track.

She said her proudest moment was when she was a member of the girls 1978 state championship basketball team.

In track she ran the mile and the half mile. While in volleyball she was a member of the 1979 zone champion team.

After graduation she attended the University of Nevada at Reno and UNLV. She graduated from UNLV in 1985. Upon graduating from college she went into teaching and taught for Clark County for five years and then transferred to Douglas County in 1990, where she taught and coached at Whittell High School for 25 years.

Wines will retire this year after 31 years in education.

Kaucky Richardson was a 1981 graduate of PVHS, where she excelled in sports and lettered in varsity, four years of volleyball, three years in basketball and four years of track.

She now resides in Riverton, Wyoming with her husband Joe Richardson. She owns her own nail tech business and has one daughter, Nikki and two sons, Daniel and Levon.

Giannotti was a 1990 graduate of the high school where he was an excellent student athlete. He was elected student body president and was the class valedictorian. He played basketball and golf and was a four-year letterman in both sports.

Giannotti was on the first golf team at PVHS and made first team all division and was a medalist in the zone tournament his senior year.

Giannotti has a wife, Amy and two daughters, Allie and Maren.

Lopez was a 2008 graduate at the high school and lettered in wrestling (4 years), football (2 years), baseball (3 years) and track (1 year). He was an honorable mention offensive lineman during his senior year.

Lopez excelled in wrestling and was the two-time Southern zone heavyweight champion. He took third at state his junior year and was the state runner-up his senior year. In 2008, he helped his team win the state championship.

After graduation, Lopez continued wrestling at Dickinson State University in North Dakota, where he was the regional champion and took third at nationals. He was named an All American.

Lopez resides in Las Vegas, where he works security at the Hard Rock Hotel and Casino and officiates football. He coached the varsity wrestling team at Del Sol last year.

Taylor came to Pahrump High School in 2006 as an athletic trainer but had his start in Mesa, Arizona. Although he was never a Pahrump athlete, he is being honored for his years of dedication to Pahrump athletics.

He grew up in Mesa and then moved to Gallatin, Missouri, where he graduated from high school in 1980. After serving his two-year mission for the LDS church in Hawaii he attended Mesa Community College.

He then married Laura Casaus in 1985 and now has four children: James, Marie, Kyle and Christian.

He finished his college at Brigham Young University and Park University and then attended Cleveland Chiropractic College, graduating in 1992. Taylor then moved his family to Jordan, Utah, where he found he enjoyed working with athletes. He was the team physician for Hunter High School in West Valley, Utah. He also was the “Doctor of the Year” for the Wilderness Circuit for the Professional Rodeo Cowboy Association.

In 2006, he purchased Affiliated Chiropractic in Pahrump, where he now enjoys working in the training room and on the field for the high school. Early diagnosis and treatment of athletic injuries has become one of his passions.

While in Pahrump, Taylor has been involved in many aspects of the town, serving on the Chamber of Commerce and as a bishop of the LDS Church.