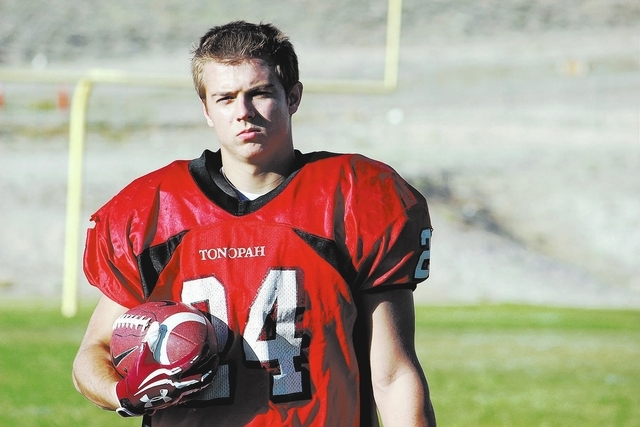 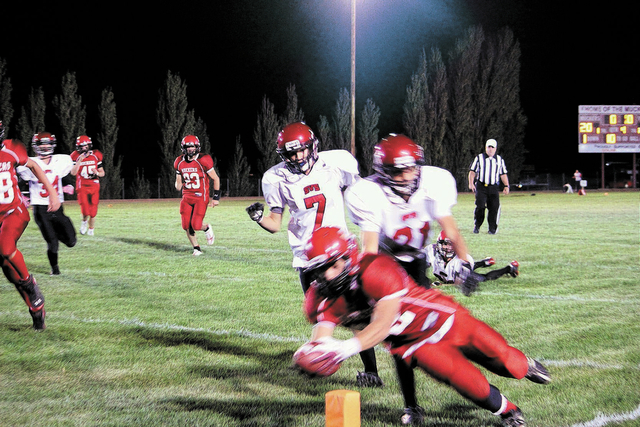 Senior Matt Misener is a running back for the Tonopah Muckers. Misener’s running game has been responsible for breaking a few games wide open. He is 5 feet 9 inches tall and 165 pounds, and runs the 40-yard dash in 4.5 seconds. He is quick and lethal, but most importantly he has heart.

“I am a sweep runner and like to go around the edge and occasionally like to run over people,” Misener said.

This year will be his first and only year as a starting varsity running back because last year Misener sat on the bench watching the Littlefield brothers light up the field, which really didn’t bother him. Misener had just moved to Tonopah his junior year and it took a bit to adjust to his new school.

“Moving to Tonopah was huge. My whole life I lived with my mom and was a mama’s boy. It was a life-changing experience. I knew things at home were not going well. I knew my mom was getting worse. I knew I had to be a man and make a decision that would change my life. That is why I came to live with my dad,” he said.

“It is just a whole different ball game. It was pretty much a learning process. I learned a lot from the new system. Seth and Spencer were really good football players. Seth took hits every game for us and I always wanted to be the guy you could count on. I soaked up everything in my junior year,” Misener said.

After just eight months in his new home, He found out his mother was having problems, so he left Tonopah for about a month to take care of his mother. She passed away from complications stemming from a 2000 car accident, which cost her her leg. She never fully recovered from it.

“I had to figure everything out and had to bury my mom. I came back to school, got my act together and got all my grades in. I had to make sure I passed every class and I ended up doing it with a lot of help from the teachers and staff there. It was great,” Misener said.

Misener became a leader on this year’s Tonopah team. His Coach Duffy Otteson is very appreciative of his talent and his heart.

“Matt is a very good young man and a great leader on our team,” he said. “We have changed our offense this year to incorporate our players and have three very good running backs. Matt is our skat back. He has good balance, good feet, makes good moves to avoid tackles and has a good burst of speed to get to the second level of a defense. Without Matt we would have a huge loss at his position and as a leader on this team.”

His greatest game of the year up to this point has been Sandy Valley. The Muckers were down by a touchdown with just a couple of minutes to go. He led them to victory by scoring the winning touchdown with 15 seconds left in the game. The team won 26-22.

“The last two minutes probably was the craziest game I have ever been in,” Misener said. “We kept on forcing the pass. I knew we could pass the ball. We were passing it great all night. It was there. We just got really lucky on some calls and they called pass interference. I told the line if it is a run play just do whatever you can and I will be there and we will win this game.

“The last play I did not ask for the ball. I did not even expect it. I was thinking we were going to pass because we were passing the last couple of plays. When I got my number called, I looked straight at quarterback Connor Friel and the line and said let’s do this; we got this game. I am going to take it to the end zone.

“The line had a great block and we got a great start off the ball and everything went our way at the end. I knew I was going to get there. The way I was running the ball that night and the way the line was blocking I knew we were going to walk out of there with a win.”

Misener knew somebody was watching over him, but it seemed like just when things were starting to go great something else would happen in his life. After Sandy Valley his family was dealt another blow. His Aunt Shelle Blakemore who lived next door to him in Tonopah died unexpectedly. She was very close to the family and once again Misener had to man up.

His life did not stop. He kept on chugging away and he played in the Round Mountain game, which was last week.

“At Round Mountain, I had my best game all season and that was the week of my aunt Shelle’s death. I dedicated that to my aunt,” he said.

“The week my aunt died I was pretty quiet,” Misener explained. “I only talked to my coach. I did not want any sympathy from anyone. I just wanted everyone to do their job. It was just a pretty quiet night. I honestly didn’t feel like suiting up, but with my dad’s help and some words of wisdom from my friends, I suited up and I am glad I did. It took a while to warm up … it was a rough start.”

Hopefully for Misener things will quiet down again. He wants to finish his year, maybe play some basketball and perhaps attend Southern Oregon University. He said he had a grandma there and eventually his dad would move there. He wants to major in business and maybe play some football if they will take him.

“If I make it great, if not, then at least I know I tried,” Misener said.