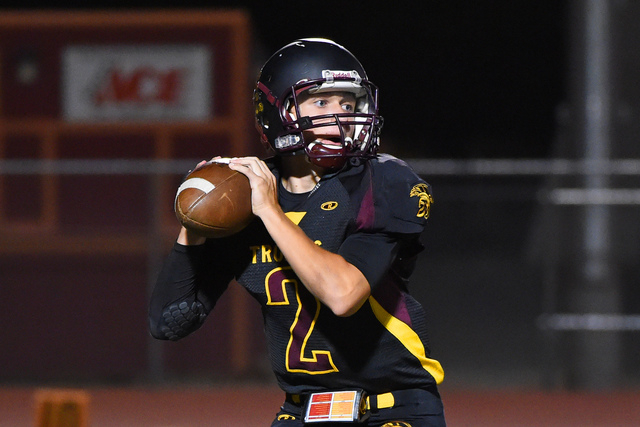 Pahrump Valley High’s new head coach Adam Gent said the Trojans will be going to a version of the spread offense.

The details of the offense haven’t been leaked out yet but there is no doubt about it this coach likes to air the ball out.

For the past two seasons, former Trojans Coach Joe Clayton stuck to the run game. Last year the Trojans pounded out 1,720 yards on the ground and the year before they pounded out 1,620 yards, while passing 911 yards in 2014 and 715 in 2013.

Clayton ran his game from what was called the jet sweep offense. He did this because to him it simplified the formations for his team. He was able to use a lot of motion out of a few base formations to make the offense appear more complex than it was.

I know a lot of readers might be saying this offense is just too complex for high school, but Gent is not running any old spread. He is a follower of Sonny Dykes, who is the head football coach at the University of California at Berkeley and has been there for two seasons in the Pacific 12.

His offenses at Texas Tech, University of Arizona and Louisiana Tech all demolished their school record books for total offense. He is now doing this at Cal.

The Air Raid offense comes from Southern Methodists’ offensive coordinator Hal Mumme, who started it in the early 1990’s.

Dykes put up incredible numbers while at LA Tech (51.5 points per game) and people thought that when he went to Cal that he would bring with him this unbelievably long playbook. The reality for Dyke’s team is that it only takes three days to implement the playbook.

This playbook was talked about in a Sports Illustrated article and the offense consists about 20 base plays, three screens, six runs and 12 or so pass plays. Compare this to former California Coach Jeff Tedford, who had more than 500 plays.

If Gent is a true follower of Dykes, he will keep the spread simple but deadly, like Dykes.

“I have been working this summer on accuracy of my passing and my speed,” Milk said in a recent interview.

The Trojans will use the summer to learn the new playbook.

I feel this new offense will be a breath of fresh air for Trojans fans, who have been asking for more passing for the past two years.

Does Milk have what it takes? I think he does. He is a hard worker who has been going to college camps all summer long, but just because he has been there doesn’t mean the job is his.

Parker Hart, a junior, wants to be quarterback too. Hart is a three-sport athlete who also plays basketball and baseball. So this summer Gent will have to decide if experience is everything.

One thing I like about Milk is he is tall and quick at 6 foot, 1 inch tall and growing. He didn’t run too much last year, but he said he is working on that. Scrambling for some extra yards could help the Trojans with a new offense.

Milk also has a strong arm and I feel he can be coached to be even better in his final year.

Of course, he will have to improve on that 53 percent completion rate. He was 67 for 126 attempts with 8 interceptions. He had 13 passing touchdowns.

Let’s face it, the Trojans have been a running team for most of last two years. The fact that they were pretty much successful passing goes to the offensive line giving Milk time to pass. This is the one question mark that most fans have. Can that line still protect the quarterback after losing so many good linemen last year?

I think being a veteran counts for something and Gent will see that Milk is also a leader and has a strong work ethic.

I personally have seen Milk hitting the local weight room. He may still have to work on telegraphing where he is throwing the ball, but I think all high school quarterbacks struggle with that.

Regardless who the quarterback is this fall, the Trojans will be passing the ball. This should just thrill the fans. The passing attack is back! I am excited and can’t wait to watch the first game.