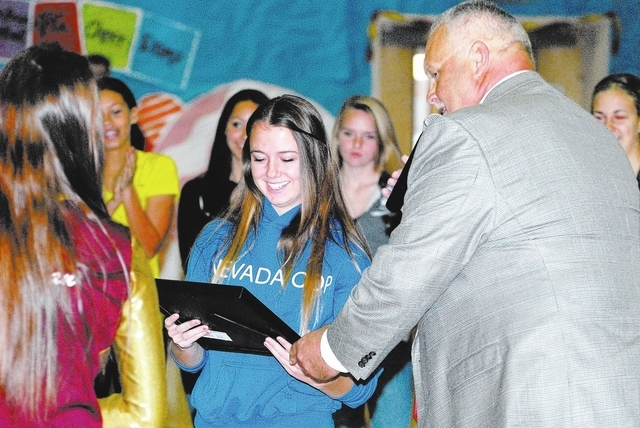 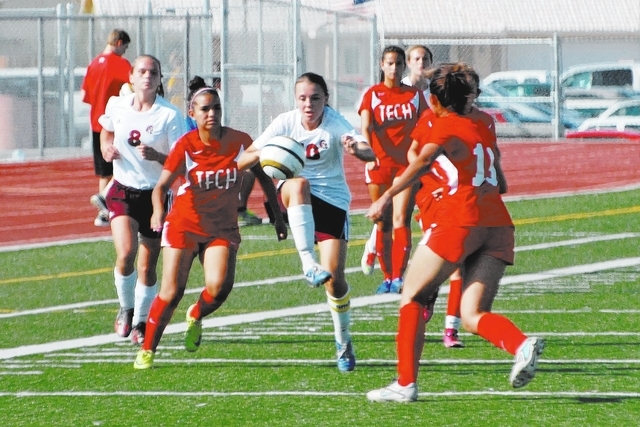 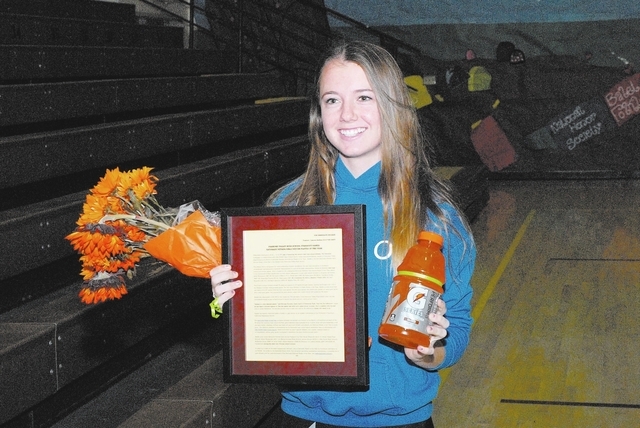 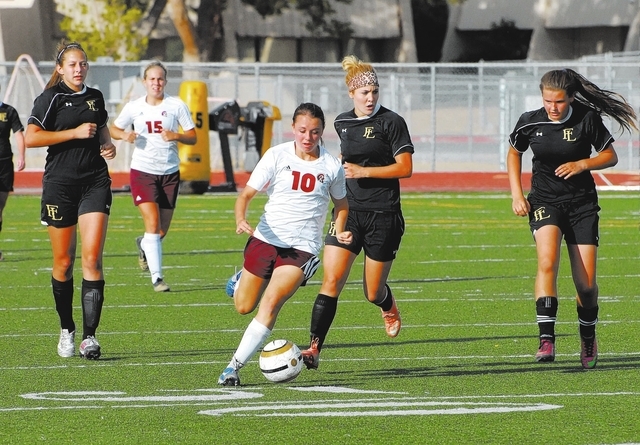 Sydney Sladek will go down as one of the most talented and most honored soccer athletes Pahrump Valley High School has ever known. For the past two years the five-foot four-inch player has led the Trojans to two Sunset League Titles, one Southern Nevada Division Title and one Division 1-A State Title.

On Monday morning, Sladek was presented with the prestigious Gatorade Nevada Girls Soccer Player of the Year award for 2013-14 at a surprise school assembly for her at Pahrump Valley High School. The award is an annual event that recognizes one athlete in each state (the District of Columbia) and both boy and girls in 12 sports.

Sladek knew something was up but had no idea the school would honor her in this way.

Her father, Joe Sladek, said Sydney found out last week that she might win the Gatorade award while monitoring some tweets on Twitter.

“Gatorade gave her the clue, but we were trying to surprise her. Last week Gatorade wanted to follow her on Twitter and some journalist had told her she had won. She then told me and I tried to play it off by saying, ‘I really did not know,’” Joe said

This year will be the first time Gatorade has ever honored a student from Pahrump Valley High School.

Sydney’s final year as a Trojans soccer player was another great year as she scored 75 goals with 27 assists, broke the most goals scored in a career with 207 and was named the Division 1-A Player of the Year for the second year in a row. Last year she scored 78 goals with 27 assists. Also at the end of the year she was honored by Sports Illustrated. In addition to her athletic excellence, Sydney was chosen by Gatorade for her academic excellence. She maintains a 3.9 GPA.

After the season, on Feb. 5 she signed a letter of intent with the University of Southern California. She said this signing with her friends was her most memorable moment of the year, which was right up there with winning the state title last year and the previous year.

This latest honor was frosting on the cake for her.

“I thought the high school sports awards were over except for track. I didn’t think another big thing like this would happen. It is really exciting to be the first one. There have been finalists in the past here but nobody has really ever won it. This has made me really proud,” she said.

When asked if this would be her last hurrah in high school, she replied, “I am hoping in track, my friends and I — Kristen, Ashlyn, Lexi and I do really well in the 4×800-meter relay together as a team. I also want to beat my time in the 800 meter this season.”

According to the Gatorade press release, the award recognizes “not only outstanding athletic excellence, but also high standards of academic achievement and exemplary character demonstrated on and off the field. Now a finalist for the prestigious Gatorade National Girls Soccer Player of the Year award to be announced in May, Sladek joins an elite alumni association of past state award-winners in 12 sports, including Abby Wambach (1997-98, Our Lady of Mercy, N.Y.), Derek Jeter (1991-92, Kalamazoo HS, Mich.), Candace Parker (2001-02, Naperville Central HS, Ill.), Alexi Lalas (1987-88, Cranbrook HS, Mich.), Heather O’Reilly (2001-02, East Brunswick HS, N.J.) and Mark Sanchez (2004-05, Mission Viejo HS, Calif.).”

Sydney said she wouldn’t have gotten to this point without the support of her parents, Trojans Coach Pam Larmouth, and all her teammates.