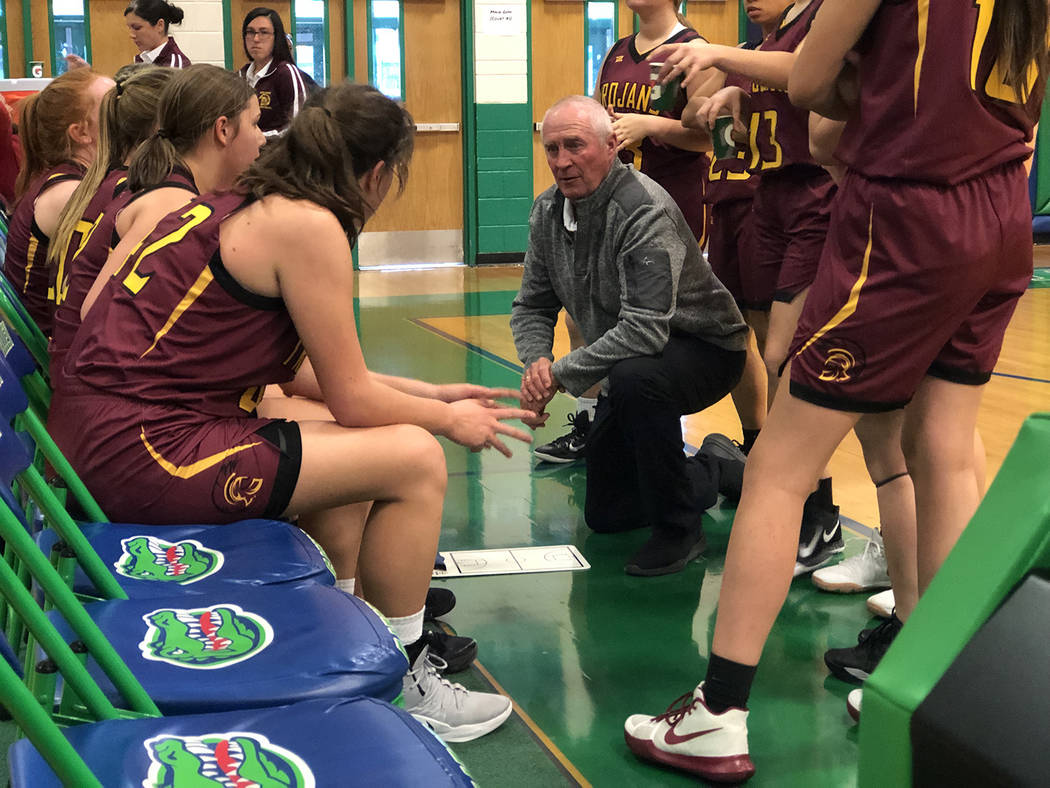 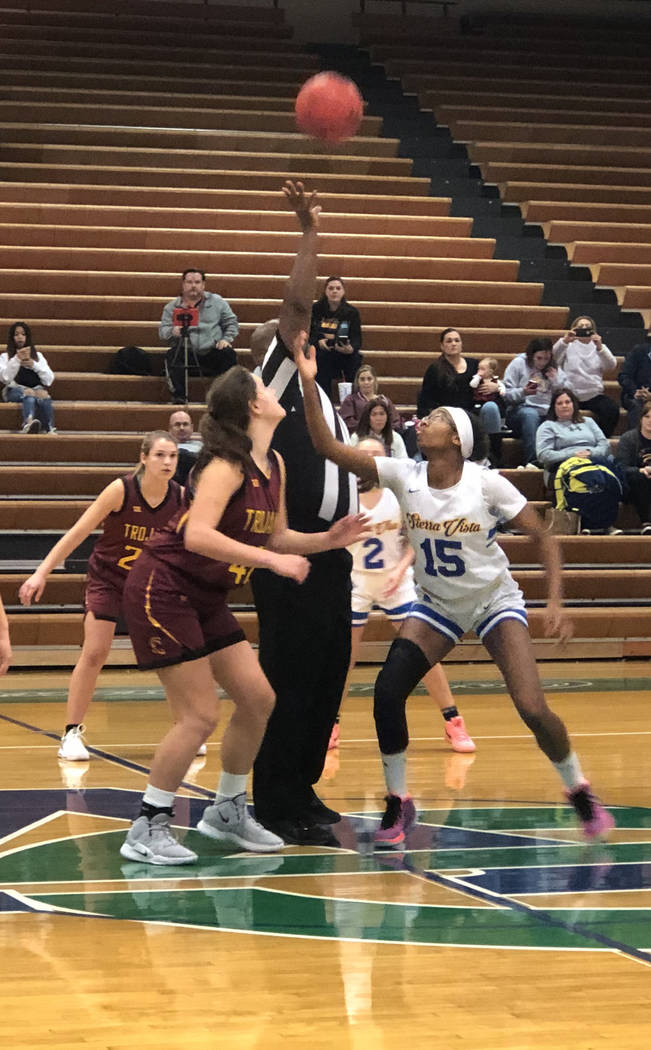 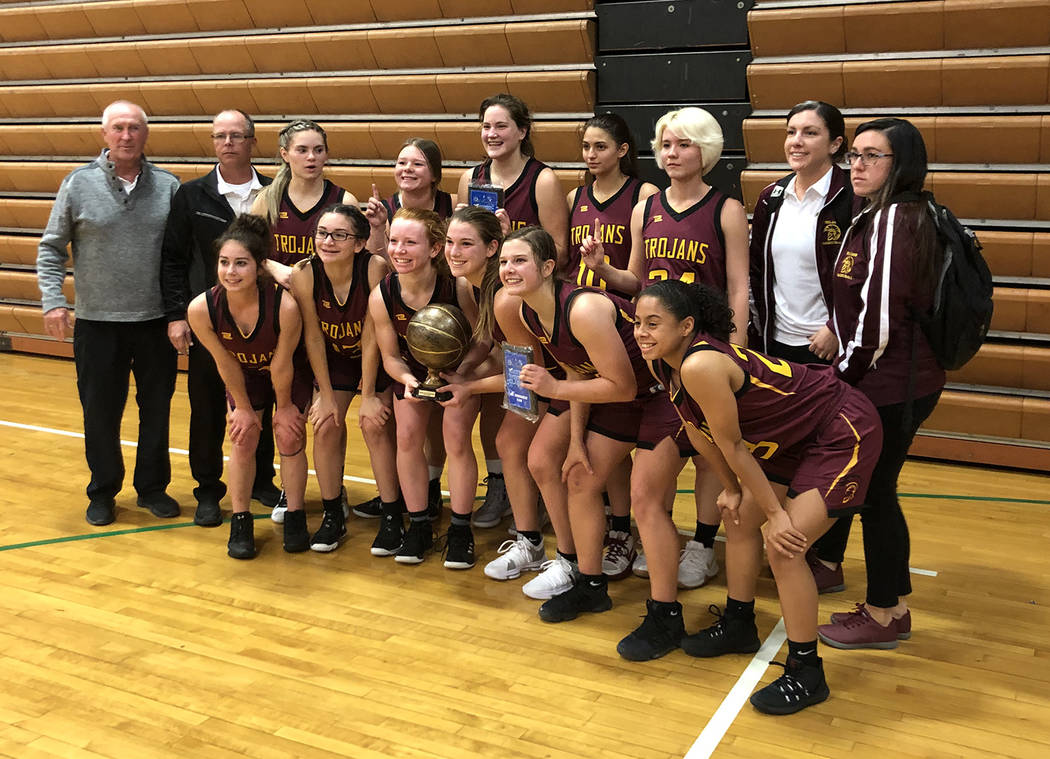 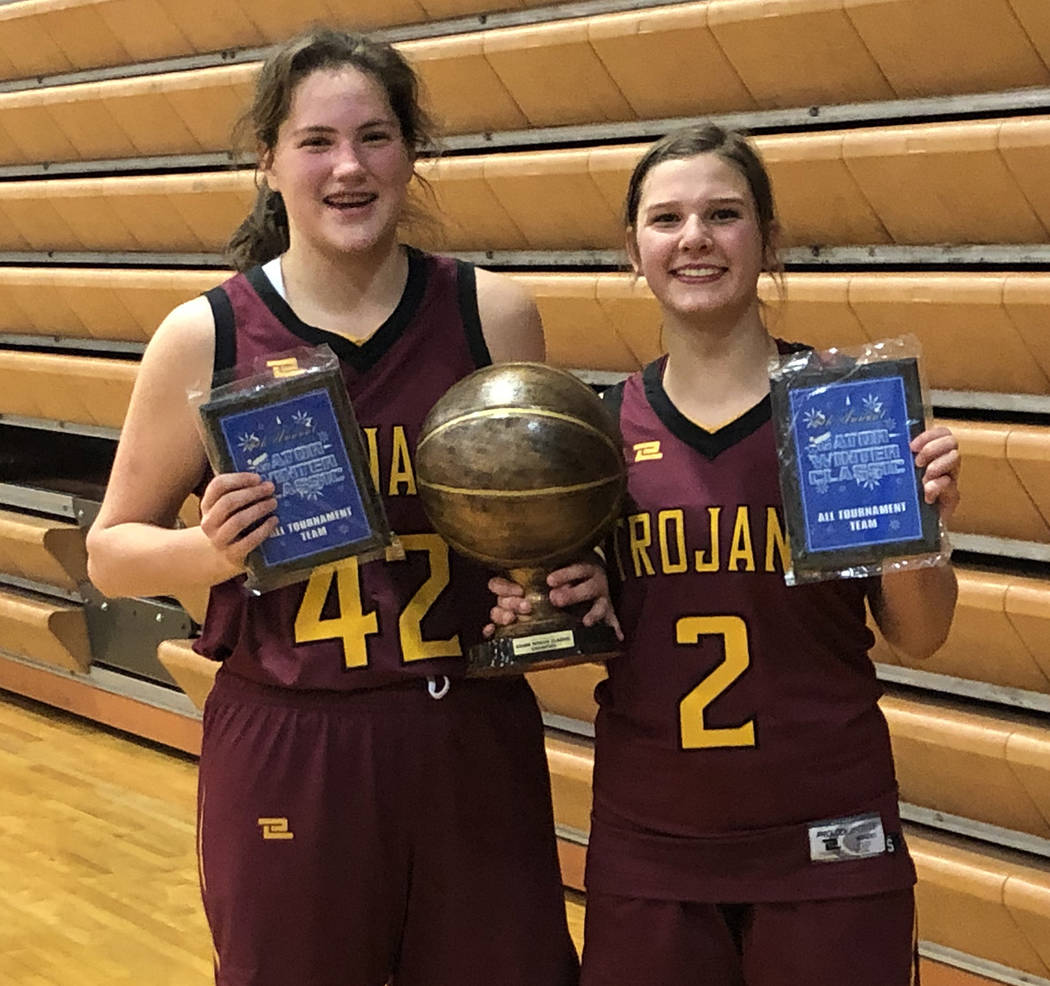 The Gator Winter Classic provided a step up in competition for the Pahrump Valley High School girls basketball team, and the Trojans stepped up to meet it.

The Trojans went on 15-0 and 11-0 runs during the second half Monday to turn a 19-18 halftime lead into a 45-29 win over Sierra Vista in the championship game of the Silver Bracket at Green Valley High School.

The Trojans won four straight games after dropping their opener in the tournament, which featured 24 teams from Nevada, Alaska, Arizona and California. And the Silver Bracket final was typical of how things went during the four-game winning streak, with Pahrump Valley trailing 14-10 after the first quarter.

“We come out super-bad sometimes, like really bad, and we did that again,” sophomore guard Tayla Wombaker said.

And coach Bob Hopkins pointed that out to his players between quarters.

“The first quarter we gave up 14 points, and that’s not us,” Hopkins said. “That’s what I told the girls.”

They pulled ahead by a point at the half at 19-18, but they still weren’t in any kind of rhythm.

“At halftime I said, well we haven’t played worth a hoot and we’re up one, so let’s turn up the intensity, and we did,” Hopkins said.

“We weren’t feeding it to the post like we should have because of the size difference,” Wombaker said. “At halftime he kind of chewed us, which sometimes helps us.”

But the number that jumped off the stat sheet at halftime wasn’t the score, it was the three fouls that two Sierra Vista players had. And at the 6:16 mark of the third quarter, Mountain Lions junior captain Ajanae Cressey went to the bench with her fourth foul.

That changed everything, and by the time Cressey returned, the Trojans held a 12-point lead.

“She was a really good rebounder,” said Trojans junior Kate Daffer, who collected 40 rebounds during the tournament. “She was rebounding everything and she could block our shots, and then when she went out that helped.”

The Trojans are not a great shooting team, and holding them to one shot is critical to beating them. Without Cressey, the Mountain Lions couldn’t keep the Trojans off of the offensive boards, and the multiple chances helped Pahrump Valley reel off 15 consecutive points between the time Cressey left the floor and the next Sierra Vista basket, which came with 11 seconds left in the quarter.

Of the Trojans’ 40 rebounds against the Mountain Lions, 20 came on the offensive end.

“I think after halftime we just stepped up our game and really hustled on defense, and then we ran down the court and went as fast as we could and that really helped us a lot,” said Daffer, who finished with 12 points, 9 rebounds and 4 steals.

“We just came out and said we know we can beat this team, and that’s what we did,” added Wombaker, who contributed 11 points, 4 assists and 4 steals.

Maddy Souza capped a strong tournament with what was probably her best all-around effort of the season: 12 points, 10 rebounds, 7 assists and 5 steals.

The pattern Wombaker alluded to of starting slowly manifested itself throughout the tournament. On Friday against Silverado, the Trojans were tied 10-10 after one quarter but led 46-28 after three. Wombaker exploded in that game, connecting on 5 of 10 3-pointers and scoring 26 points to go along with 7 assists and 5 rebounds, while Daffer totaled 11 points and 13 rebounds in a 58-36 Trojan rout.

Against Durango on Saturday, the Trojans led 13-10 after 8 minutes but took a 47-19 lead into the fourth quarter.

Wombaker tallied 15 points and 6 steals in that one, with Souza netting 14 points, Daffer chipping in 10, Nicky Velazquez grabbing 5 rebounds and Maddie Hansen posting 5 assists in a 51-38 win over the Trailblazers.

“We beat some teams that are going to push us,” Hopkins said. “It’s good to have those kinds of games where we have to turn it up.”

“It was really nice to have good competition,” she said.

“Maddy Souza played a great tournament, played great defense, made some nice moves,” Hopkins said. “Makayla Gent doesn’t score, but she shuts down scorers, and that’s as good as scoring. Nicky Velazquez played a good tournament for us.”

The Trojans get to enjoy some time off before heading back into Sunset League play, where they have opened 2-0. Next up will be Del Sol on Jan. 9 in Las Vegas.