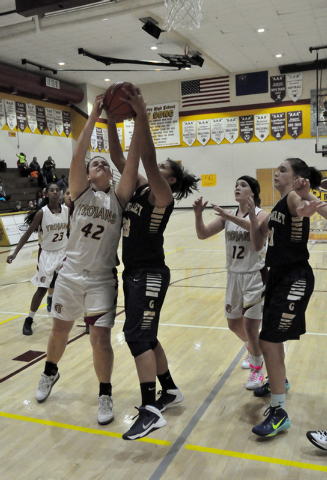 This week the Lady Trojans will have faced two of the top teams in the Sunset League, Spring Valley and Faith Lutheran. Spring Valley came to town on Wednesday and their defense was too much for the Trojans (2-12 overall, 0-7 Sunset League), who lost 56-38.

Trojans Coach Jennifer Hagstrom said her defense did well the first half, but it was all Spring Valley (17-1, 7-0) in the second.

“In the second half our offense dribbled into a lot of traps and they get credit for being good at setting those traps,” Hagstrom said.

The Trojans kept the game close in the first half. The score was 11-9 at the end of the first and at the half the score was 27-19.

The Trojans had one of their best first halves against Spring Valley. The Trojans defense also managed to keep one of the top Grizzly scorers from getting above their game averages. Kayla Harris scored only 14 points and she usually scores 20 per game.

It was in the third quarter that Pahrump fell apart.

“We made some poor decisions in the third quarter and you have to give their defense credit for being really aggressive and coming after the ball,” the coach said.

Despite the loss, Hagstrom believes there were some positives in the game.

“The whole team played hard,” she said. “We had the smallest spread of any team that has played them and we scored the most points against them.”

Alyssa Murphy never gave up and hustled the whole game and led the team in scoring with 19 points.

The coach also thinks her team learned that they can play against the top teams. After all, Spring Valley beat Clark by 52 points.

“We can play with these teams, but we need to play more from the heart. We have the ability. We made a lot of improvements,” Hagstrom said.

“For Faith, we need to do a better job of swinging the ball against Faith and getting the ball to our wing. And we’ve got to stop freaking out when the trap comes,” the coach said.

The Trojans boys team was looking for its first league game against Spring Valley on Wednesday night but it wasn’t to be. The boys lost 72-34.

Trojans Coach John Toomer knew his team was going to have a tough game because prior to the game he said two players were sick, one of them being Danny Foss, who is a leading scorer for the team. Foss played sparingly in the first half. With two players out, this left only one healthy sub for the team.

In the second half, this physical strain severely hampered the team. The offense slowed and the team only scored 10 points in the third and only five points in the fourth.

The Trojans’ leading scorer for the game was Uriel Ramberg-Wiley, who had 13 points. He was aided by Parker Hart who had 9 points with two of them being 3-point shots.

Toomer said his team will prepare hard for the number one team in the Sunset League, Faith Lutheran, which is today.