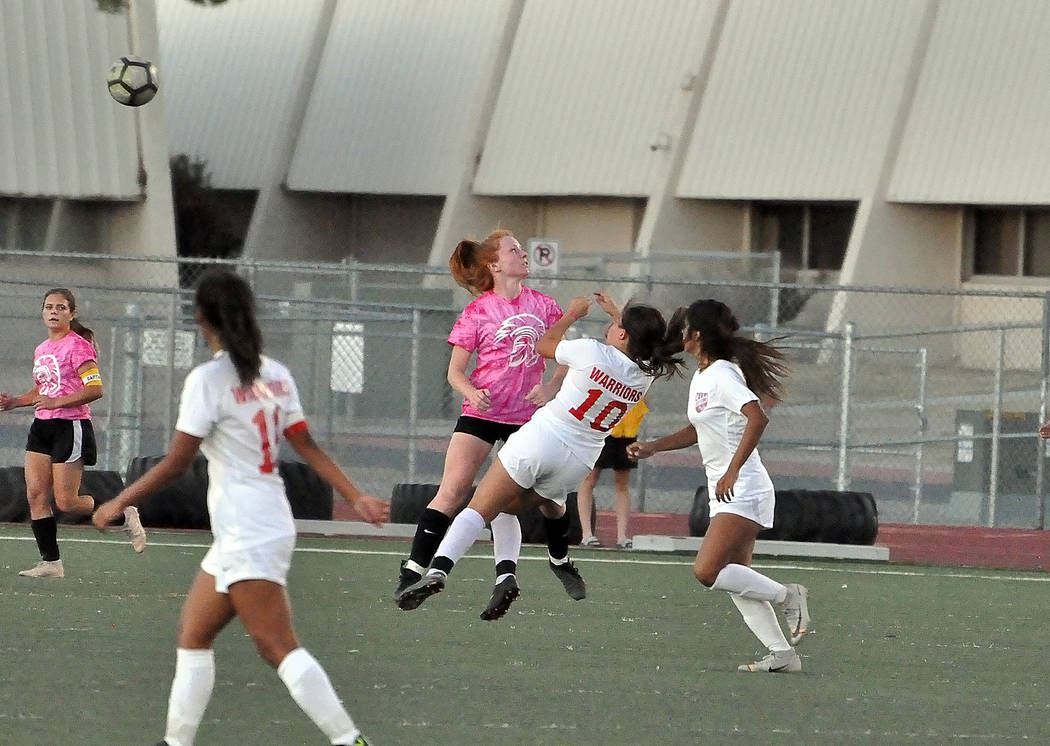 Horace Langford Jr./Pahrump Valley Times Pahrump Valley junior Makayla Gent collides with Western junior Angelica Sanchez during Monday's Sunset League game at Trojan Field. Sanchez stayed down for a few minutes after the collision, while Gent tallied a goal and an assist during the Trojans' 5-1 win.

A year ago, the Trojans shared the Sunset League title with Western, but after splitting two regular-season meetings with the Warriors, the tiebreaker left the Trojans as the No. 2 seed. It worked out, as the Trojans defeated the Warriors 1-0 in the region final, and both teams went to the state tournament.

But the Sunset League championship was what the Trojans wanted this time around, and Monday night they made quick work of it. Freshman Adryanna Avena-Caraballo scored goals on her first three shots and the Trojans more or less cruised from there, rolling to a 5-1 win over Western at Trojan Field.

The win keeps the Trojans perfect in the league (8-0) and 14-2-3 overall with two games to go. With Western at 12-5-1 and 6-2, the Warriors could only tie the Trojans, who, of course, would own the head-to-head tiebreaker after defeating the Warriors twice this season.

Three goals on three shots before some fans were in their seats is not a normal occurrence, but Avena-Caraballo explained it in a straightforward manner.

“It was just going down, crosses and me just barreling through,” she said. Junior Makayla Gent assisted on two of Avena-Caraballo’s goals, while junior Kaylee Mendoza assisted on the other. Gent and Mendoza each scored a goal as the Trojans took a 5-0 lead before Western got on the board with roughly 15 minutes to play.

The game played out far differently than the teams’ first meeting, in which Pahrump Valley scored twice and held on for a 2-1 win in Las Vegas.

“I think we definitely played a lot harder than the last time we played,” freshman keeper Madison Lee said.

Lee doesn’t get much credit for the Trojans’ success because the team’s defense does an excellent job at preventing quality chances. Lee is well aware of that.

“They actually do a really good job of keeping the defense in order and keeping them covered and making sure the ball does not go in my box,” said Lee who has recorded eight shutouts this season.

Seeing Avena-Caraballo find the net three times was a good sign for Pahrump Valley, as she had missed time with a knee injury.

“It was tough watching,” she admitted. “I’m a little sore, but I did get pushed around a lot. But my knee feels great, and I’m ready to play another game.”

She won’t have long to wait to play another game, as the Trojans will travel to Las Vegas to play Equipo Academy at 3 p.m. today. They will wrap up the regular season at home Tuesday against Del Sol, then open Class 3A Southern Region Tournament play against the No. 4 seed out of the Sunrise League at 4 p.m. Nov. 4 at the Bettye Wilson Soccer Complex in Las Vegas.