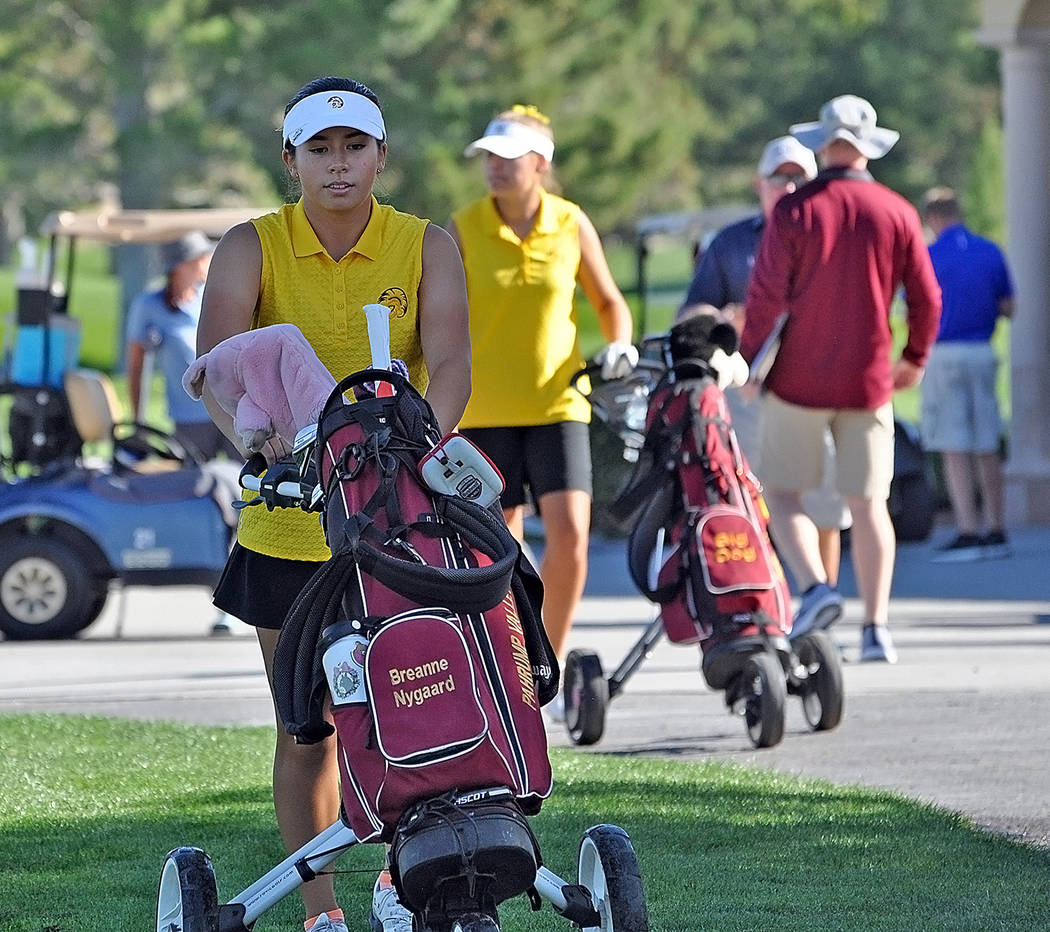 Horace Langford Jr./Pahrump Valley Times Pahrump Valley junior Breanne Nygaard heads to the 1st tee of the Class 3A Southern Region Tournament on Oct. 16 at Mountain Falls Golf Club in Pahrump. Nygaard captured the region championship with a two-day total of 151, and the Trojans won the team title by 20 strokes over Boulder City. 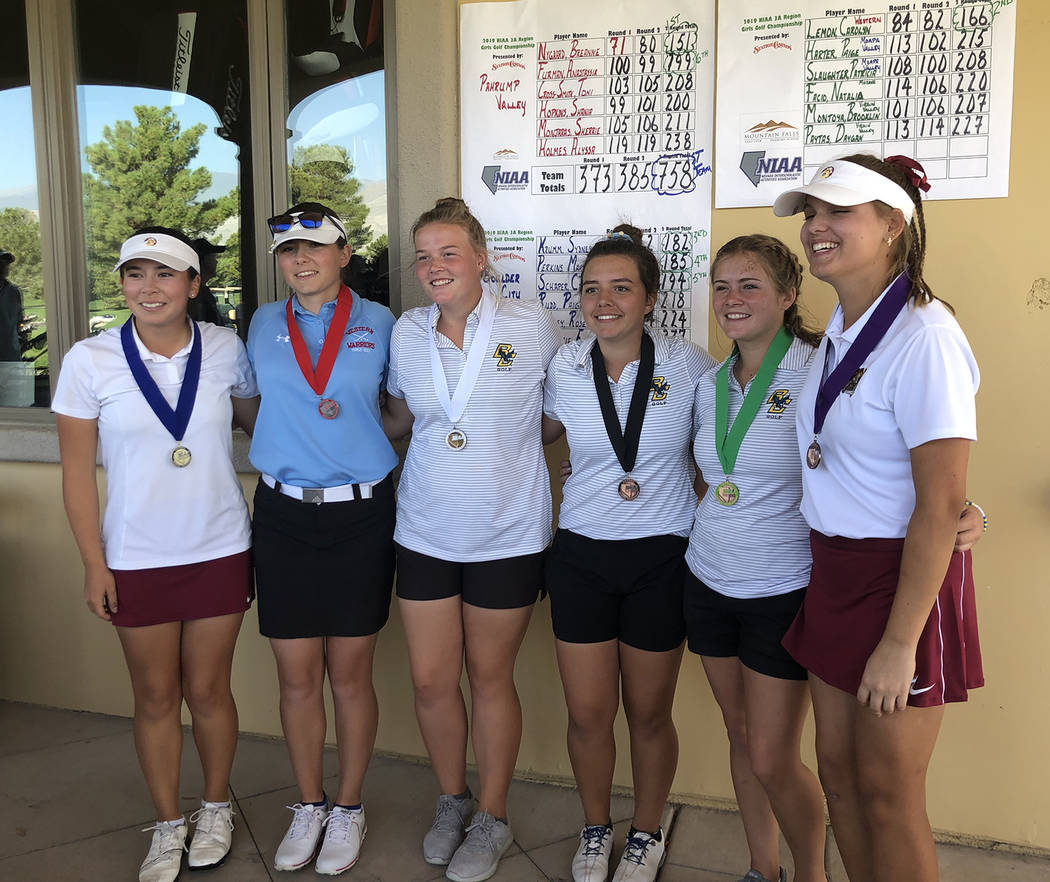 Beating Boulder City in the region tournament and advancing to the state tournament is an annual goal for the Pahrump Valley High School girls golf team. This year, Breanne Nygaard decided to make a little history in the process.

Nygaard shot rounds of 71 and 80 to beat out rival Carolyn Lemon of Western by 15 strokes, capturing the individual title while leading the Trojans to the team championship at the Class 3A Southern Region Tournament on Thursday at the par-72 course at Mountain Falls Golf Club.

It was that first-round 71 that had people talking, as it is believed to be the first time a Pahrump Valley girl has posted a round under par at the region championships. Nygaard birdied Nos. 3, 4, 10 and 16 during her the round.

“As far as I know, and I’ve been around a long time,” Pahrump Valley coach Bob Hopkins said. “I don’t remember anybody ever shooting under par.”

For Nygaard, the tournament title was a natural progression after the past two region tournaments, as she finished third at Las Vegas Golf Club as a freshman and second at the Palms and Casablanca in Mesquite as a sophomore. But she said she wasn’t truly focused on the region tournament.

“This was a goal, but in the back of my mind,” Nygaard said. “It wasn’t my main goal. I was really looking forward to state, but being here now I thought about how much I really want to grind and do well here, especially since it’s our home course.”

Playing at Mountain Falls certainly is an advantage for the Trojans, but it’s no guarantee of anything.

“It feels good,” Nygaard said. “It’s kind of like a basketball game when you’re guarding your home court. You play here, you know how the course is, you know what you’re doing, and overall we came out on top.”

The Trojans did that despite very windy conditions, a major reason Nygaard’s score increased by 9 strokes from the first to the second round. Even so, her 80 was the best score of the day Thursday.

“The wind was crazy,” said Nygaard, who credited her irons for her strong rounds. “I feel like I had to think a lot longer to process, more club, less club, but overall it wasn’t too bad.”

“It was horrendous on the back nine,” argued teammate Anastassia Furman, who snagged a medal with her sixth-place finish after rounds of 100 and 99 were enough to nose out teammate Shania Hopkins by one stroke. “But I think we managed.”

Indeed they did. Pahrump Valley defended the region championship in fine style, as last year’s 3-stroke margin over Boulder City ballooned to 20 strokes over the Eagles this year.

“We had some kids step up,” Hopkins said. “Breanne played like we knew she was capable of, and (Wednesday) we had Shania, Sherrie (Monjaras) and Toni (Cross-Smith) shoot their best rounds of the year, and they backed them up today. And then Anastassia played her best nine of the year on the front for us.”

“I feel like I did really good,” Furman said. “We had a bit of a home-course advantage, maybe. But I’m proud of us. We’ve grown a lot since the beginning of the season.”

Nygaard’s 151 matches Lemon’s winning score — just 2 shots better than Nygaard — from last year in Mesquite, and she certainly did not think she would finish so far ahead of her biggest rival.

“I’m really surprised,” she admitted. “I was coming in here thinking I was going to have to win with an insane number, and I definitely didn’t think I was going to win by how much I did.”

Pahrump Valley and Boulder City, along with the top five individuals who don’t play for the Trojans and Eagles, qualified for the Class 3A State Tournament held Monday at Boulder City Golf Course and Tuesday at Boulder Creek Golf Club.