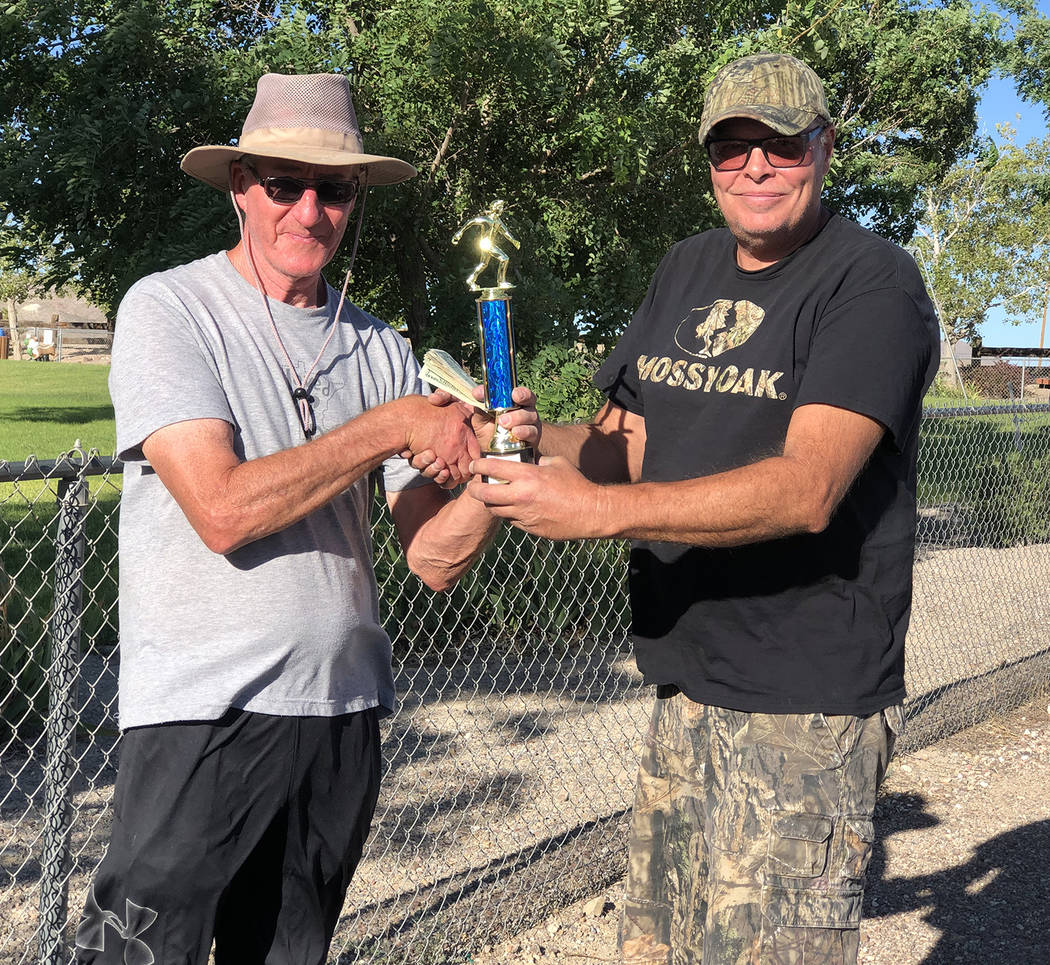 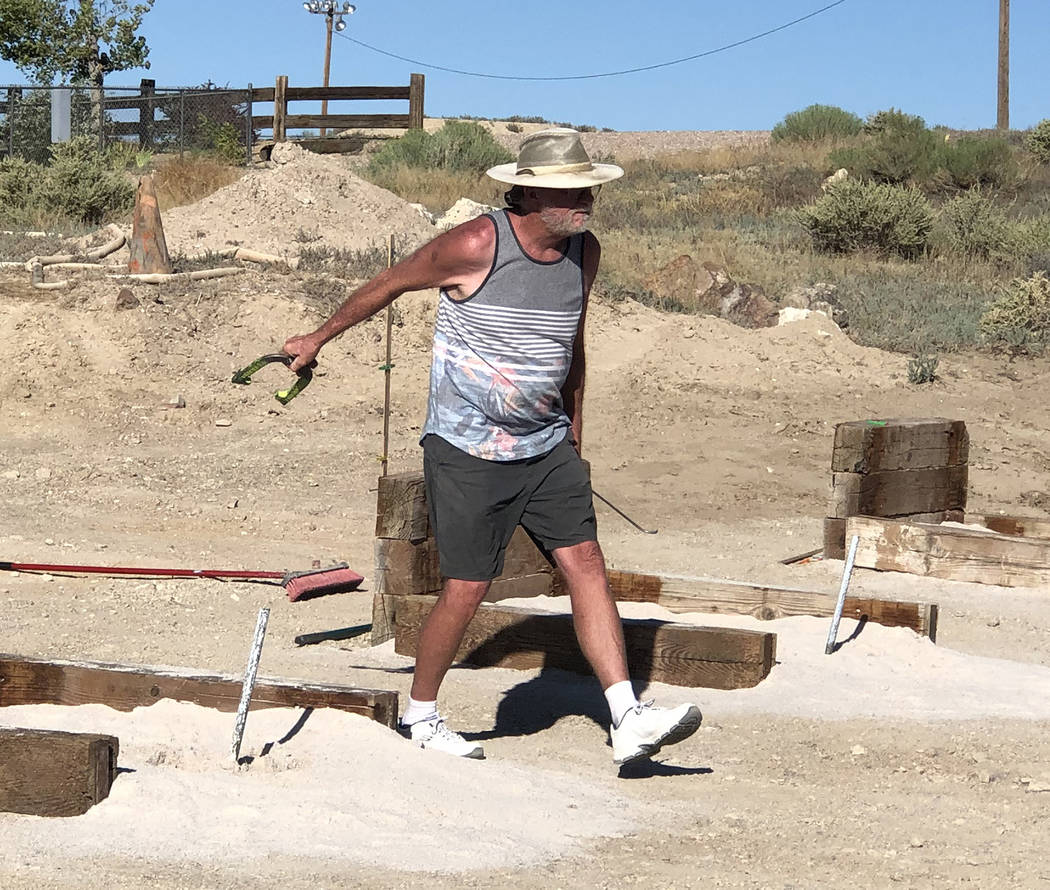 Tom Rysinski/Times-Bonanza & Goldfield News Don Brown of Pahrump pitches during the doubles final of the Goldfield Days Horseshoes Tournament on Saturday in Goldfield. Brown and Mark Kaczmarek defeated Dennis Andersen and Dave Barefield to win the doubles title and share the $159 first prize.

It was a very busy weekend for Lathan Dilger.

First, Dilger went undefeated to win the B Division of the Shade Tree Open horseshoes tournament Saturday at Petrack Park in Pahrump.

Sunday found him in Goldfield as the organizer of the first Goldfield Days Horseshoes Tournament, and while he didn’t enjoy the success he had the day before, the new event went well and could well become a permanent part of the town’s annual party.

Lance Hahaj was declared tournament champion at the Shade Tree Open on the basis of most ringers, breaking a three-way tie for first in the A Division with Ken Jose and Dok Hembree.

“We would have had a playoff, but with three tied it’s very hard, and it was hot,” said Mike Norton, NHPA secretary-treasurer and the organizer of tournaments held in Pahrump.

Dilger’s format differed from the sanctioned tournaments in that the two divisions played double round-robins and the winner of each played for the overall championship. The two second-place finishers likewise played off for third place.

The prize pools were larger than usual because of contributions from Just Jeri Photography, Goldfield Stop Inn and the Esmeralda County economic development authority. Dinky Diner contributed money for the trophies, which were awarded to the top three competitors in singles and doubles.

Dan Dunn of Las Vegas was the biggest beneficiary of those contributions and the different format. Dunn went 6-2 to tie for first in B Division, defeated Dave Barefield in a playoff to claim the title, then defeated A Division champion Dennis Andersen to take the tournament title.

Dunn took home $174 for winning the singles tournament, a much larger haul than most sanctioned tournaments.

“This is a new place, just getting started,” Dunn said. “It was set up really good. A lot of the normal players are here. We need more of the local people to come out. It was a good time, a lot of fun, a lot of games.”

About the only issues the inaugural event faced were the format creating a very long day of pitching and a lack of local entrants, as the 10 pitchers who committed to participating earlier in the week were the only 10 who came out and competed.

But both of those issues should be resolved next year, as Dilger envisions a different schedule for 2020.

“Next year we’re going to go on Saturday and Sunday,” he said. “Maybe we’ll have the doubles on Saturday because a lot of people who don’t play much horseshoes will play doubles but might not want to get into the singles. The reason we didn’t do it this year was because we had the tournament yesterday.”

With only four pits, the tournament took a long time to play, and some of the older players were visibly wearing down toward the end. About eight hours after they started the singles, Kaczmarek and Don Brown defeated Andersen and Barefield to win the doubles, splitting the $159 first prize.

Dilger already is looking forward to next year’s Goldfield Days, and Peggy Carrasco, president of the Goldfield Chamber of Commerce, had no doubts about the tournament returning.

“Absolutely! Are you kidding?” she said. “We want to do things that make people happy, and we know horseshoes tournaments are very popular in a lot of states.”

“On Saturday, we have people coming from all over the United States,” she said.

“Next year we’re coming up on Friday, a bunch of us,” Dilger told Carrasco.

Dilger previously had said he would work on ensuring there are no scheduling conflicts between events such as Goldfield Days and sanctioned tournaments.

The same issue hindered the prospect of adding a horseshoes tournament to this year’s Beatty Days, something Dilger plans to work on for next year.

For now, Dilger is delighted with the inaugural Goldfield Days tournament and the prospects for the future.

“They want us back, and we’re anxious to come back,” he said. “We’re going to bring more people next year, and hopefully we’ll have more prizes and more added money.”

“We pitch almost every Wednesday and Saturday at the Pahrump pits next to the pool,” Norton said. For more information, contact Mike Norton at 805-570-2368.