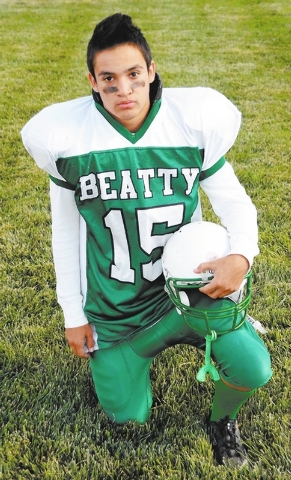 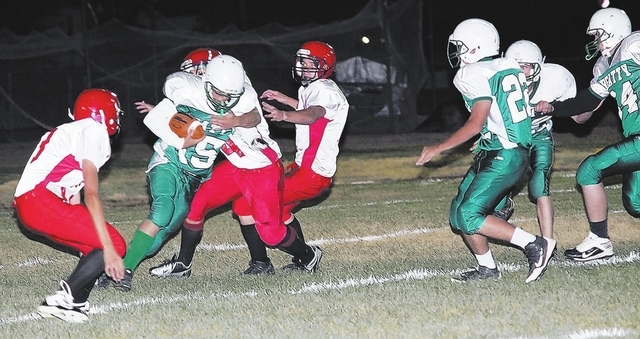 Junior Luis Flores could be the next Beatty Hornet quarterback. He has played with senior quarterback Jake Zamora in three sports. Flores and Zamora have known each other since the second grade. Each knows how the other plays the game. Flores said the two compete against each other and make themselves even better, so when Zamora was out with a bad ankle against Pahranagat Valley, Flores had no problem stepping in for him.

“I usually play running back. At running back I usually go, go, go and with quarterback you have to be patient to let everything come up before you. I could have done better against the Panthers but it was a good learning experience,” Flores said.

Hornets Coach Leo Verzilli believes Flores would make a good quarterback and said Flores was one of the hardest working kids on the field and he is the leading running back on the team. He had over 100 yards rushing in Friday’s game against Beaver Dam, a game the Hornets won 43-36.

Flores knows Verzilli might have him play quarterback next year, but it would mean the team would give up a good running back. This is something Verzilli would have to decide for next season.

“I might have it next year. I am willing to step up to that role. Whatever position he wants me to play. I just like being on the field playing football because it is a fun game. I like running with the ball and hitting people. I really did not get a lot of snaps, but I get to watch what everyone else did from my position. I usually can help people out with what they need to do on plays. I know where everyone should go, so playing quarterback was not a problem,” he said.

One thing that might keep Flores out of the quarterback position next year would be his arm. Flores said “Zamora has a cannon of an arm,” which is something he does not have. He admits he can only throw 30 yards down the field.

Although Flores is a great lover of the game of football, he loves basketball the best. Basketball, he said, is something he plays much more than football. He enjoys a good pickup game on the weekend.

“Out of all the sports football is the one I practice the least. Sometimes at home I will shoot baskets or play catch with someone, but I don’t have a football so that is the one I don’t practice. I embrace the sport though because it is fun,” Flores explained.

Flores said he liked growing up in Amargosa Valley and really is not in hurry to leave like most kids there.

“I have lived in Amargosa ever since I was little. Some people say it is bad growing up here because it’s all secluded. I kind of like it because I don’t like the noise of a big city. For me, I really cherish the loneliness out here. You really can go out and do whatever you want and nobody bothers you. That’s what I like about it,” Flores said.

The valley is home for many Beatty High students. Each day the students from Amargosa Valley get on a bus and ride 30 minutes to school. The distance is only 27 miles, but it prevents most kids from conditioning in the summer. They just don’t have the rides to attend practice. During the school year there is a bus, but of course during the summer the bus doesn’t run. Beatty High School starts football conditioning and conditioning for other fall sports like volleyball just one week prior to school. Other schools in southern Nevada spend all summer conditioning. This puts the school at a disadvantage, but Flores and his teammates don’t seem to mind.

“The Amargosa situation, it’s difficult because it’s a 30-minute drive and we still come out and put our hearts into it,” he said. “It hurts our conditioning, but does not affect our drive or how we play. We didn’t start playing football until the third week of school so most teams have at least two games on us. The first two weeks are a lot of running. The first game at game speed always messes with us. We are just not in condition.”

Flores will go to college. He has a whole year to decide where. At the moment he is thinking of the military or even a military academy.

He said he might take up accounting or try and get into the automotive industry.

“I love math. I love math because of my middle school math teacher. I love it because there is a certain way to do it. It’s either this way and you get the right answer or another way and get the wrong answer. There is no debating, you either got it right or you did it wrong. That is what I like about it. It is straight-forward and there is no beating around the bush. I was thinking of UNLV and if I tried for the military I would try for a service academy. I need to weigh all my options still,” he concluded.