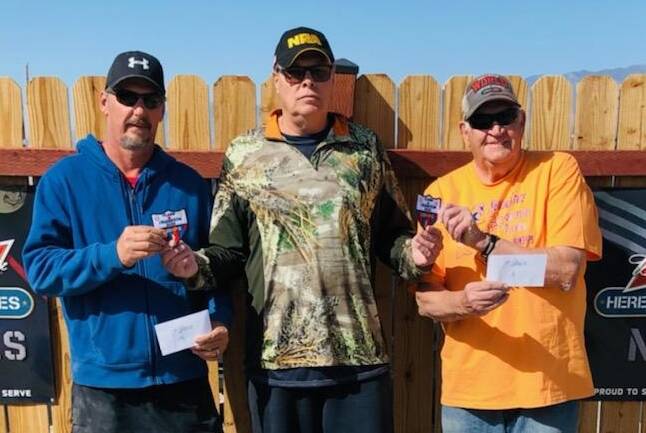 Special to the Pahrump Valley Times Heath Russell (left) and Dennis Anderson (right) receiving their tournament champion patches from Lathan Dilger (center) after winning the Shoes and Brews series event at the VFW on Saturday, March 19, 2022. 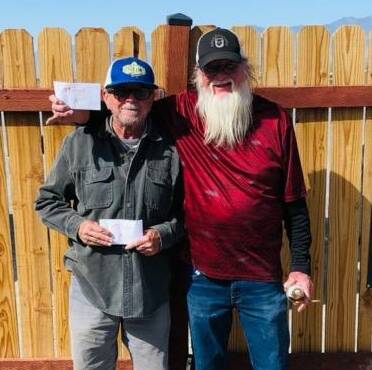 Special to the Pahrump Valley Times The third place finishing team of Chuck Smith (left) and Don Brown (right) with their winnings after the Shoes and Brews series event at the VFW on Saturday, March 19, 2022. 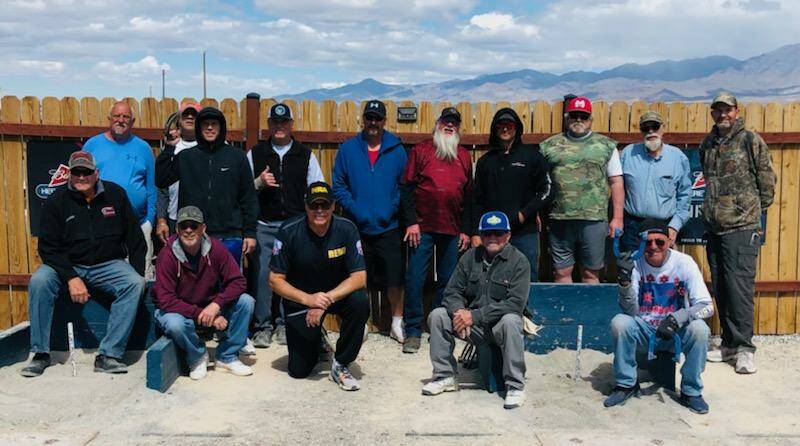 Special to the Pahrump Valley Times A group shot of the participating pitchers in the Shoes and Brews series event at the VFW on Saturday, March 19, 2022. 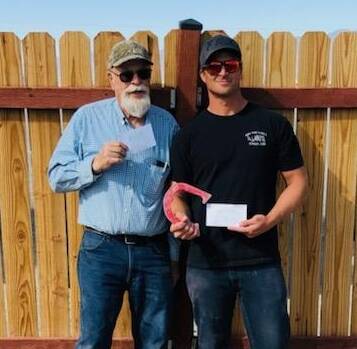 Special to the Pahrump Valley Times The second place team of Lawrence Workman (left) and Jefferson Counts (right) with their winnings after the Shoes and Brews series event at the VFW on Saturday, March 19, 2022.

The Shoes and Brews Horseshoe Pitching Series continued this past weekend with another tournament that took place at VFW Post 10054 in Pahrump on Sunday.

This event had 16 participants, making up eight teams in the double-elimination style tournament. This was the third of the 12 events taking place throughout 2022 for the series.

They finished as the only undefeated team in the tournament.

For their win, each player split 50 percent of the prize money, they each received a tournament champion patch and 10 points added to their season totals.

With their second-place finish, Workman and Counts each split 30 percent of the cash prize pool and they were each awarded five points toward their season totals.

The final prize winners were the third-place team made up of A-player Don Brown from Pahrump and B-player Chuck Smith, also from Pahrump.

Brown and Smith split the remaining 20 percent of the cash pool prize and each receive three points to be added to their season totals.

After three events, the leader of the A-division is Jason Barela from Lemoore, California with 13 points. In the B-division, the leader is Chuck Smith from Pahrump who also has 13 points.

Lathan Dilger, the Nevada State Horseshoe Pitching Association president, thanked everyone for participating. He also thanked Commander Marty Aguiler and his staff at the VFW Post 10054.

The next Shoes and Brews series event will take place at Idle Spur Tavern in Sandy Valley on April 10. All pitchers must be signed in by 10 a.m. to participate.