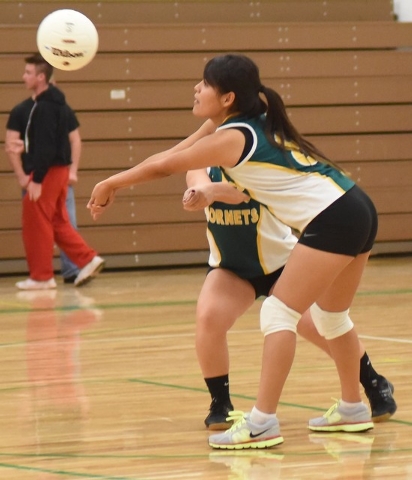 Beatty’s Coach Dale Lerbakken said he liked the way his girls were playing.

“Indian Springs has really improved since last year. Our girls did a lot of good things throughout the games. It was senior night so the senior girls played the whole first game,” Lerbakken said.

“We had great serving from Maggie Cathcart, Denise Gonzalez, Vanessa Gamboa,” he said.

In addition to the serving Lerbakken said the team’s hitting was solid.

“We had great hitting from Claudia Granados, Anel and Vanessa Gamboa, and Denise Gonzalez. I was really pleased with all the girls’ performance because it seems that we are on a roll at the right time,” the coach said.

With the win against Adelson School, the team finds itself within striking range of second place Sandy Valley team.

“Our goal is to win, come out in second place. We are looking forward to all the upcoming games,” Lerbakken said enthusiastically.