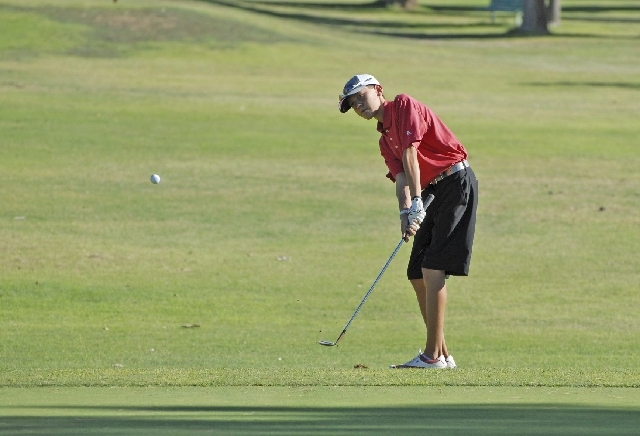 The association played about five tournaments this summer.

In the summer tournaments, girls and boys from ages 7-18 played at Lake View Executive Golf Course.

Junior Golf Director Frank Cox was pleased with the turnout and said the program gets many young kids a good start in the sport.

Nora Nygaard said her daughter Breann played in the 9-12 division. She said it is possible Breann could be the next female prospect for the Trojans.

“We usually go back to North Dakota for the summers,” she said. “This year we stayed around for the junior tournaments. I am used to the heat now, so we might be staying in town for these tournaments in the future. Breann shot a 55 on the front nine and around a 58 in the back nine.”

Cox pointed out another rising star in the program, Austen Ancell, who has been playing for the past five years and has won several times. Ancell is 13 and plays in the 15-18 division.

Cox said Ancell will start playing with the Trojans this year as a freshman.

“Austin will be a star. He was the best middle-school golfer this year and now he will be a freshman this year. He will be playing for the high school team,” said Cox.

Ryan Ancell, his father, said he has been playing beyond his years since he was 10 because of the lack of competition in his own age division.

Ancell started playing golf when his mother took on a job with the golf course. Ryan bought Austen and his older brother, Logan, one set of Walmart clubs to start. They have since gone on to a better set. Logan ended up playing with the Trojans and graduated this year.

“Austen usually wins when he plays his brother,” Ryan said. “Austen gave up other things to play golf while Logan his older brother still played golf and soccer. They both liked it and Austen really liked it. He watches the tournaments on TV and studies and practices. He will come out here in the mornings and practice early in the morning and play a round. During the summer he would play every day. Since he was in sixth grade he has played with high-school-aged kids.”

Austen said he and his brother were not really competitive.

“Sometimes when we go out together he gets upset because there are four years difference, and I am still beating him by 10 or 15 strokes,” he said. “Golf is the kind of sport where you have fun doing it. It’s not a competitive sport. I like it because you meet new people — it’s a friendly sport.”

Austen took the tournament for the 15-18 division. Trojans golf coach Bob Hopkins can’t wait for him to start.

“We will be improved this year. Austen will be a good player and he will help us. All our players will be better this year,” Hopkins said. He added that if the kids want to come out early to practice and need help, he would be there.