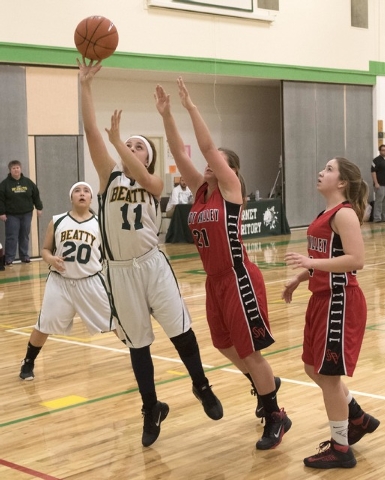 The Lady Hornets are back into their winning ways as last week they traveled to Beaver Dam and won in overtime 44-42. According to Hornets Coach Aimee Senior, Beatty (5-2 overall, 3-2 Division IV Southern) came back from a 12-point deficit in the second half for the win. In the first half, the Diamondbacks (4-3, 2-3) put on a full-court press which gave them a 12-point lead.

“We were both putting on a full-court press and both offenses were scoring against both,” she said. “So we both pulled back on the press. Obviously, we (Beatty) need to work on our press — better trapping and hustling more. Then we quit attacking the basket to give them the lead.”

The Hornets scored 16 points in the fourth quarter.

“We did this by driving to the basket because they were playing a tight man-to-man, and we were getting our rebounds and going back up and making the shot,” Senior said.

The Lady Trojans fell to Clark on Tuesday 45-24. The Trojans (2-14, 0-9 Sunset League) were away. The scoring against the Chargers (6-14, 2-7) was led by Alyssa Murphy and Jill Smith who both had six points. The Trojans got off to a slow start and only scored nine points to Clark’s 19 in the first half. In the second half, Pahrump did a little better and scored 15 points to the Chargers, 26.