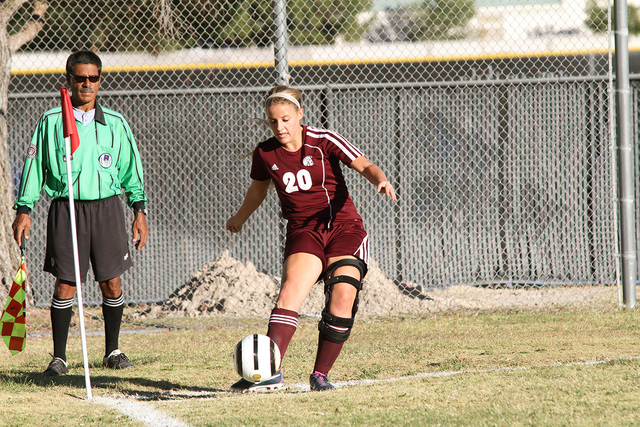 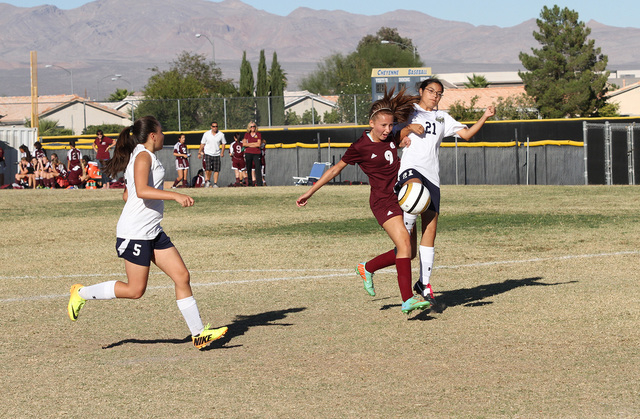 All doubts that the girls had lost their ability to score were out the window last Tuesday as the Lady Trojans traveled to Cheyenne and beat them 6-0. Sydney Dennis led Pahrump (11-6-0, 8-5-0) against the Desert Shields (5-9-1, 4-9-1) with two goals. The Trojans scored three in the first half and three in the second half.

According to Trojans Coach Pam Larmouth, her girls are just peaking now.

“We are excited to take on Faith,” Larmouth said. “We pushed Sydney Dennis up top from attacking midfield to striker and added Ashlyn DiBlasi and Jamie Murphy as alternating attacking midfielders. This seemed to make a big difference in our scoring.”

The coach said the team did have one injured player, Yesenia Garcia. She was hurt in the game and will pose a deficit at the game with Faith.

“We are scrambling to cover her spot,” the coach said.

The Trojans played Faith Lutheran (13-6-4, 10-1-2) on Thursday at home (game was past deadline). The team needed to beat the Crusaders on Thursday and Spring Valley had to beat Clark (10-6-1, 8-5-0) for Pahrump to advance. Faith Lutheran has two ties in their latest two games. They tied Cheyenne last Friday 1-1, and tied Western 1-1 on Tuesday.

According to the Nevada Interscholastic Activities Association, if Clark beats Spring Valley then Pahrump will be in a tie and will have to play to see who goes the playoffs (assuming PVHS beats the Crusaders).