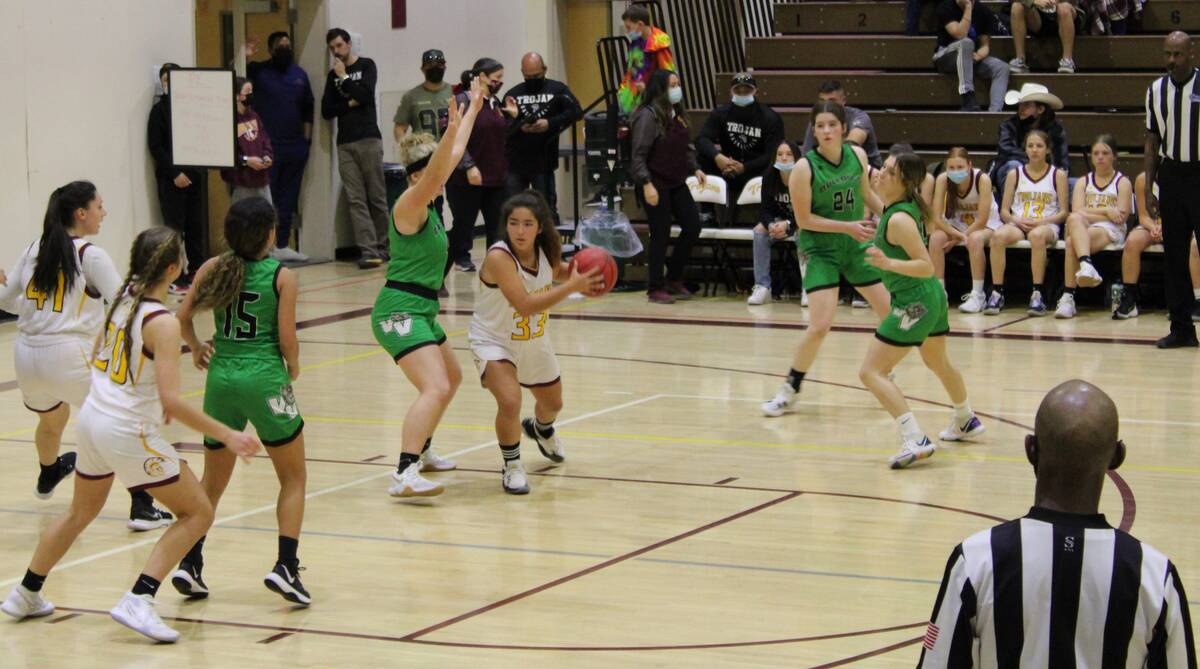 Danny Smyth/Pahrump Valley Times Pahrump Valley guard Paris Coleman (33) looking to pass the ball to a teammate during the Trojans' game against the Virgin Valley Bulldogs on Tuesday, Jan. 11, 2022.

With two more wins over the weekend, the Pahrump Valley girls basketball team improved their overall record to 17-1 and their league record to 3-0.

On Friday night, the Trojans played host to the visiting Bulls of SLAM Academy. This was the first ever meeting between these two schools.

SLAM Academy has only been operating for five years and this is only their fourth basketball season.

The Trojans got out to a 15-0 lead before SLAM scored their first points of the game with a 2-point shot in the second quarter. This is the fourth game of the season that Pahrump Valley was able to hold their opponent scoreless in the first quarter.

Sophomore forward Kailani Martinez led the way for the Trojans in both scoring and rebounding. She finished with a game-high 16 points, making seven of her eight shot attempts, and had a game-high nine rebounds.

Twelve of Martinez’s 16 points came in the first half, helping the Trojans get out to a 22-9 halftime lead.

Senior guard Tayla Wombaker was the only other Trojans player to score in double figures. She finished the game with 12 points to go along with her four rebounds, eight assists and eight steals.

Despite being outscored in the fourth quarter, Pahrump Valley went on to win the game 45-27.

After Friday night’s game, the Trojans had a quick turnaround and had to travel to Eldorado to take on the Sundevils Saturday morning.

Pahrump Valley jumped out to another huge lead in the first quarter thanks to their astounding defense and sophomore guard Paris Coleman scoring all five of her points in the opening frame.

After the first quarter, the Trojans led 18-2 and they were able to increase their lead to 27-5 before the end of the first half.

The offense was led once again by Wombaker and Martinez, who combined for 28 of the team’s 49 points.

Despite scoring just two points, sophomore Avery Moore had herself a very well-rounded game against the Sundevils. She finished with three rebounds, tied for the game-high of five assists and had four steals.

The Trojans went on to defeat Eldorado by a score of 49-15. This was their 11th victory of the season by at least 30 points.

Pahrump Valley’s next game will be on Wednesday, Jan. 26, when they travel to Boulder City to take on the Eagles. Boulder City is coming into the game with an 8-8 record and they have won four of their last five games.

Their only loss during this stretch came against Moapa Valley last Tuesday.

Tipoff is scheduled for 5 p.m.