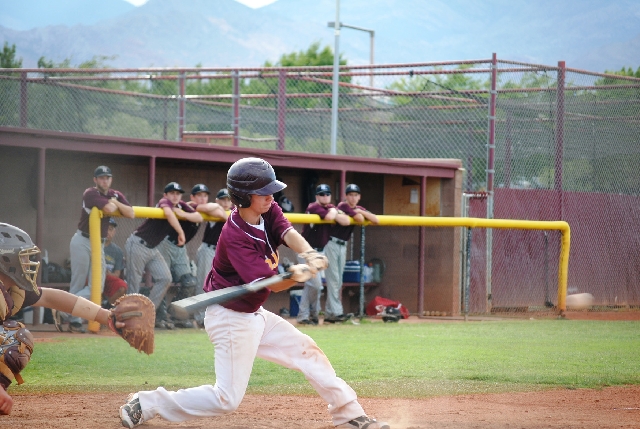 American Legion baseball is underway in Pahrump for the summer. The American Legion program is run by the Nevada Youth Baseball Association out of Las Vegas and provides a summer league so high school ball players can maintain skills during the summer months.

The silver team is 7-2 and in fifth place. Desert Oasis is currently in first place. This team has the older kids, ages 16-19. The squad has 17 players. Four players are college age and won’t be coming back next year to play on the high school team.

The coaches league team has about 20 players on the roster and will have players from 7th grade through 9th grade competing. They are 1-2 after defeating Agassi Prep on Wednesday, 24-21.

“Overall it has been a good experience for our team. Although there is a lot we need to work on, we made some progress, which is what we are looking for at this stage of the game,” Hayes said.

Beitar said this team will be the developmental team and the silver will be the competition team.

“The kids who are playing with Brian are getting a head start. They will know what we are looking for on the varsity high school team. They are getting the basics down on coverages and defenses,” he said.

The legion teams will help the Trojans with their pitching next year, a position where Hayes felt the team was weakest.

Beitar is working with kids like pitcher Johnny Arriola, who made a decision to play another year of high school ball. Arriola was a senior last year at Pathways, but intentionally did not complete his six credits so he could play another year. The coach said he is working closely on Johnny’s mechanics.

“Arriola brings leadership to the team and he is not a cancer,” he said. “He will be working with me on his mechanics and location. We have been working with him all year and he is the kind of kid that is a sponge. He tries to soak up everything. He has made some major strides.”

Pitcher Devin Rily is also working hard in legion too. The coaches believe him to be a good pitcher but want him to work on stamina. He came to the Trojans late in the season and was a pleasant surprise.

“He pitched for me — a complete game,” Beitar said. “He does not have velocity, but he is one of those pitchers who pitches the ball low. He locates the ball well and hits his spots. When you can locate your pitches it does not matter if you throw in the high 70s or high 90s, you will have success.”

Beitar said the big thing this summer is a lot of players are not participating because they are working or they are playing on other teams.

“This is hard because as a coach we can’t make the team better if you have no players,” he said. “I am not giving up on any kid. If they want to play with us this summer or have a future with us or college, I am going to give them an opportunity.”