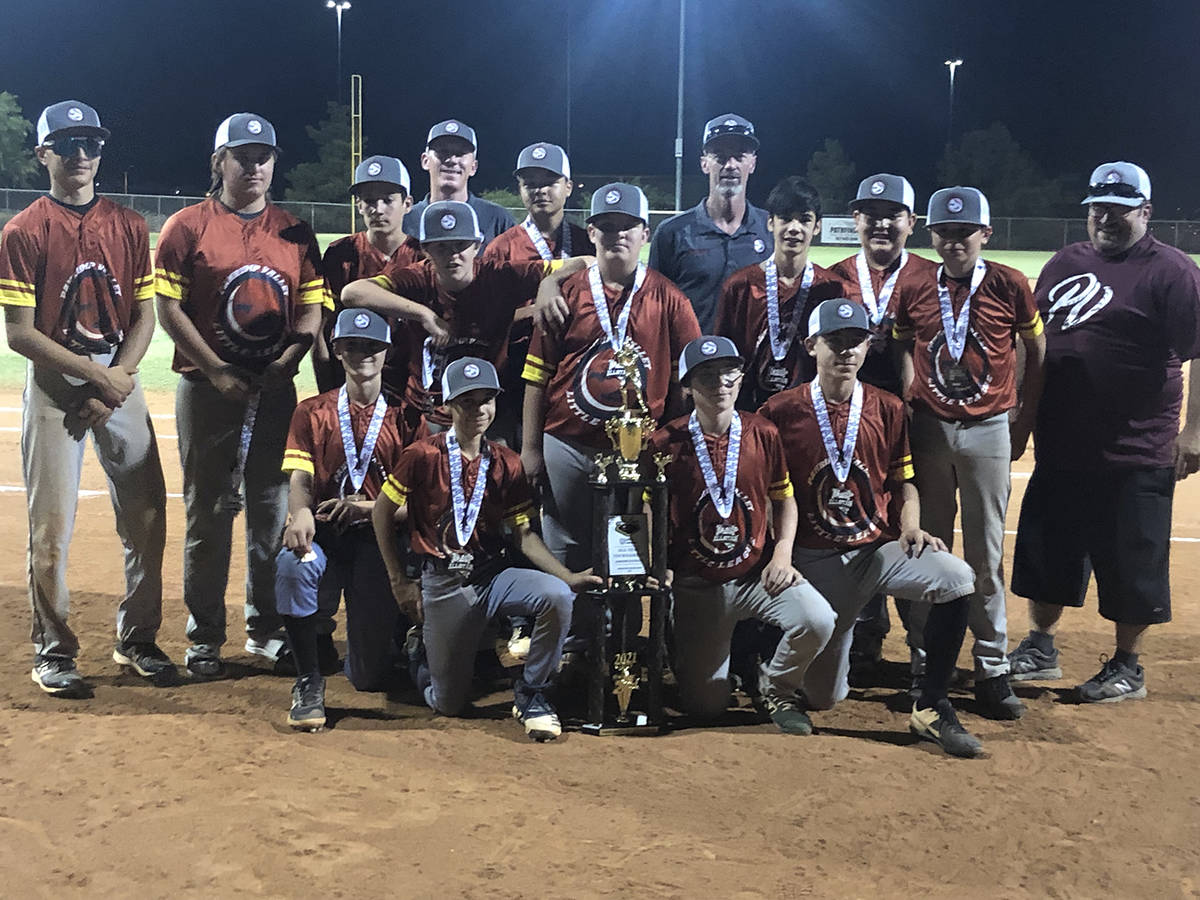 Peccole was the team that handed Pahrump Valley its first loss of the tournament, but that game was a much more competitive game than the 12-2 defeat in the District 4 final at Mountain Ridge Park in Las Vegas.

“I think we came out lackluster, no energy,” Pahrump Valley manager John McHugh said. “It’s been a long week. It just wasn’t our day.”

Peccole starter Connor Day held Pahrump Valley in check until tiring in the sixth inning. Over the first five innings, he allowed a single hit — to Kayne Horibe in the second — and he finished with nine strikeouts.

“We didn’t swing the bats,” McHugh said. “We weren’t as aggressive tonight. We didn’t put the ball in play as much as we like to, looked at too many strike threes.”

“We were just off all the way around compared to how we played the first four games,” McHugh said. “Even the first game against Peccole, we gave much more effort.”

Pahrump Valley had lost its tournament opener 12-9 to Peccole on Monday then proceeded to defeat Summerlin North 18-6 on Tuesday, Western 12-4 on Wednesday and Mountain Ridge 13-12 on Thursday. The game against Mountain Ridge was memorable if not exactly a classic; Pahrump Valley cruised along, leading 10-3 going into the bottom of the sixth, then promptly gave up 9 runs in the inning to fall behind 12-10.

A 3-run rally without a hit in the top of the seventh put Pahrump Valley back in front, and in a game that featured 25 runs, Mountain Ridge could not score against Antonio Whitney in the bottom of the frame and lost 13-12.

Both teams played five games during the tournament, but Pahrump Valley, because they reached the final via the losers bracket, played on five consecutive days while Peccole, which had opened the tournament a day earlier than Pahrump Valley, had Thursday off, its only reward for going undefeated in the “modified” double-elimination format.

Playing five days in a row is tough enough, but it was especially tough after that fiasco on the fourth of those nights.

“I would say so, especially for them at such a young age with all of that energy exhausted during that game,” McHugh said. “Once they came back and we were down two going into that last inning — it’s really hard to give up nine and turn around and make that comeback — but a ton of pride, a ton of no-quit in them, they were scratching and clawing their way back. We tried it again tonight, and I think we finally ran out of gas. We were running on fumes.”

Oddly, Pahrump Valley’s pitching was in good shape despite the busy schedule.

“Due to Logan (Donnelly) and Kier (Sheppard) going so long, we were in position to throw Kayne, and Kayne threw well,” McHugh said. “We were good pitching-wise, it was just one of those days in baseball.”

Peccole took a 3-0 lead after three innings, scoring twice in the first and once in the third. But the fourth inning was a disaster for Pahrump Valley, with a dropped fly ball in the outfield on what would have been the third out of the inning opening the floodgates for a 5-run inning that effectively put away the game.

Meanwhile, after a single and consecutive walks loaded the bases with one out in the second, Day was cruising along. During one stretch that started after the second of those walks, the Peccole starter retired 12 of 14 batters.

A 4-run sixth pushed the Peccole lead to 12-2 and invoked the mercy rule, ending what had been a remarkable week on a disappointing note. But for a team that even some Pahrump baseball people expected little out of — the district tournament often has been a chamber of horrors for Pahrump Valley teams — winning three consecutive games and playing for a title was quite an accomplishment.

And there was plenty of credit to go around.

“The players who definitely put their best foot forward were Caden Briscoe, Kayne Horibe, Vinny Whitney, Antonio Whitney, Tyson Redditt showed up for us, Booey McClard, Keir — I mean all of them, really,” McHugh said. “Even the players who didn’t play a lot were great teammates, they didn’t complain, they cheered on their teammates and did the job when they were put into hit. Dominic Wilson had a huge hit off the bench (Thursday) night.

“Fun week, had a blast. Can’t wait to do it again next year.”