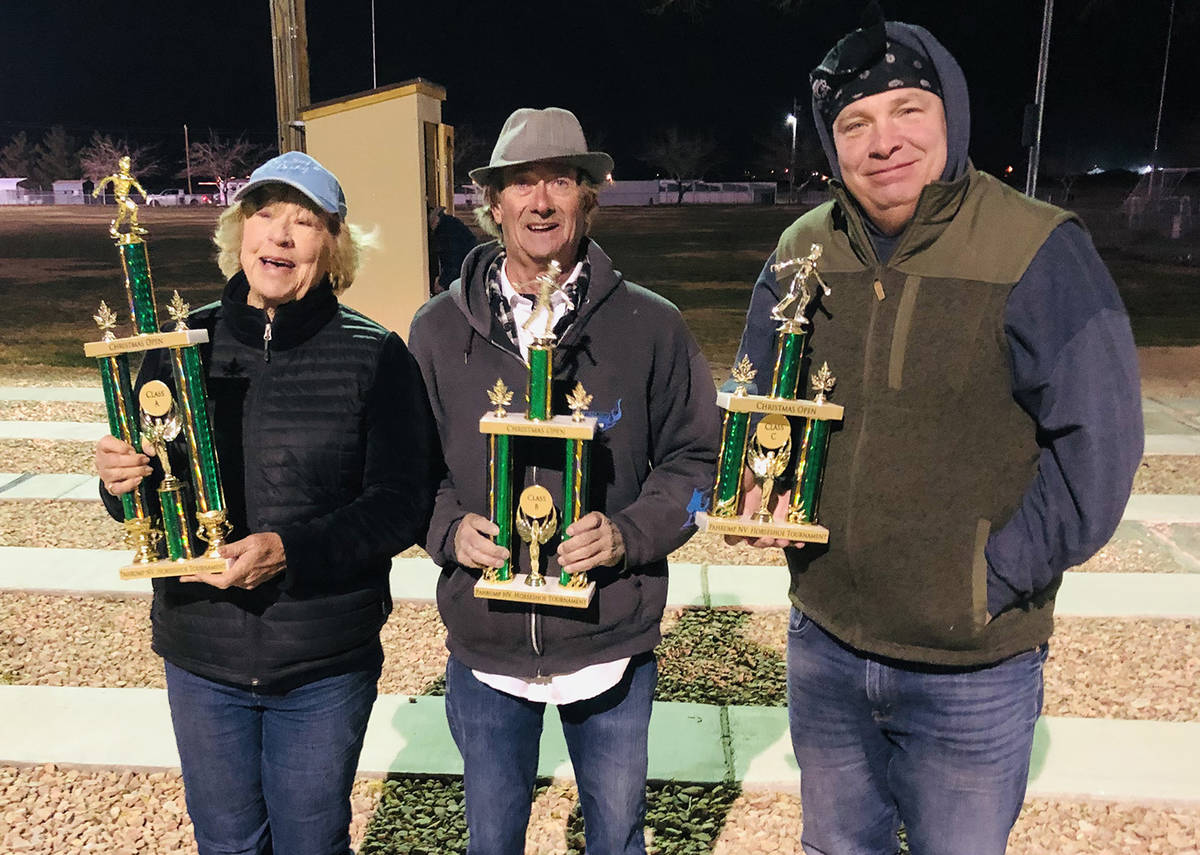 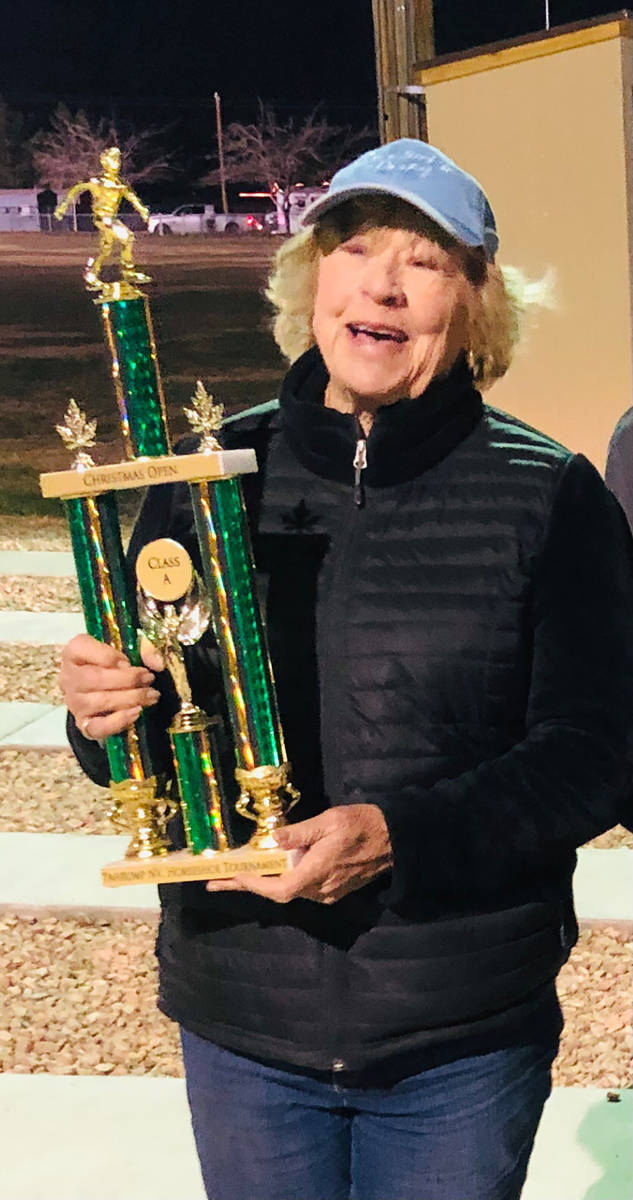 Lathan Dilger/Special to the Pahrump Valley Times Tournament champion Ellie Miller with her trophy after the Christmas Tree Open on Dec. 12 at Petrack Park in Pahrump. 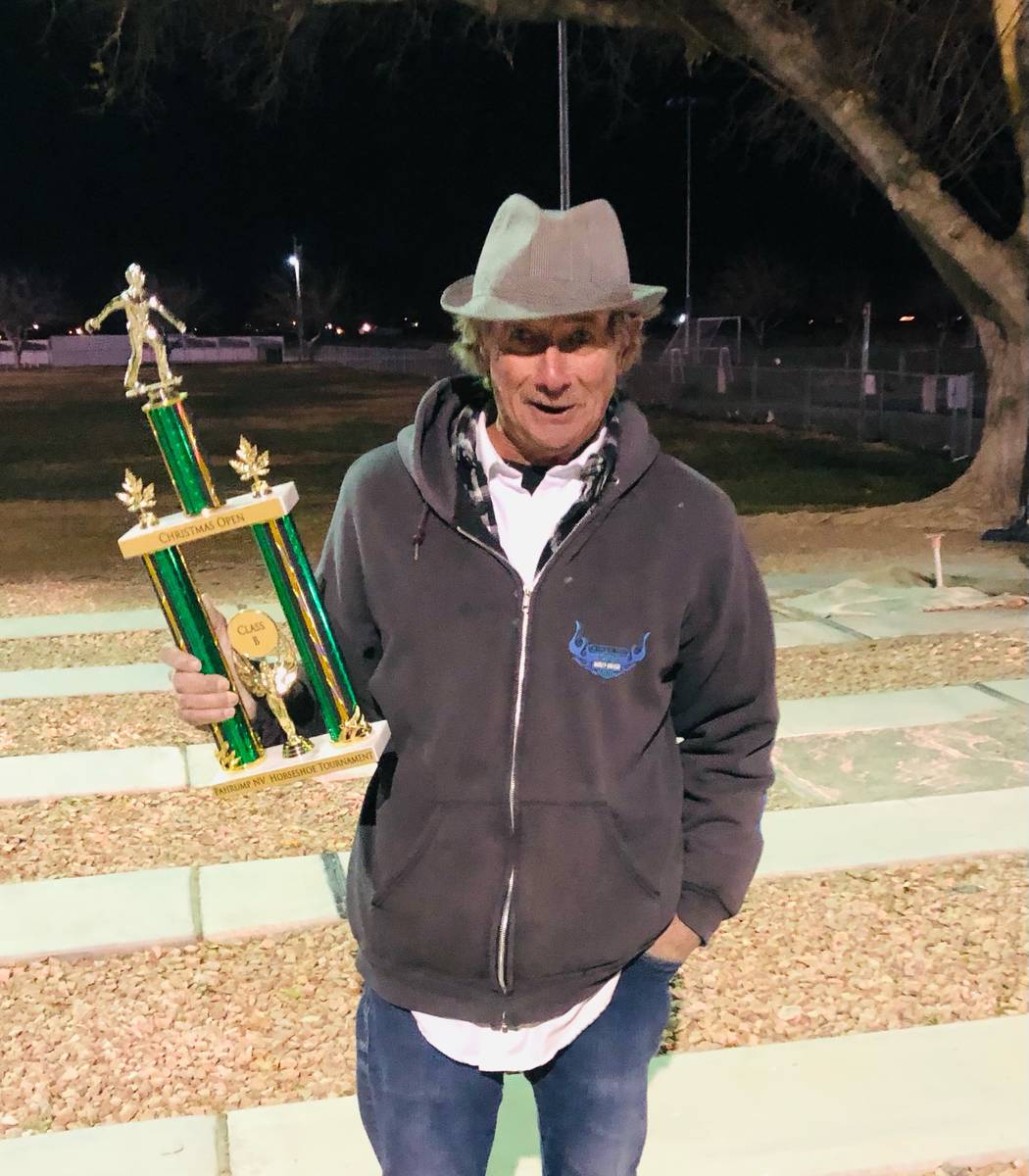 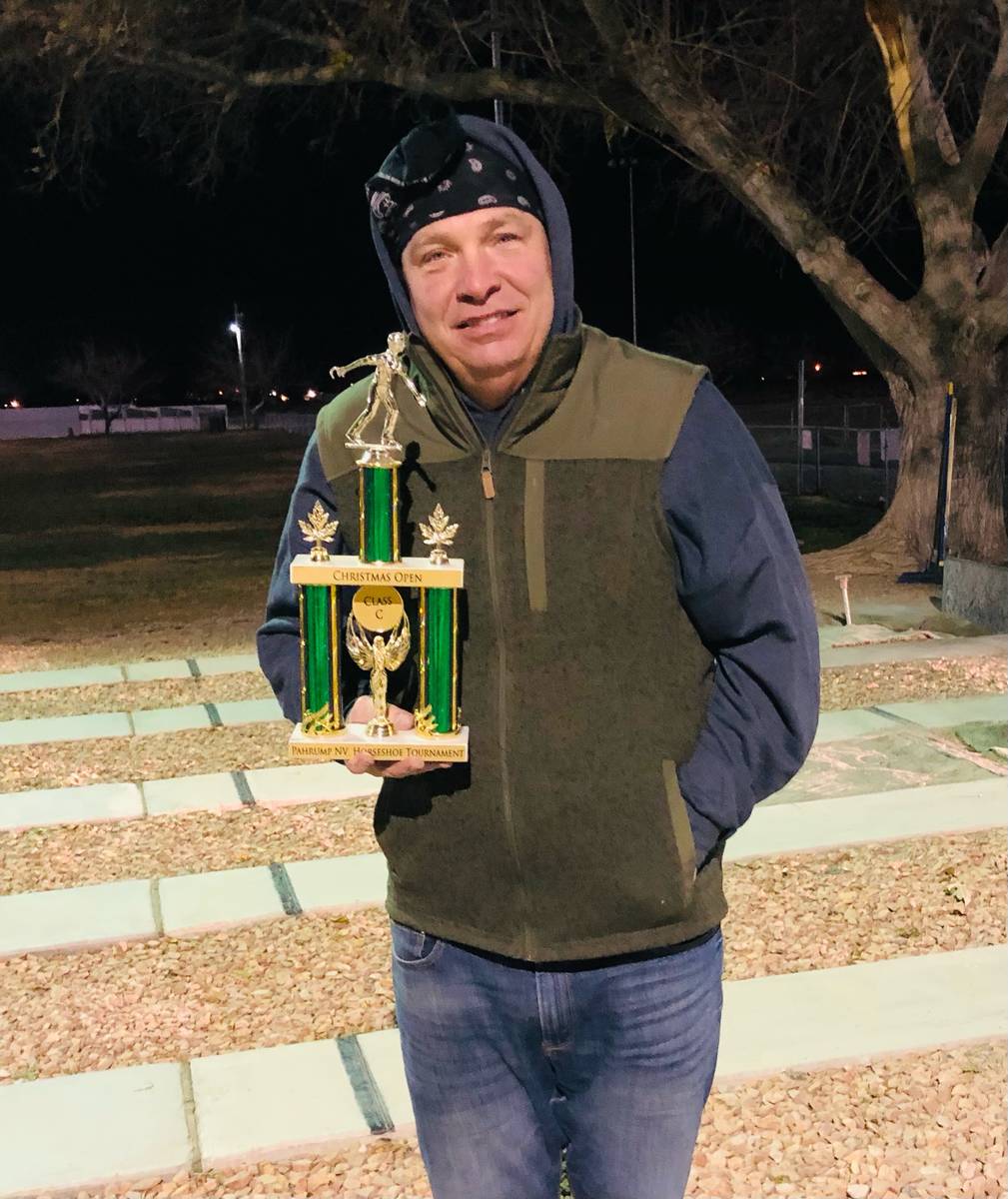 Miller and Lopez each went 6-2 in A Division, nosing out Jim Hatch, who went 5-3. Four pitchers — Lathan Dilger, Bob Miller, Mike Nicosia and Mark Kaczmarek — went 4-4, forcing a four-way playoff for fourth place as the top four places in each division won money.

The need for playoffs — all three divisions featured at least one of them — made the Christmas Tree Open one of the longest events of the year.

“We had a new record of players with 27 — two from Richfield, Utah, two from Kingman, Arizona, five from Mount Charleston, five from Las Vegas and 13 from Pahrump,” said Dilger, the SNHPA president. “Three were females, two were 18 or younger, and we had so many players we outgrew the six courts. It started at 11 a.m. and we weren’t through until 6 p.m. under the lights.”

The cool and windy weather did nothing to hold down turnout, with the pitchers each contributing a $20 entry fee for the round-robin tournament that featured nine pitchers in three divisions. First place in each division paid $100, with $60 for second, $40 for third and $20 for fourth.

In B Division, Randy Salzwimmer and George Mallory tied for first with 7-1 records, while Kasey Dilger and Don Brown tied for third at 5-3. Salzwimmer defeated Mallory in a playoff to take first-place money, and Dilger topped Brown in a playoff to capture third place.

Gary Dilger of Mount Charleston was the only pitcher to win a division outright, going undefeated in C Division to claim first place. Behind him, Chuck Smith defeated Audrey Zuloaga in a playoff after each finished 6-2 for second place, while Russ Jacobs and Vance Dilger tied for fourth place at 4-4 before Jacobs won a playoff.

“I’d like to thank Dennis Andersen for hosting the tournament, also for all of the sponsors: Mom’s Diner, Starbucks, Johnny’s Tacos, Farinata’s Pizza, Michael’s Jewelry and Alien Amusements,” said Dilger, who has made getting more sponsors for tournaments a priority for both SNHPA events and sanctioned Nevada State Horseshoe Pitching Association tournaments.

Horseshoes will take an extended break before the next event in Pahrump, an NSHPA-sanctioned event Saturday, Feb. 20 in conjunction with Pahrump Valley Days. The festival also will feature events sponsored by the SNHPA: singles and doubles cornhole tournaments Friday, Feb. 19 and a doubles horseshoes tournament open to anyone Sunday, Feb. 21.