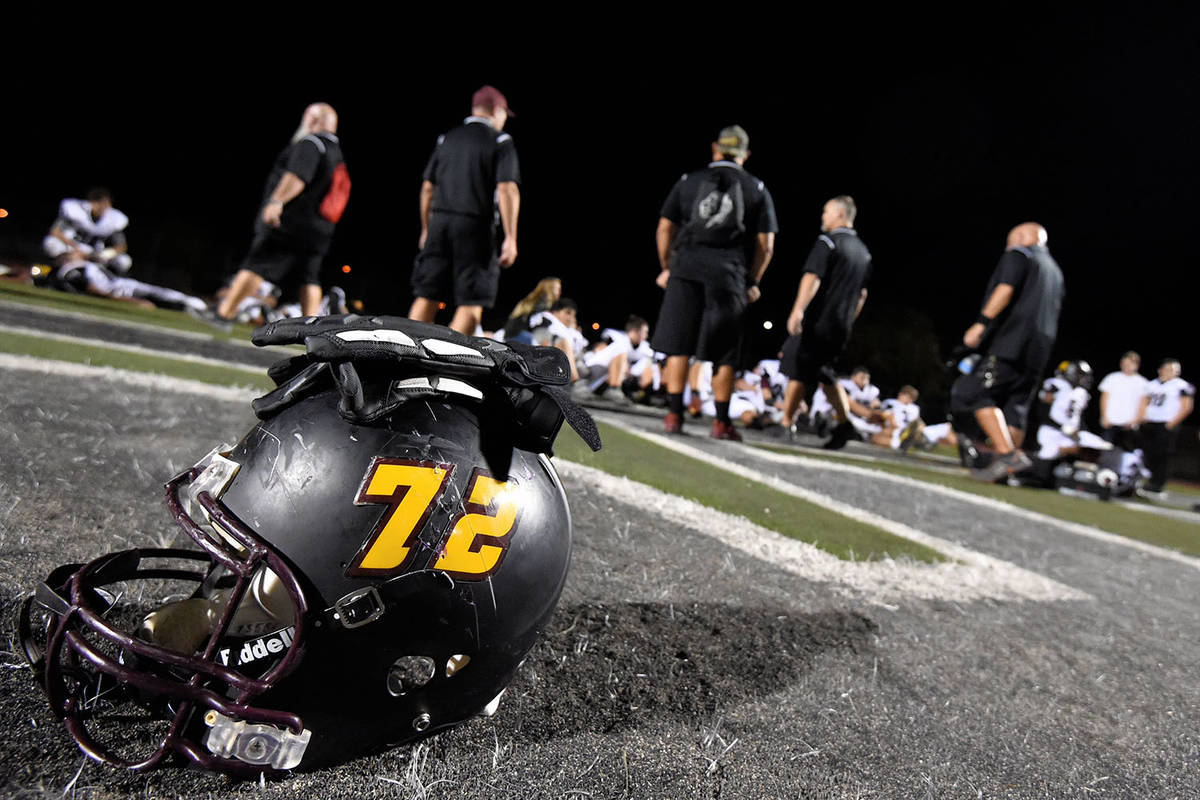 File photo Pahrump Valley High School football players and coaches should find out soon whether there will be a season, which is tentatively scheduled for six weeks beginning March 5. 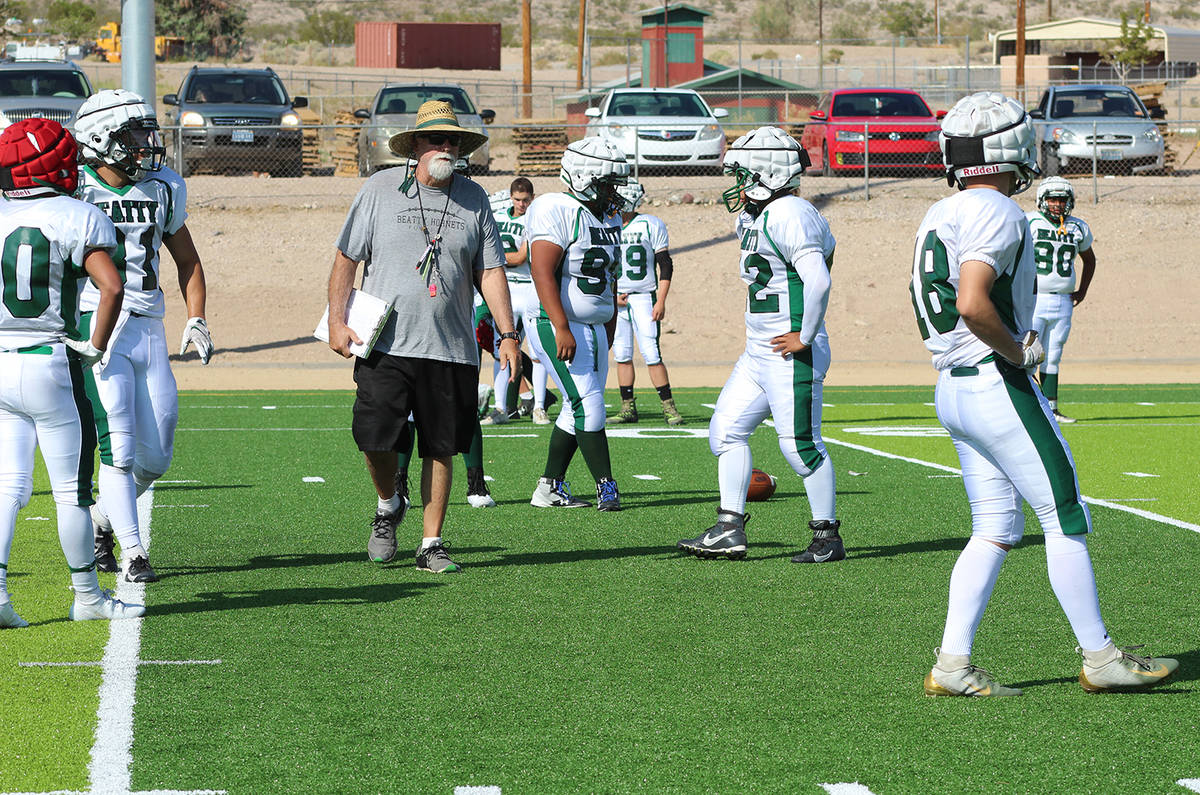 File photo Beatty High School football coach and athletic director Leo Verzilli firmly believes the Hornets should be playing football next month, but he said that as of now only three guaranteed games are on the schedule if that happens.

It’s been nearly 11 months since Nevada shut down high school sports because of the COVID-19 pandemic.

All neighboring Western states have done so as well, to varying degrees. Competition in Nevada thus far has been limited to a few schools competing in flag football and skiing.

Like Nevada, California and Oregon planned to contest all of their sports seasons during the spring semester, which began in January. The cross country season recently began as scheduled in California, but that is the only sport that is in season and allowed to compete under its current guidelines. Oregon has yet to begin play.

Arizona, Idaho and Utah each have held its sports seasons at the usual times, but each has faced obstacles.

It’s been a bit of a roller-coaster, despite the fact that all sports have been contested.

Football was played starting in early October, made it through the season and crowned state champions, but there were games canceled each week.

The most significant COVID-19 development came in swimming. Brophy Prep, a private all-boys school in Phoenix, had its dynasty of 32 consecutive state championships come to an end when it pulled the team from the competition after a team member tested positive.

With the state having the highest rate of new COVID-19 cases in the country, the Arizona Interscholastic Association voted to cancel the winter sports season in January. It reversed that decision four days later, but all athletes and coaches — including athletes who are competing — must wear a mask. No fans are allowed.

There has been renewed optimism that a full sports season could be played in California after Gov. Gavin Newsom on Jan. 25 lifted stay-at-home orders.

But there’s a long way to go before all sports get the go-ahead to resume. California is the most populated state in the country with 39 million people, which means more COVID-19 concerns and frustration.

“We are frustrated that 47 states have played football (or plan to), and we don’t have a plan,” Casey Taylor, the football coach at Inderkum High School in Sacramento, said in an email. “We have data through workouts that show we can play safely. We feel kids are an essential business and need to have the opportunity to play.”

The state uses a color-coded tier system, and 95% of California’s counties are in the purple “widespread” tier, the most restrictive. Only outdoor noncontact sports are allowed in this tier, and there have been some California Interscholastic Federation-sponsored events held in those sports.

Baseball and softball would be allowed in the red “substantial” tier, while football is in the orange “moderate” tier. Basketball and wrestling fall in the yellow “minimal” tier. No counties fall in the minimal tier at this time.

Eric Cavaliere, the football coach at Oak Ridge High School in El Dorado Hills, expects there to be a shift in several purple counties to red over the next few weeks. He hopes coaches and the CIF can convince the governor’s office to move football from orange to red, but time is running out.

“There is some optimism. With football, it’s an orange-tier sport, and we’re a long way from orange,” Cavaliere said. “We have to be in the orange before March 8. Otherwise, our football season is canceled.”

Some football games were canceled, and four Boise schools started their seasons late and with a district-only schedule. There was also some question as to whether the same Boise schools would be allowed to compete in winter sports, but they ultimately voted to play.

For the most part, the sports themselves have gone off without a hitch. The biggest point of contention in Idaho has been crowd size. There were no fans allowed at some events in the late fall and early winter. But Gov. Brad Little announced Tuesday schools could admit fans at 40% capacity or four tickets per student participant, whichever is larger.

Like California, Oregon’s counties are color coded as to the severity of transmission rates. While the majority of the state is in the red “extreme” tier, there are 11 counties that fall under the orange “high,” yellow “moderate” or green “lower” tiers.

Full-contact sports such as football, basketball and wrestling are prohibited, regardless of the tier. Noncontact and minimal- and medium-contact sports can be played in each tier, but the difference is how many teams and spectators are allowed in each competition.

No sports seasons have begun in Oregon. Volleyball, soccer and cross country will start Feb. 22 if there are no changes by then.

Utah has separated its counties by high, moderate and low transmission rates and placed limits on how many fans can attend based on those tiers.

Each winter sport athlete is tested for COVID-19 once every two weeks, and protocols such as virtual coaches’ meetings have been implemented in wrestling to try to limit contact.

“We’re happy the kids are playing and participating,” Olympus High School boys basketball coach Matt Barnes said. “You’ve got to be cleared and healthy to play. Some programs have shut down, just like the NHL or NBA. It’s basically the same protocols.”

Barnes said football teams didn’t have to test until the state semifinals, and there were teams that forfeited playoff games because they had too many cases. But Utah crowned state football champions in the fall.