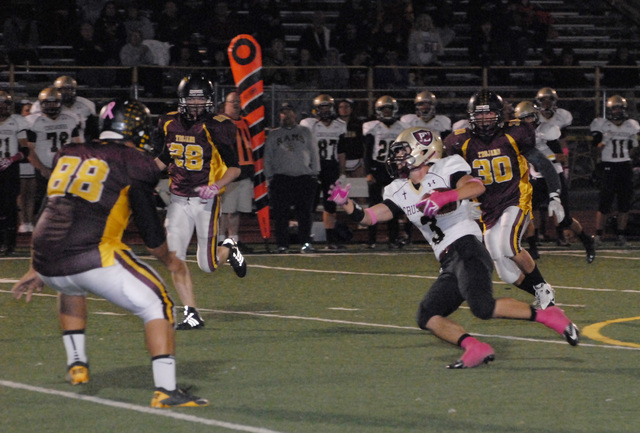 The Nevada Interscholastic Activities Association had its biennial meeting on realignment of Division 1-A on Feb. 27 and was supposed to announce teams going to Division 1. There are no teams. Instead the NIAA dropped a bombshell and said there are as many as five teams that could move to 1-A starting next season.

The meeting the NIAA held with all of the Division 1-A schools was the first realignment meeting and was part of a deal made with the original Division 1-A teams. The meetings would occur every two years to evaluate progress and the level of competition.

When the division was first formed back in 2012-2013 the schools were told they could move to Division 1 if the school athletic programs accumulated enough points. A rubric was established and teams were given points after each athletic season. A team making 150 points or more in the two-year period would be moved to Division 1.

These two schools were not moved because they had made an agreement with the 1-A, which gives them an option to remain or go to Division 1.

There were four schools given this option to remain in the Division 1-A despite their rubric total. These schools were the following: Faith Lutheran, Virgin Valley, Moapa Valley and Boulder City.

NIAA Southern Coordinator Bob Northridge confirmed that no schools will be moving to Division 1, but said based on his recommendation there may be as many as four coming into the 1-A in the fall.

“What was decided at the meeting was the two lowest teams in points from the Sunset and Sunrise Leagues in Division 1 will be moving to the 1-A,” Northridge said.

He explained that there were five teams suffering from low points in the last two years and in order to save their athletic programs the NIAA would move the teams to the 1-A.

Northridge said not all of these schools think this move is a great idea and want to be saved.

“It’s fifty-fifty with these schools. Just like some of the first 1-A schools. Some liked it and some didn’t. Some thought it was a slap in the face and others were really happy,” he said.

The following five schools all have accumulated less than 15 points which could mean a possible move into Division 1-A for next season: Desert Oasis with 11, Spring Valley 9, Sierra Vista 6, Rancho has 11 and Del Sol 0.

The realignment committee will meet again in April to make their final decision.