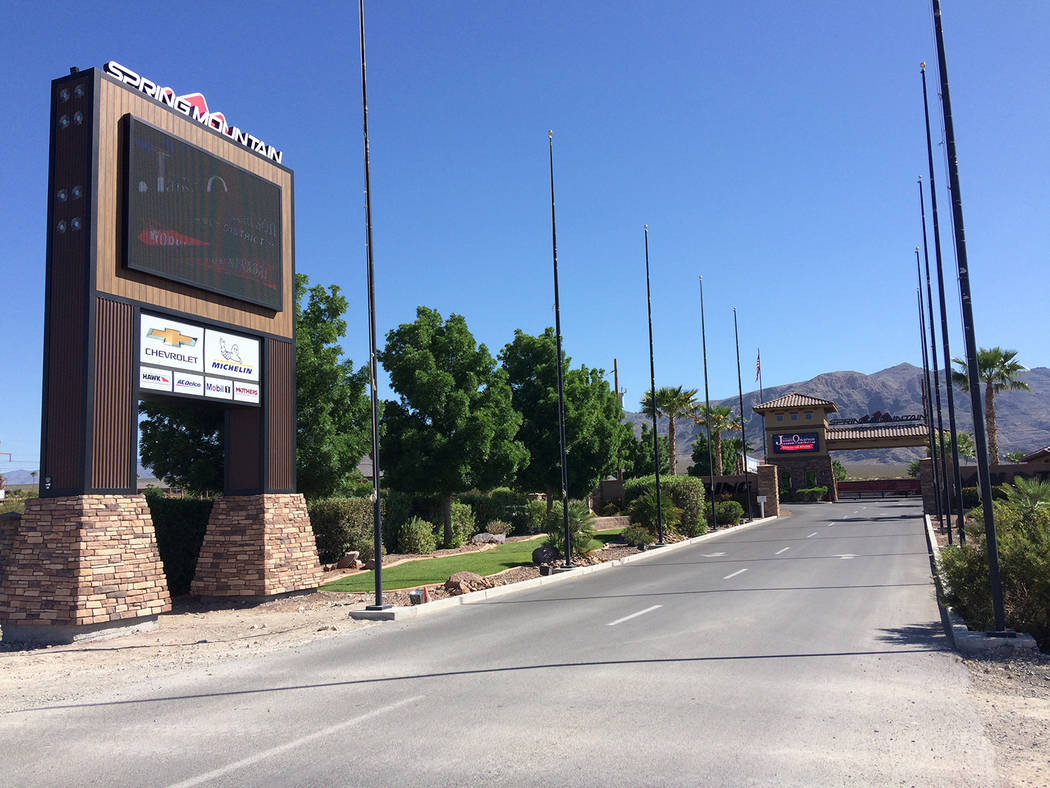 Robin Hebrock/Pahrump Valley Times The entrance to Spring Mountain Motor Resort and Country Club, as shown in this photo, taken May 10. The resort plans to make its private racetrack the longest in the world. 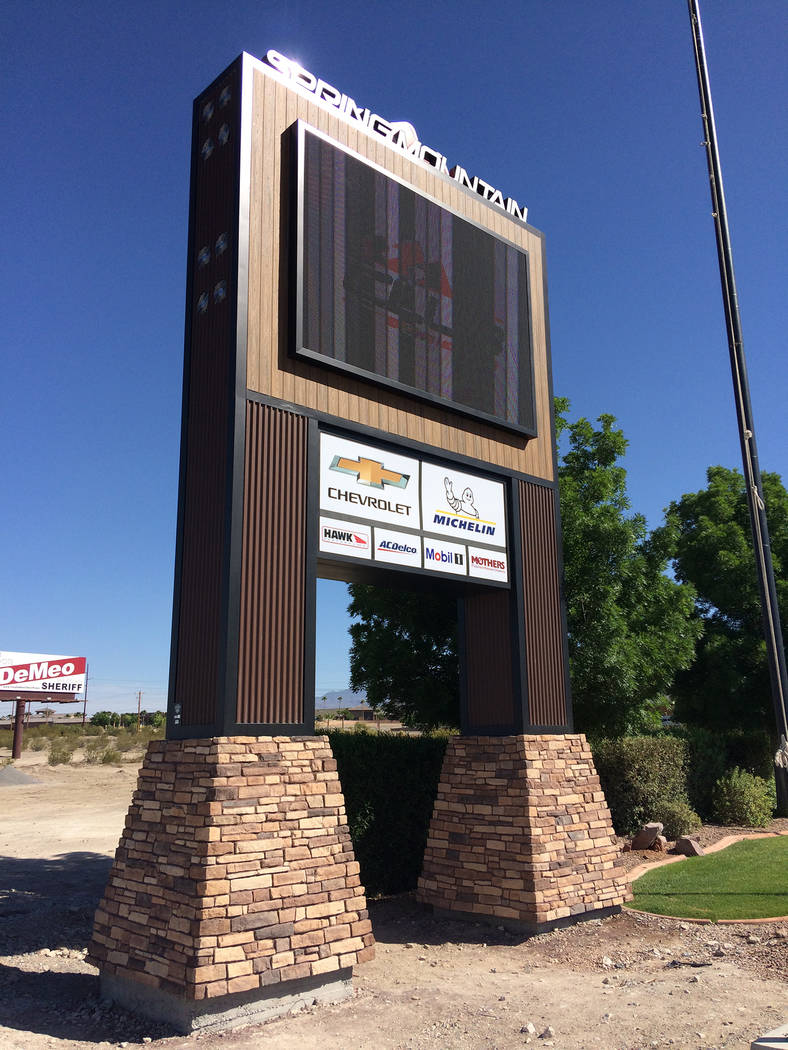 Robin Hebrock/Pahrump Valley Times Already a well-known destination for adrenaline lovers, the Spring Mountain Motor Resort and Country Club is looking to expand onto an additional 605 acres in order to grow its raceway, which could one day be the longest on the globe. 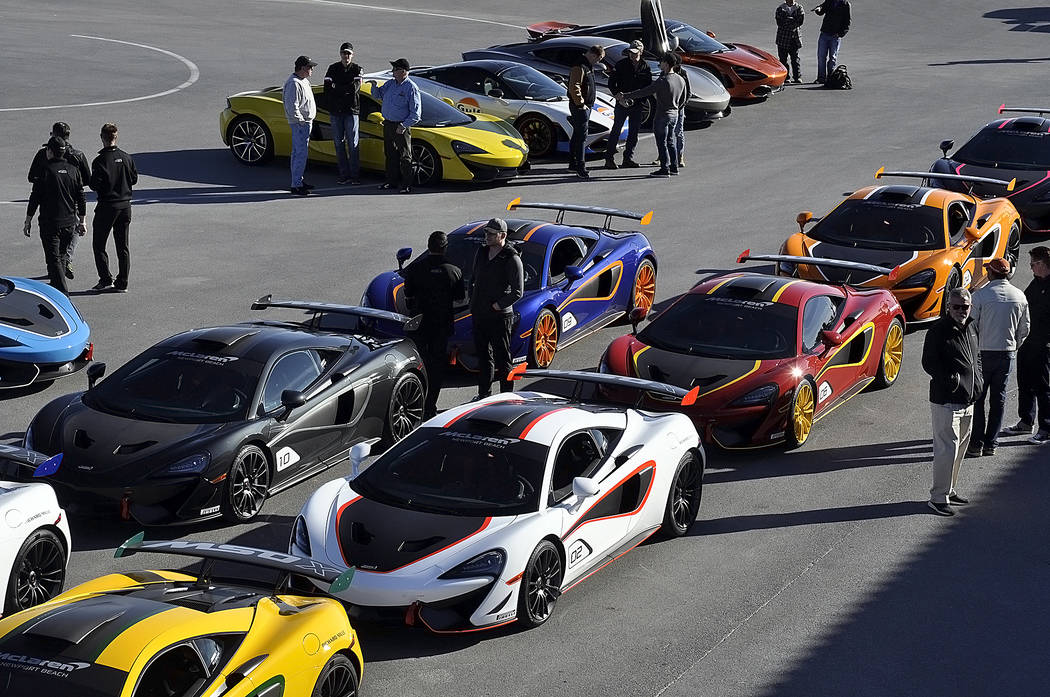 Horace Langford Jr./Pahrump Valley Times Several specially designed supercars from U.K.-based McLaren were delivered on Jan. 26, 2018 to 10 customers at Pahrump's Spring Mountain Motor Resort and Country Club. The owners, who purchased their cars at Newport Beach McLaren in California, lined up for a victory lap at the race track.

Spring Mountain Motor Resort and Country Club is seeking to expand its racetrack and is eyeing roughly 605 acres of Bureau of Land Management lands adjacent to the existing facility. If the motor resort can clear the hurdles of county and BLM approval, they could be well on their way to constructing the longest raceway on the planet.

One of the first steps being taken in pursuit of the expansion is a local zone change, along with what is defined as a minor amendment to the Pahrump Master Plan. The Nye County Commission will be discussing these items at its next meeting, with a public hearing set for Tuesday, May 15, at or after 11 a.m.

The requested changes, if approved by the commission, would alter 605 acres from Reserve zoning to heavy industrial with Special Projects Overlay zoning and amend the Pahrump Master Plan to identify the area as Special Plan of Development lands, rather than BLM Disposal Nomination lands.

The 605 acres in question are a portion of a 13,305-acre parcel managed by the BLM. According to information provided on the proposal, the property is located at 2831 S. Highway 160, northeast of the highway and on the alluvial fan, in an area well-known for recreational activities. Familiar landmarks within the 13,305-acre parcel include Wheeler Pass, Wheeler Pass South and Carpenter Canyon Road, which act as access points to the Spring Mountain National Recreation Area.

These roads were a topic of concern for the Pahrump Regional Planning Commission, which addressed the requested changes at its April 25 meeting with the object of providing a recommendation to the Nye County Commission.

Planning chairman Greg Hafen II and vice chair Robert Adams both remarked that they wanted to ensure OHV access would be retained, to which Spring Mountain Motor Resort Strategic Development Director Joel Oscarson explained that the 605 acres would not affect either of the aforementioned roads.

Despite these assurances, meeting attendees still expressed anxiety over the proposal. Anyone who has trekked into the Spring Mountain Recreational Area on the Pahrump side of the mountain will undoubtedly have witnessed its sprawling wilderness and incredible views and many residents expressed concern about the potential of building marring that beauty.

“I purchased my property so I could enjoy the BLM land, the view of the mountains,” Ron Strand, who owns land near the BLM parcel, said. “When they start talking about heavy industrial, you need to be aware of all that entails.” Strand touched on the PEPCON explosion, as well as a chlorine gas plume that forced an evacuation in Henderson just a few years later. “They are talking about serious things that could affect every resident in Pahrump.”

Another speaker named Vivian, who did not spell her last name into the recorder, concurred with Strand, noting that she is not against racing itself but she too was concerned about the heavy industrial zoning. “The best selling point of any community is its intrinsic beauty,” she said. “Heavy industrial zoning would be a potential threat to the high quality of life, as we know it, in Pahrump. Let’s keep our most beautiful areas as is, to be enjoyed by all.”

She also expressed concern with the environmental impacts of development of the area, citing tortoises, burros and other creatures. However, this was one issue Oscarson reassured the public about, stating that environmental studies and mitigation of impacts to the environment would be a major part of the process moving forward.

Additionally, it was made clear that the zone change would only affect the 605 acres, not the entire 13,305-acre parcel as many seemed to believe. Oscarson also clarified that the cost of the changes, which could come to $17,000, would be borne by the raceway and not by the county.

As for water concerns, these were addressed by a series of special conditions of approval. No additional residential development is to be allowed on the 605 acres and the raceway will be limited to 50 acre-feet annually of water use for that parcel.

The development must comply with the Basin #162 Groundwater Management Plan, including the portion requiring dedication of water rights or mitigation of water use and the section outlining the county-adopted water conservation plan. Other special conditions were also attached, such as buffers between disparate uses on the land.

The raceway would also be required to go back before the planning commission or Nye County Commission prior to actually developing any of the 605 acres in order to obtain either a development agreement with the county, amend the existing development agreement or secure a Conditional Use Permit. Planning staff emphasized that no permissive uses would result from the zone change or master plan amendment.

The Pahrump Regional Planning Commission voted to recommend approval of the requested changes by a vote of 4-0 with planning board members Greg Hafen II, Robert Adams, Elizabeth Lee and Leah-Ann DeAnda all in favor and members Derek Fowler and Gary Bennett absent.