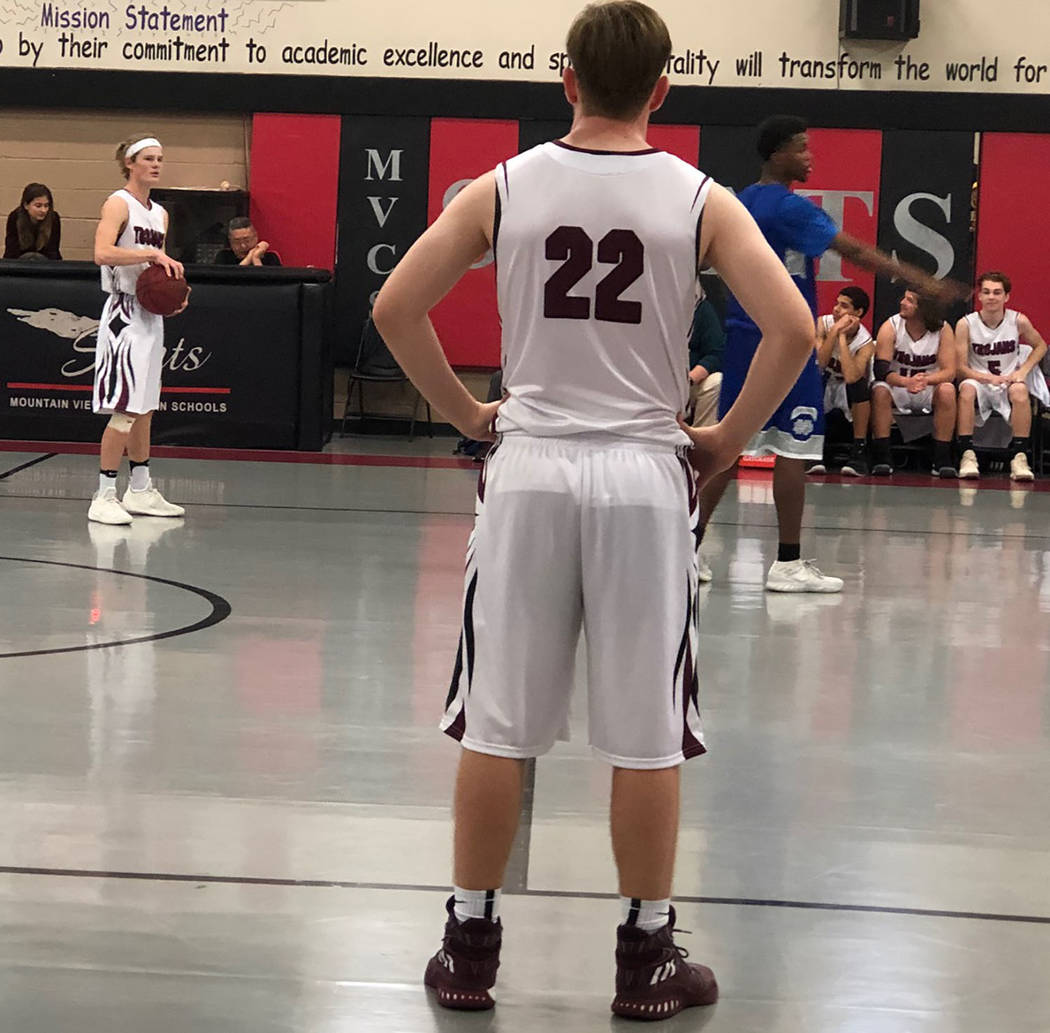 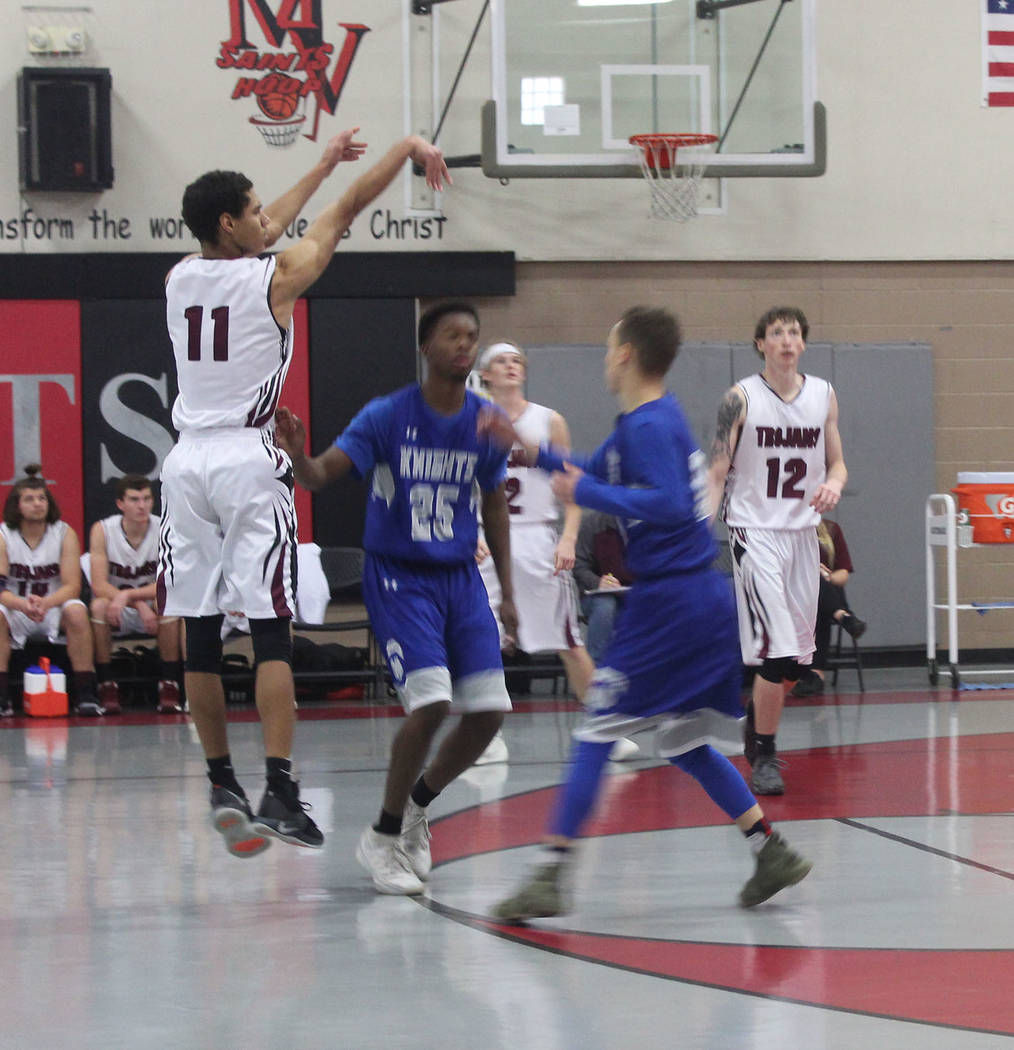 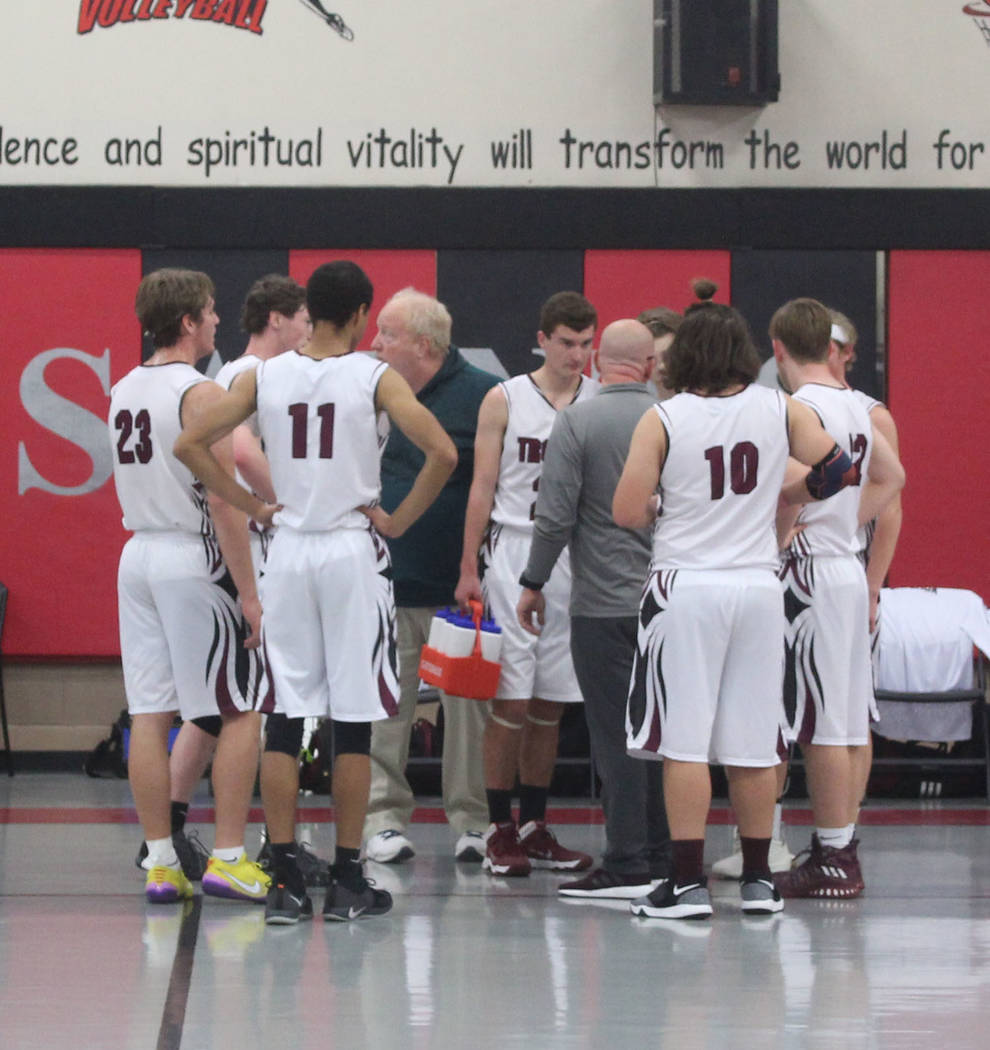 Through three games at the Las Vegas Invitational, the Pahrump Valley boys basketball team had not needed a clutch performance. But after winning by 27, losing by 22 and losing by 31, the Trojans found themselves in an overtime dogfight with Nuview Bridge.

The junior guard connected on seven consecutive free throws spanning the fourth quarter and overtime and finished with 19 points to lead the Trojans to a 63-55 victory over the Knights on Saturday at Mountain View Christian School in Las Vegas.

“My mom made me shoot a lot of free throws as a kid, so I was prepared for that,” Odegard said.

Odegard dominated the overtime while doing very little with it, as the Trojans went into a four corners-style offense when they took possession of the ball.

“We talked about holding the ball in regulation, but we just couldn’t,” Trojans coach Dan Clift said. “They were pressing us, and we were getting into transition. But we practice that a ton. We just want to hold the ball. They go into that packed-in 2-3 zone, and we just held the ball. And that worked.”

Being content to stay back in their 2-3 zone might have been a strategic blunder by the Knights, who failed to capitalize on the momentum from the fourth quarter’s unlikely finish. After Odegard put Pahrump Valley up by three with two free throws with 7.8 seconds left, the Knights called time out to set up a final play.

They worked the ball around to senior forward Luis Rodriguez, who launched a desperation 3-pointer from the corner. The ball bounced high off the rim as the buzzer sounded, and the Trojans only could watch helplessly as it fell cleanly through the net to force overtime.

“That was horrible,” Clift said.

But the Trojans calmly put their plan into effect in the overtime, which meant four of them calmly watched Odegard calmly hold the ball near midcourt, waiting for the Knights to make a move. After 1 minute, 25 seconds had ticked away, James Walter fouled Odegard, who sank both free throws.

“We want them to come out and play defense, and more importantly we want to run some time off the clock,” Clift said. “So if they’re going to sit in the 2-3 zone and let us hold the ball, we’ll hold the ball.”

After an illegal screen call on the Knights, the Trojans again played keepaway, and again Odegard held the ball until he was fouled again by Walter. Two more free throws and the Trojans led by four with 51.6 seconds left. After a missed shot the Trojans got the ball right back to Odegard, who was fouled in the backcourt. He made the first but finally missed on the second one, but by then it was 60-55 with just 34.4 seconds left.

“It was a lot of fun,” Odegard said of the stall-ball tactic. “We’ve never gotten to do that. We’ve tried to run that multiple years now, and it never worked out, so it was fun to see that.”

The final three points came courtesy of senior forward Chance Farnsworth, who finished with 15 points, including 6 of the Trojans’ 8 points during the third quarter. Forwards Garrett Ward and Brayden Severt each finished with 8 points for Pahrump Valley.

The fact those three combined for 31 of the Trojans’ 63 points was not lost on Odegard.

An added bonus for the Trojans, who have had a habit of seeing at least one big man foul out frequently this season, was that they played without getting in foul trouble. The Knights never went into the bonus and shot only eight free throws for the game, making five, while the Trojans were 19 of 27 (70 percent).

Earlier in the tournament, Severt scored 15 points and Odegard added 10 during a 62-40 loss to Buckley, California, as 10 players scored for Buckley. Then the Trojans could do nothing with Capistrano Valley Christian’s Festus Ndumanya, who poured in 29 points to help hand Pahrump Valley a 71-40 loss. Severt and Farnsworth scored 10 points apiece, while Odegard added 9.

Odegard was named to the all-tournament team as the Trojans split four games in the event before returning to regular season play Tuesday at Chaparral.

“We come out of here with two wins, and that’s great,” Clift said. “That’s awesome.”