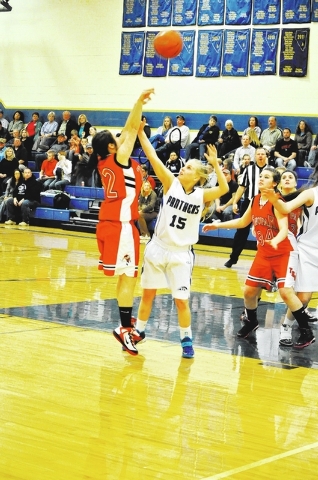 According to the Pahranagat Valley High School Athletic Director Brad Loveday, the secret of their success is not complicated and lies in their approach to sports. The school simply started youth programs and involved the high school with these programs. In addition, the school has secured over the years top-notch coaching.

“This is my 22nd year at the school. Me and Mike Strong came here almost together. He came in right after me. When we came in we weren’t the most dominant team in every sport. We had some years before us that they had done really well in basketball and football. For the most part, we were not very successful. It was like a learning process of the coaches we went though,” he said.

Part of this learning process involved relearning what he already knew. He was coming from Las Vegas and his natural tendency was to draw from his Vegas experience and apply it in Pahranagat Valley.

“I am a baseball coach and Mike is a softball coach. When we first came in I said let’s take the baseball kids and make them practice all year long. I thought that is the only way we are going to get better. That was kind of the mindset. I came out of Las Vegas and that was the mindset there. We played a lot of baseball, but this just didn’t work at all for a small school,” Loveday explained.

After experimenting, Loveday figured out that for PVHS the best thing for his athletes was to play sports all year long and three different ones. He found out through trial and error that if he had a kid playing baseball all year long no other sport could use this athlete.

“You can’t be hogging the kids and have kids just playing baseball or basketball all year. Athletes need to play sports. What we found is if a kid is playing football and basketball, they will be more athletic when he gets baseball anyhow. So we went through that learning process of kids need to participate in multiple sports. Right now we only have 67 kids in our school,” he said.

Once this was learned, the high school coaches need to put the youth sports component together. When Loveday started, there were no youth sports in the area. Youth sports are needed to teach the kids the fundamentals of the sport so they are not learning them in high school.

“The basic idea is that by the time they get to high school they have nine years experience in every sport they are doing,” the director said.

Loveday said all of the coaches were involved in the youth program. This meant the kids were learning things they could apply in high school.

“Our coaches are pretty involved with the youth sports, not necessarily coaching but helping the coaches out. We would tell the youth programs the things we would like to see these kids be able to do by the time they are in high school. For example, by the time they are done with Little League hopefully they can swing the bat, catch and throw the ball well. The youth programs have helped a lot. Kids before had never played football until they were freshmen and now they have 9 years experience. It is a huge difference,” Loveday said.

Youth sports programs cost money and require buy-in from parents. Many places like Beatty are dying to have them, but just don’t have the money or the parental support. Loveday said this was a problem at first but the problem was overcome. There just was a huge commitment from the parents. He said they all wanted the programs for their kids.

Money was another factor. Pahranagat Valley had some coaches who were very dedicated to teaching youth. Loveday said one football coach, Lonnie Walsh, came up with a loan for the the Pop Warner team to start and buy all the football equipment. This coach on his own took out a loan and was paid back by the kids’ fees.

The last component of the Pahranagat Valley success is the kids.

“The group of kids we have are the greatest. I believe we have really good kids. If we take a picture of these kids when they are in kindergarten and then look at their senior picture, it would be almost the same kids. These kids not only did they start when they are young; they stay. It is a very stable population,” Loveday concluded.

“Ginger Whipple has been coaching for 30 plus years in volleyball here and that is consistency and well not to sound arrogant, I think we have the best coaches in the state. They do a great job with the kids that they have. When I look on the football field, or basketball court, we are not the biggest or the strongest team, but they are the best coached team. During football and basketball I get to just relax and step back. So that is my view of it. We are not the most athletic team but they play together well. It is fun to watch. there is nothing better than to watch a group of five- foot four-inch kids bump on some six-foot four-inch 220-pound guy. It is fun to watch,” Loveday said.