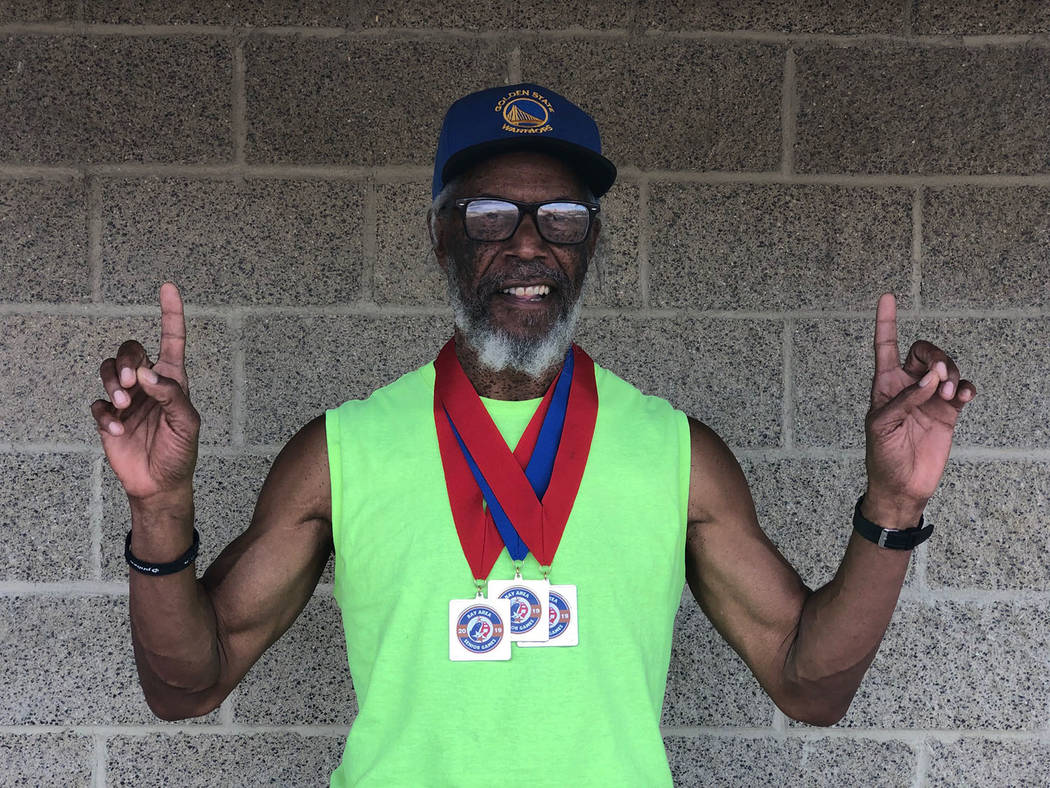 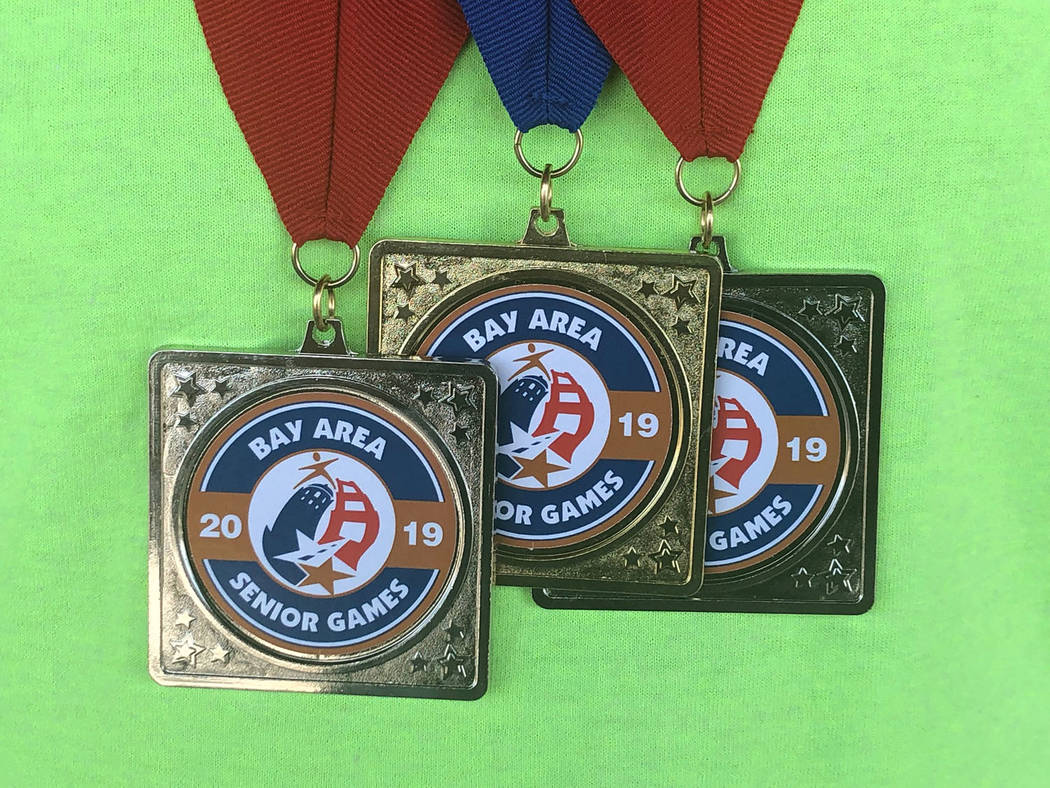 Tom Rysinski/Pahrump Valley Times Marvin Caperton of Pahrump won gold in the 200 meters and silver in the 50 and 100 meters during the Bay Area Senior Games held May 26-27 at the College of San Mateo in California.

Not a lot of things went right for Pahrump resident Marvin Caperton at this year’s Bay Area Senior Games.

Except for bringing home more medals, that is.

With a paperwork snafu, starting in the wrong age group and miserable conditions to contend with, Caperton did what he usually does and brought home three medals, winning gold in the 200 meters and taking silver in the 50 and 100 during the Games’ track and field competition May 26-27 at the College of San Mateo.

“It was raining,” Caperton said. “The whole 200 meters was rain. It rained in between the 50 and the 100, so the track was wet. It wasn’t good conditions for speed. The track is supposed to be fast, and it was slow. I was running faster times in practice.”

The rain almost didn’t matter, as meet officials had no record of Caperton registering for the event, nor paying an entry fee.

“Something happened with the registration, and they didn’t have me on the list,” he explained. “They were very, very nice about it. But I’ve been there the prior three years so I guess they knew me.

“They took my cash, they didn’t charge me a late fee, and I competed, but they uncovered the fact that I was in the next age division, so now I’m 65 to 69.”

But that was after Caperton already had started to run.

“So now I’m running 65 to 69, and I’ve already run the 50 meters, and I got second in the 50 meters because a guy who ran in another heat ran faster than me, which was kind of crazy because I didn’t run as hard as I could,” he said. “I just won the heat.”

The same thing happened in the 100.

“I ran the 100, won my heat, and the 200 I won, but when I got to the 100 I’m still running in the 60-64 age group,” Caperton said. “And the guy I was working so hard for wasn’t even there, so whoever was there, I won the heat. Come to find out I was in the next age division, so this other guy who ran in another heat ran a tenth of a second faster.”

“It’s not to say I would have beaten him if I ran against him, but I know it would have been a lot more competitive,” Caperton said.

Then there was the 200, usually the weakest of the three events for Caperton. But while the conditions made the times somewhat pedestrian, Caperton’s 29.91 was easily the best of the bunch, with the second-place runner crossing in 31.38.

Next up is the National Senior Games, often called the Senior Olympics, which will run June 14-25 in Albuquerque, New Mexico. For track and field athletes, practice will be June 15 with competition running from June 16-20 at the University of New Mexico Track & Field and Soccer Complex.

Two weeks out from the competition, Caperton already has two things going better for him than they had at the Bay Area Senior Games.

“I’m already signed,” he said, laughing. “I know I’m good. I’ve got receipts for the nationals, so that won’t happen again.”

And he will get the chance to face Davis in the same race, rather than matching up times afterward.

“He’s going to be in Albuquerque,” Caperton said. “I’m really looking forward to competing in this age division. I’ve been working real hard, so we’ll see what happens. I should medal in something.”