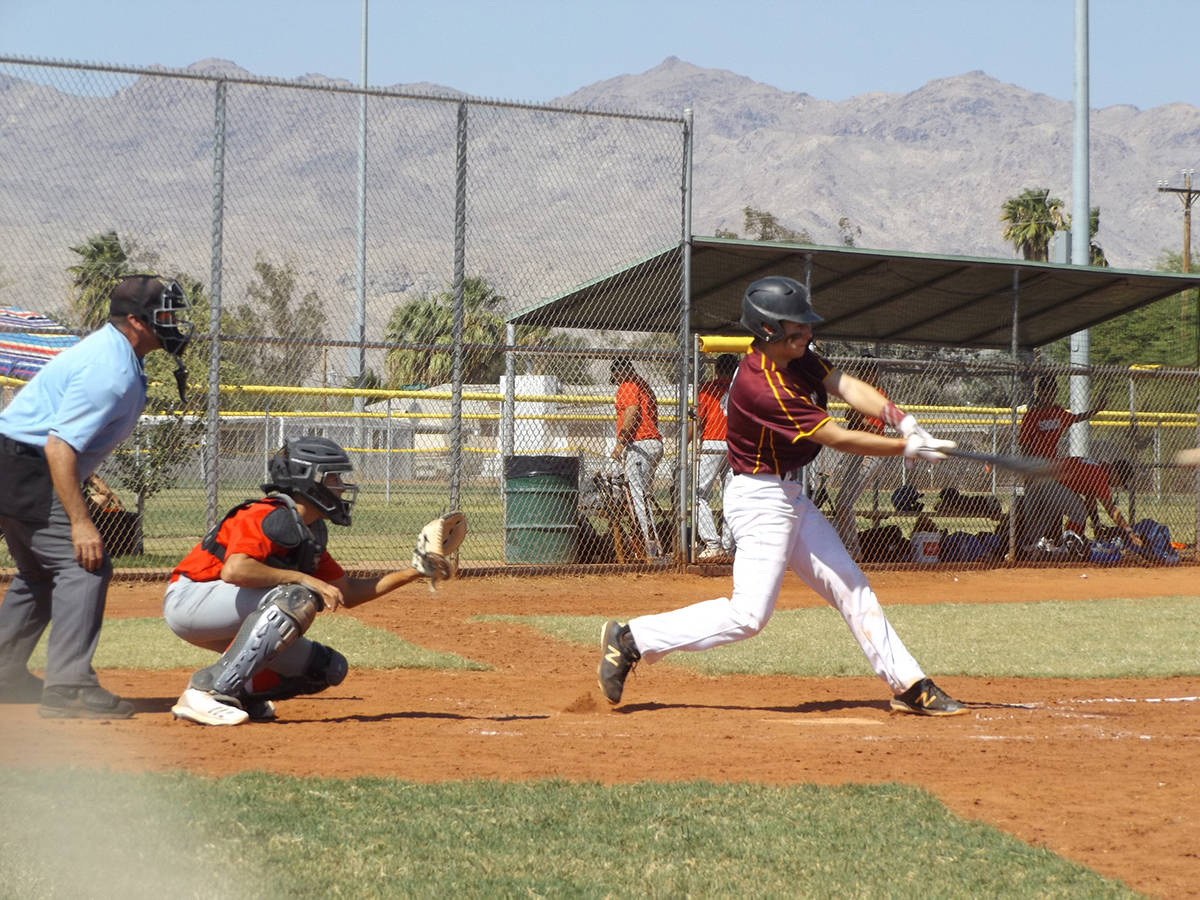 Charlotte Uyeno/Pahrump Valley Times Catcher Coby Tillery connects for a hit for Trojans Gold during the Pink the Park Tournament on Oct. 3 in Bullhead City, Arizona. 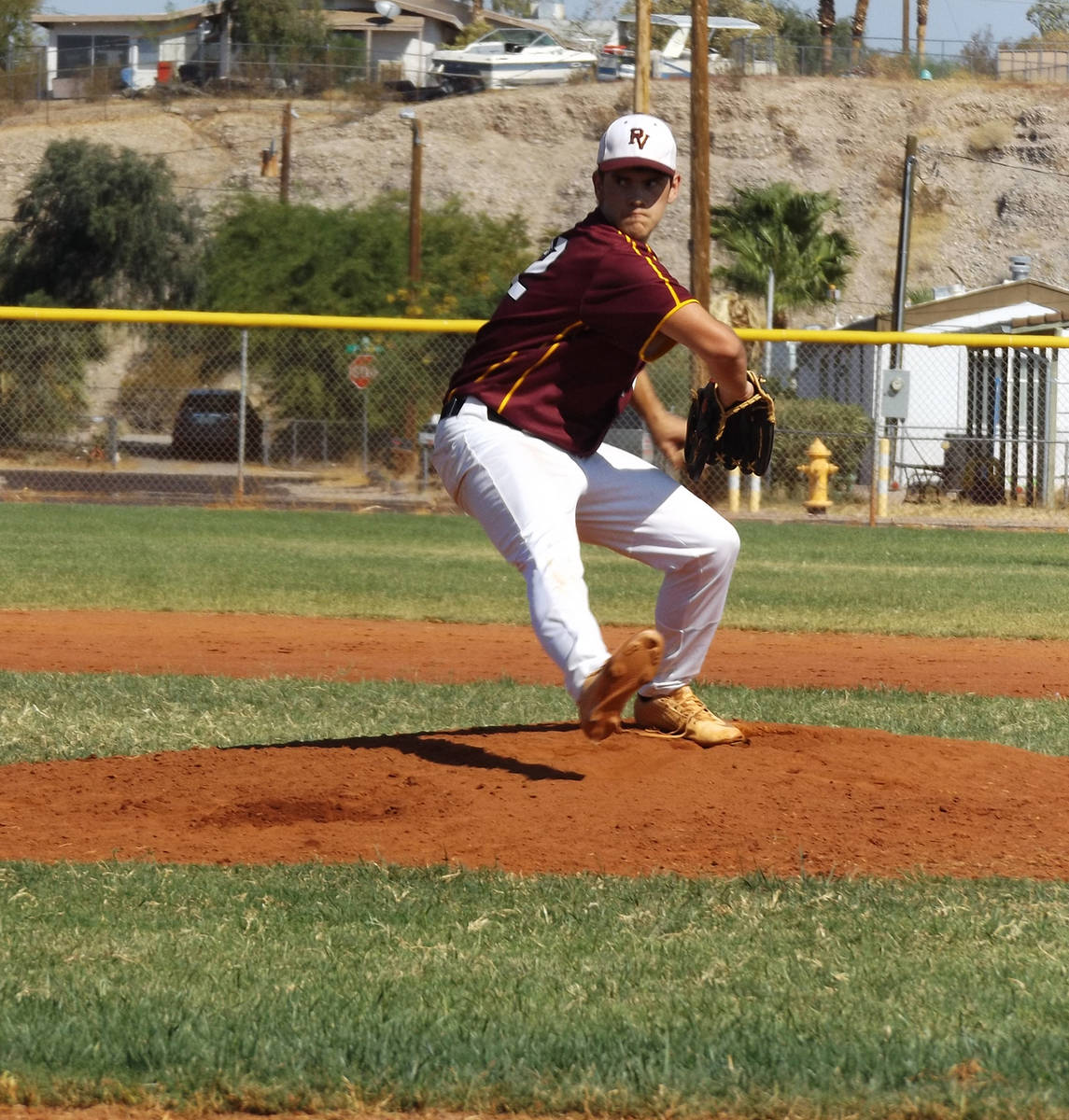 Charlotte Uyeno/Pahrump Valley Times Zach Cuellar delivers during the opening game of the Pink the Park Tournament on Oct. 3 in Bullhead City, Arizona, a 10-0 victory over Shock Baseball of California at Rotary Park. 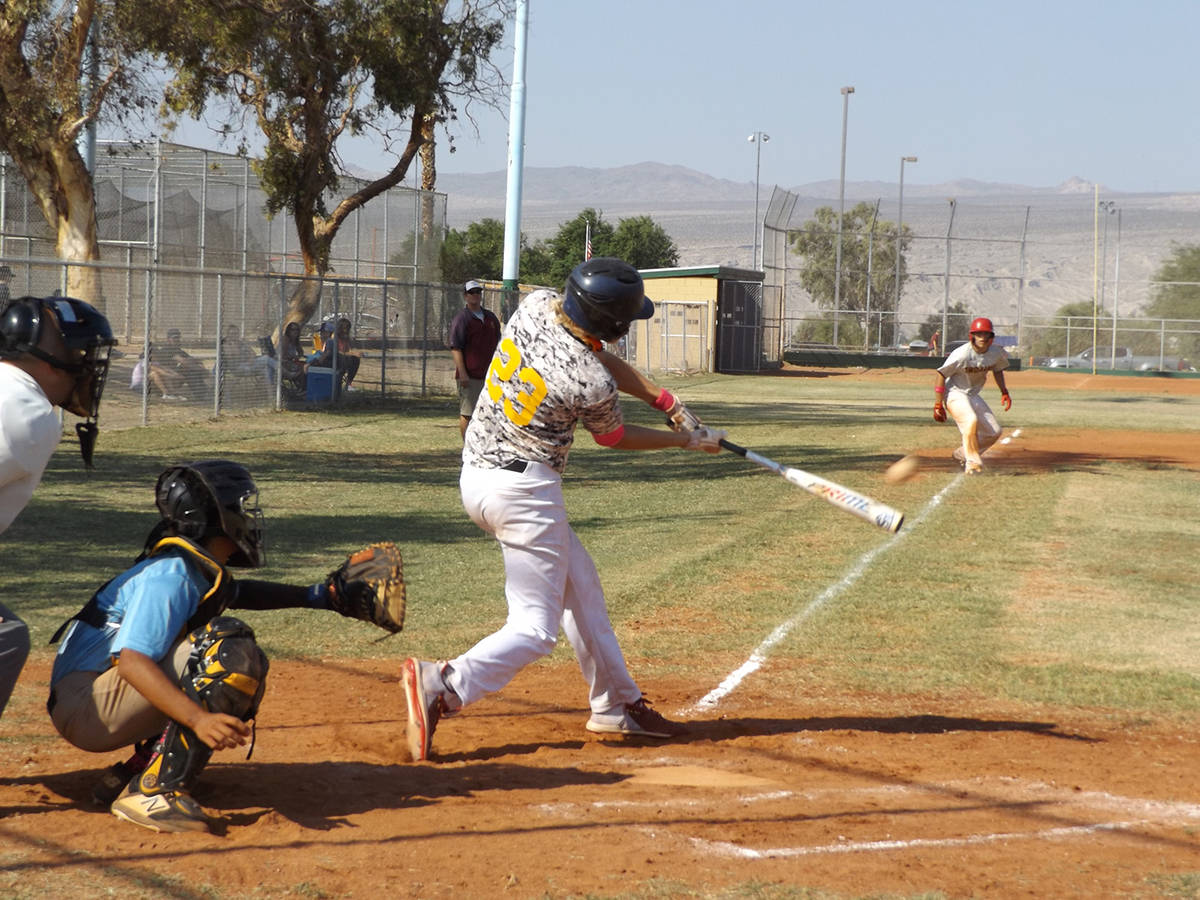 Charlotte Uyeno/Pahrump Valley Times Scott Oscarson gets a hit for Trojans Maroon during the Pink the Park Tournament in Bullhead City, Arizona. 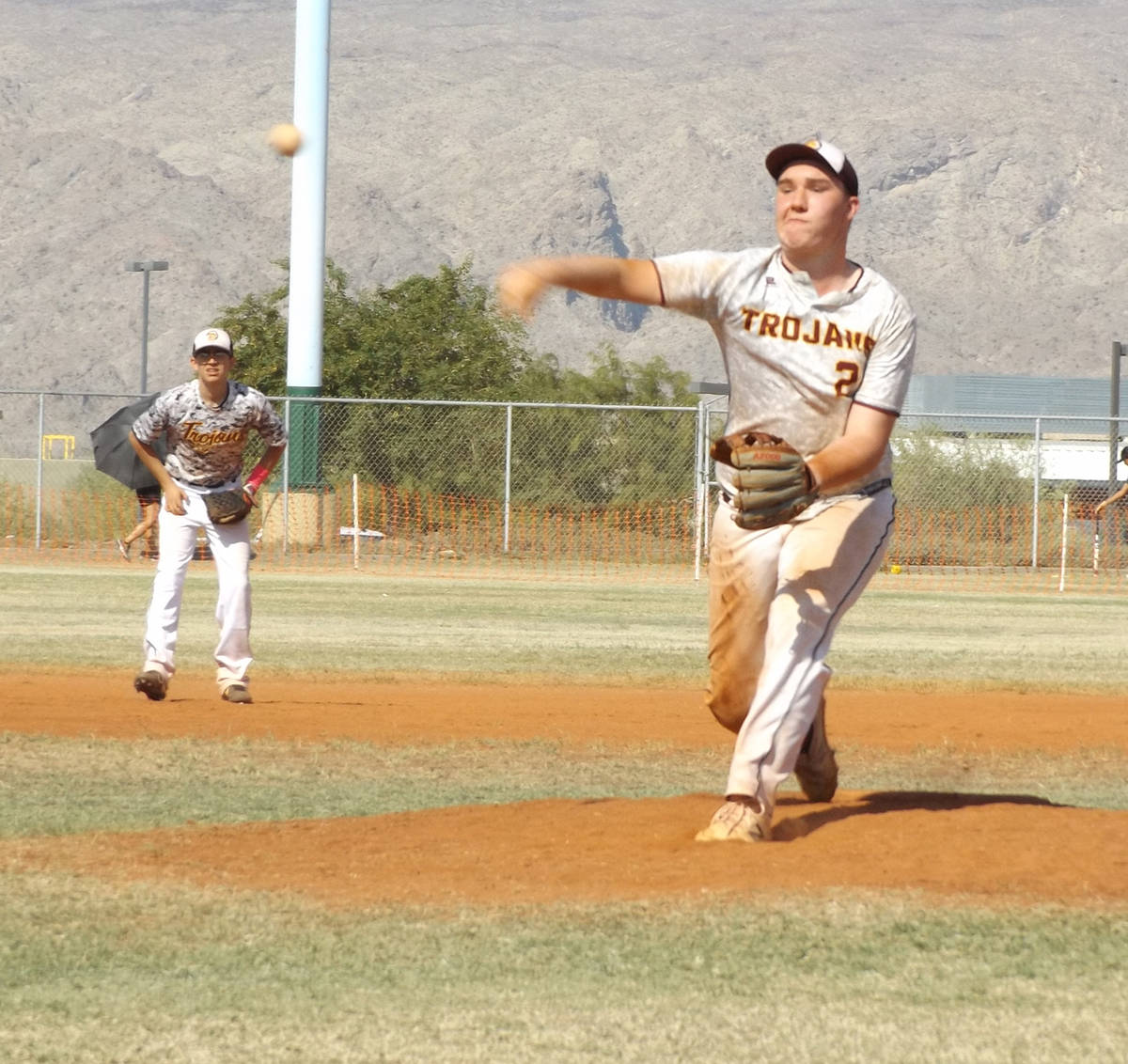 Charlotte Uyeno/Pahrump Valley Times Trojans Maroon's Leo Finkler was on the mound for the team's only win at the Pink the Park Tournament on Oct. 4 in Bullhead City, Arizona, allowing one walk over six innings in a 9-8 win over the Las Vegas Silverbacks in the consolation bracket at Mohave High School. 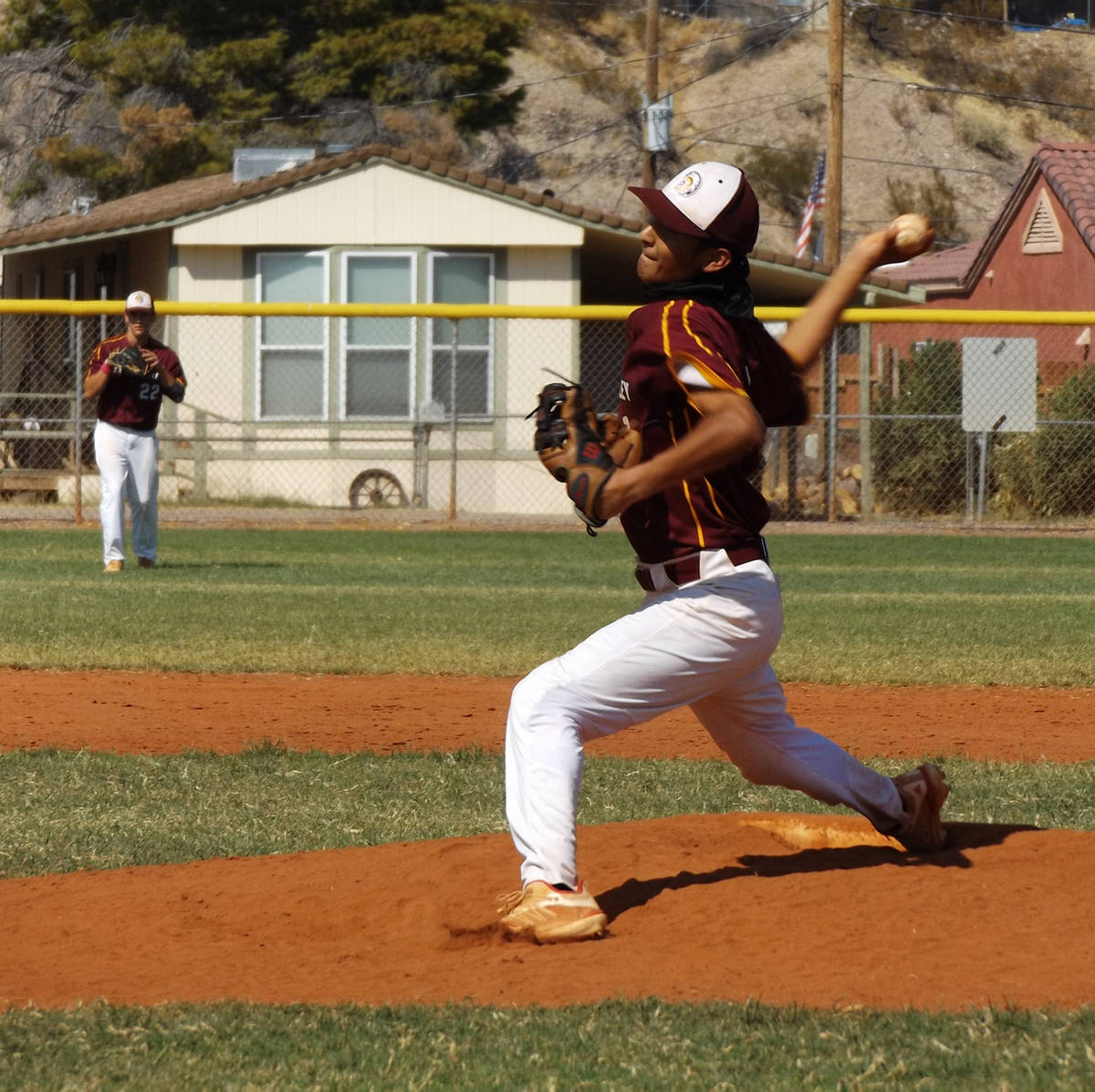 Charlotte Uyeno/Pahrump Valley Times Fidel Betancourt tossed one of four complete games for Trojans Gold during the Pink the Park Tournament in Bullhead City, Arizona, alllowing 4 singles over 5 innings in a 5-1 win over T-Birds White of Arizona in the semifinals at Rotary Park. Zack Cuellar is in left field. 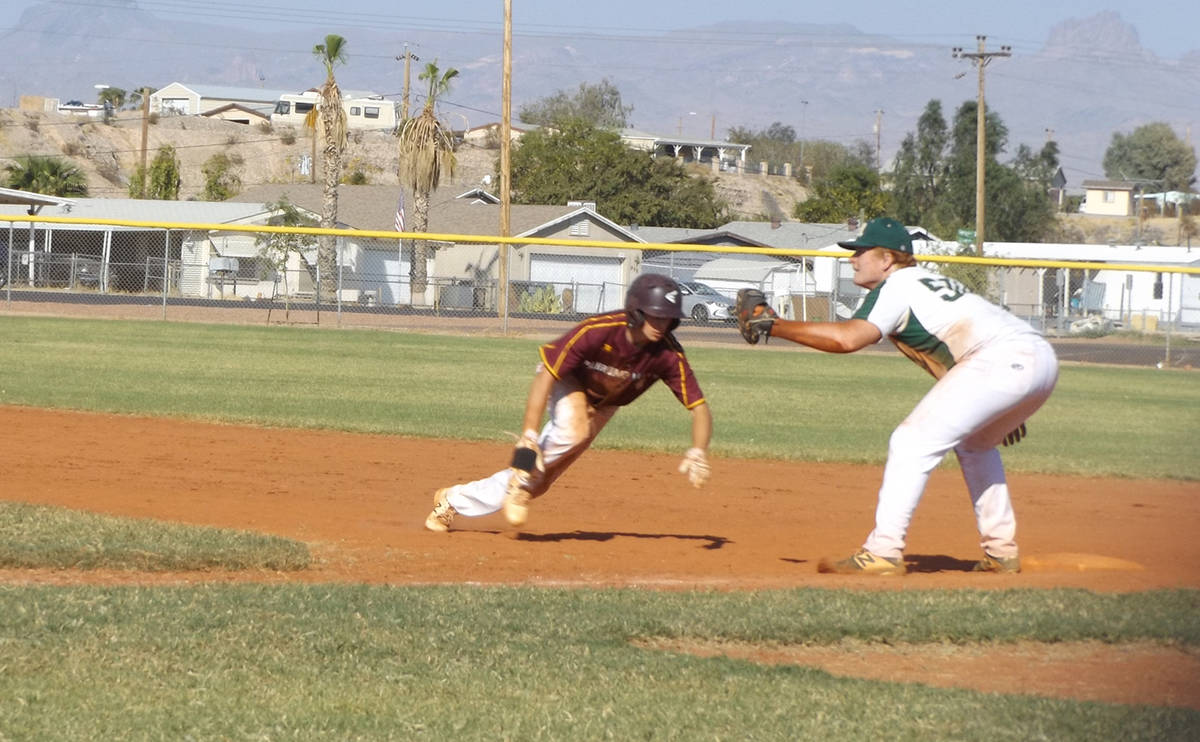 Charlotte Uyeno/Pahrump Valley Times James Metscher scrambles back to first base in anticipation of a pickoff throw against T-Birds White of Arizona during Trojans Gold's 5-1 win during the Pink the Park Tournament on Oct. 4 at Rotary Park in Bullhead City, Arizona.

After losing in the title game of their previous tournament in Bullhead City, Arizona, the Trojans Gold baseball club was determined to show the coaches they were not satisfied just by reaching the final.

That attitude was obvious as the Trojans topped the Vegas Raptors 5-0 in the championship game of the Pink the Park Tournament on Sunday at Rotary Park.

“We went through four games and threw four pitchers,” Trojans coach Drew Middleton said. “We didn’t throw a single reliever the entire tournament. That is insane to do.”

There was the occasional dicey situation. In Sunday’s first game, Arizona’s T-Birds White opened the first inning with two rockets off of Betancourt to put runners at second and third with nobody out.

At least one person wasn’t worried.

“Not to be cocky or anything, but when I saw second and third I knew they weren’t going to score,” Betancourt said. “I knew what they were about last time I pitched them,” which was two weeks earlier.

Betancourt struck out the next two batters and then got some help from Scott Hirschi, who made a phenomenal running catch in short right field to save two runs.

“He gets closer and closer, and I was like, all right, maybe … and the next thing you know he’s catching the ball and lying on the ground,” Middleton said. “There’s no way he just caught that. Scotty played really well for us this weekend.”

Betancourt allowed 2 singles the rest of the way, and there was just enough offense for a 5-1 win that sent the Trojans into their second consecutive championship game.

Just enough meant 2 runs on a hit, 2 walks and 2 hit batters in the first, a run on a walk, a fielder’s choice and a Cuellar double in the third, and a run in the fifth when James Metscher was hit by a pitch with the bases loaded.

“In our first three games, we had five hard-hit balls,” Middleton said. “We pushed across runs and put pressure on the defense, but the first three games we didn’t hit the ball too well. That championship game, our bats came alive.”

That they did, as the Raptors quickly discovered. Denton led off the second with a triple to left-center, and Sterling Oshiro followed with a booming double to left. One out later, Cuellar singled home Denton, and Cuellar later scored on a walk to Betancourt for a 3-0 lead.

An inning later, the Trojans showed a knack for picking each other up. Denton doubled, but this time Oshiro lined out softly to short. Coby Tillery, who had struck out in the middle of the previous rally, came through this time with a single to left to score Denton and then scored on a single by Cuellar.

If Hirschi made the play of the first game Sunday, Metscher turned in the play of the game in the second, racing toward his left to make a crazy diving, rolling catch in right field that left both benches stunned. That ended the Raptors’ fifth inning, and because of an angry confrontation in the bottom of the inning after McDaniel wound up on second after a botched infield pop-up, the game was called and the Trojans had a 5-0 win.

McDaniel’s path to a shutout was not an easy one. He loaded the bases in the second on a single, hit batter and a walk but got out of it in part thanks to a Raptors hitter running into the ball outside of the batter’s box, then a leadoff double an inning later was erased by a perfectly executed rundown followed by a pickoff of a runner who left way too early in an attempt to steal third.

“I like just settling in and getting comfortable, and as the game went on my stuff started to get stronger,” McDaniel said. “My curveball was working more, my fastball was starting to get more movement at the end, and I was just feeling it.”

The Raptors running their mouths was something the Trojans were prepared for, although coach Brian Hayes did feel compelled to remind his team, “No chirping,” between innings at least once.

“I heard they run their mouths a little bit,” McDaniel said. “They’re going to try and chirp and get in your head. I wasn’t really surprised when they were chirping right at the beginning. I just had to try and keep my composure on the mound and ignore it.”

He did, as did his defense, as Betancourt turned a double play by stepping on second and firing to first in the fourth and made another slick play to get the first out of the fifth. Two batter later, Metscher made his incredible catch to end that inning.

“You’ve got to tip your cap to Coach Roy (Uyeno),” Middleton said. “His outfield this weekend was insane. To the players’ credit as well. Cuellar came in and made some insane plays, James made some insane plays, then you have Jalen who just covers a football field out in center. Our outfield was great, and our infield — we have four guys who could be varsity starters up the middle.