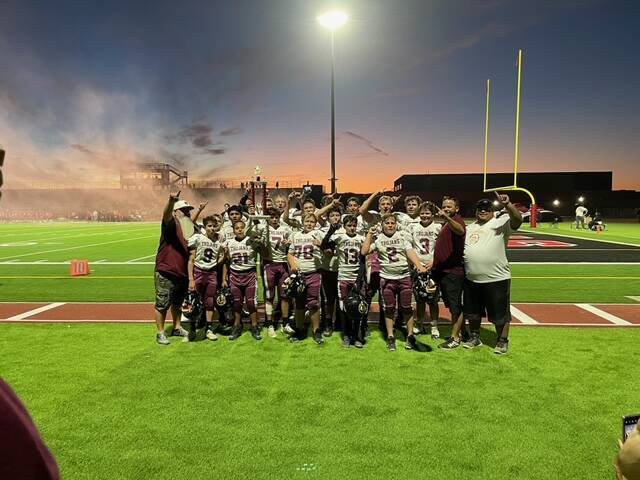 Tina Wilson/Special to the Pahrump Valley Times. Pahrump's U13 football team posing with the trophy after winning the fall 2021 league championship

The season started off rocky for the football team as the head coach, Tom Walker, tested positive for COVID and became very sick. Once Walker got back to work, his team got back to playing “Pahrump football.”

“Hard-nosed,” Walker said, describing Pahrump football. “Being tough. Easily, we were the hardest-hitting team in the league. By far.”

The team plays under the NYS league in Nevada and the team is also part of the Pahrump Youth Sports league.

Walker began coaching this U13 team when they were back in U11, so the players and Walker have built a bond over the years and know each other very well.

To Walker, it was very emotional for him to be able to win this championship with a team that he’s been coaching for the last two years.

“I’m proud of these boys,” Walker said. “They worked their butts off for me and that’s all you can ask as a coach. This is just a great group to be around.”

The next step for the boys of the U13 team will be to play for the Pahrump Valley Trojans at the high school. It should be a smooth transition for the players as coach Walker uses the same scheme as he and the rest of the Trojans’ coaching staff use for the high school’s team.