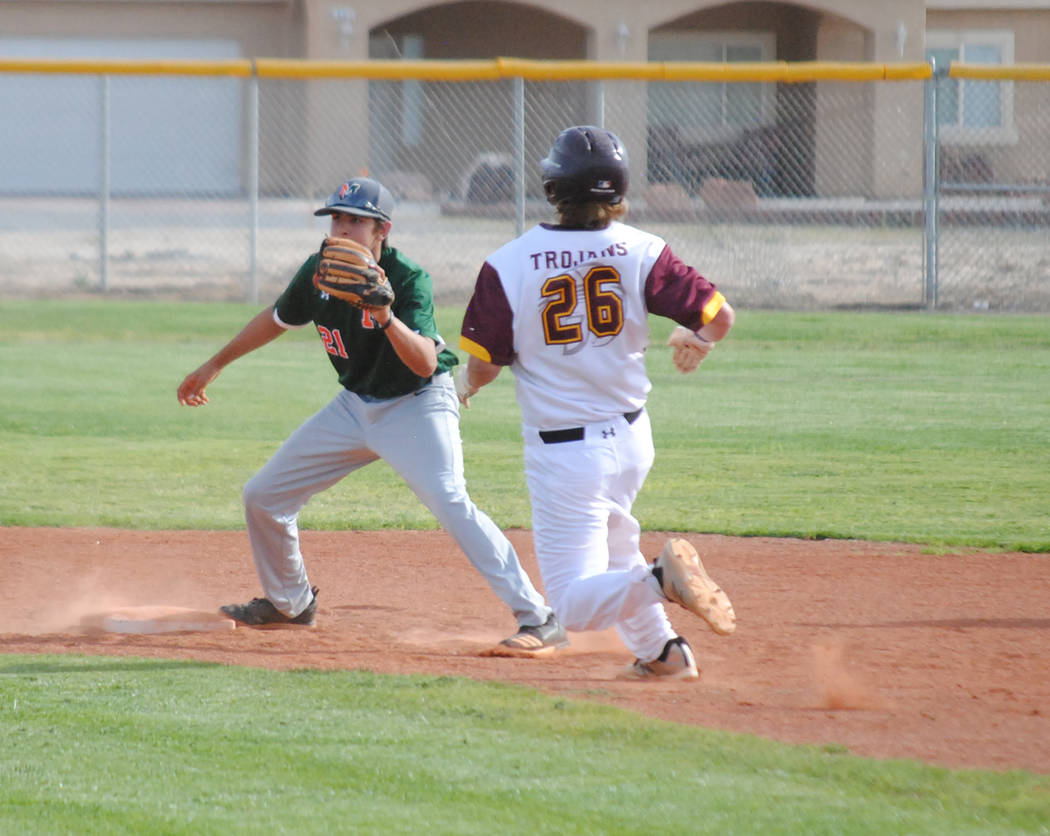 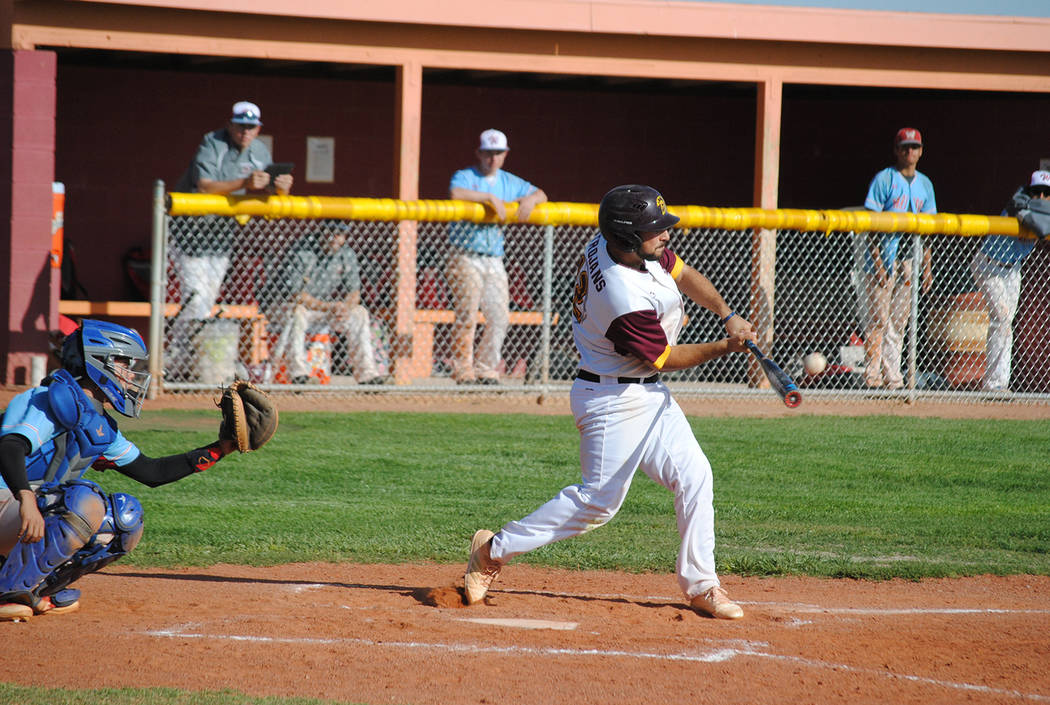 Charlotte Uyeno/Pahrump Valley Times Anthony Charles connects for a base hit against Mojave during Pahrump Valley's 4-3 win April 9 in Pahrump.

Every coach in every sport wants his or her team to peak at the right time, but Pahrump Valley baseball coach Brian Hayes has been watching it happen.

With first place in the Sunset League on the line, catcher Willie Lucas belted a bases-loaded double, right fielder Tyler Floyd went 2-for-2 with a double and a run scored and Garrett Lucas struck out nine while pitching into the sixth inning Wednesday to lead the Trojans to a critcial 5-3 victory over visiting Desert Pines.

The Jaguars and Trojans came in with 5-1 league records, and the Jaguars won the first meeting between the two, 9-2 in Las Vegas. Winning Wednesday gave the Trojans the division lead with three games to play, two against teams they already have beaten by a combined score of 33-2.

“We’re sitting pretty,” Hayes acknowledged. “Desert Pines has two (Sunset League) losses now, and we won the second game. The first time we faced them we didn’t throw Garrett, because last year we threw him twice and they seemed to hit him pretty well the second time.

“And they have a pretty good pitcher, Steven Laureano, who struck out 11 the first game we played them. Our kids knew what to expect this time, and they made some adjustments. We did a much better job of putting the ball in play.”

Garrett Lucas took a shutout into the sixth inning, but Hayes said it took a bit of work to get that far.

“His pitch count got up there a little bit,” Hayes said. “He was up at 62 going into the fifth inning. We made a couple of errors behind him, and he was at 110 when we took him out. We were trying to let him finish it, but we brought in (Cyle) Havel to close it out.”

The Trojans jumped on Laureano with three runs in the third, with the key blow Willie Lucas’ two-run double. The third run scored on a wild pitch.

They were right back at it in the fourth. Anthony Charles was hit by a pitch, Floyd doubled, a wild pitch scored Charles and designated hitter Dylan Grossell’s double drove in Floyd for a 5-0 lead.

Hayes has been pleased to see the bats come to life.

“We’re having some guys step up,” he said. “Brian Horton came out of nowhere, and he’s been hitting the heck out of the ball. He’a a senior who hasn’t played much at all. Even when guys were suspended he hurt his shoulder and was only playing defense. Now he’s got his opportunity, and he’s been running with it.

“Some of our other guys — Tyler Floyd, the Lucas brothers, (Chase) McDaniel was tearing it up for awhile, Dylan Grossell has been hitting the ball well. Before we didn’t have anybody, and we were just hoping somebody would step up.”

The win over Desert Pines gives Pahrump Valley an 8-2-1 record with its roster intact, including six wins in its past seven games. And the seventh, an 8-7 loss to Legacy, saw the Trojans erupt for 15 hits.

“We go to Legacy and get 15 hits, and their pitcher is better than what we had been seeing,” Hayes said. “They’re starting to get that confidence, and the lineup has been consistent now. We were trying to find out who was where, and now we have a pretty consistent idea. … For a while there we didn’t know if our hitting was ever going to come around. We were asking ourselves if we were as good as we thought we were.

Technically, there is still a bit of work to be done, but the Trojans are in the driver’s seat for a No. 1 seed in the Class 3A Southern Region playoffs, which was one of their goals all along.

“We’re sitting where we need to sit, and we just want to keep it up going into the playoffs,” he said. “We’re playing well, but we can play better. If we can get there and stay there, we’re going to be a tough team to handle at playoff time.

“We want to get those first two rounds at home, which would be pretty nice.”