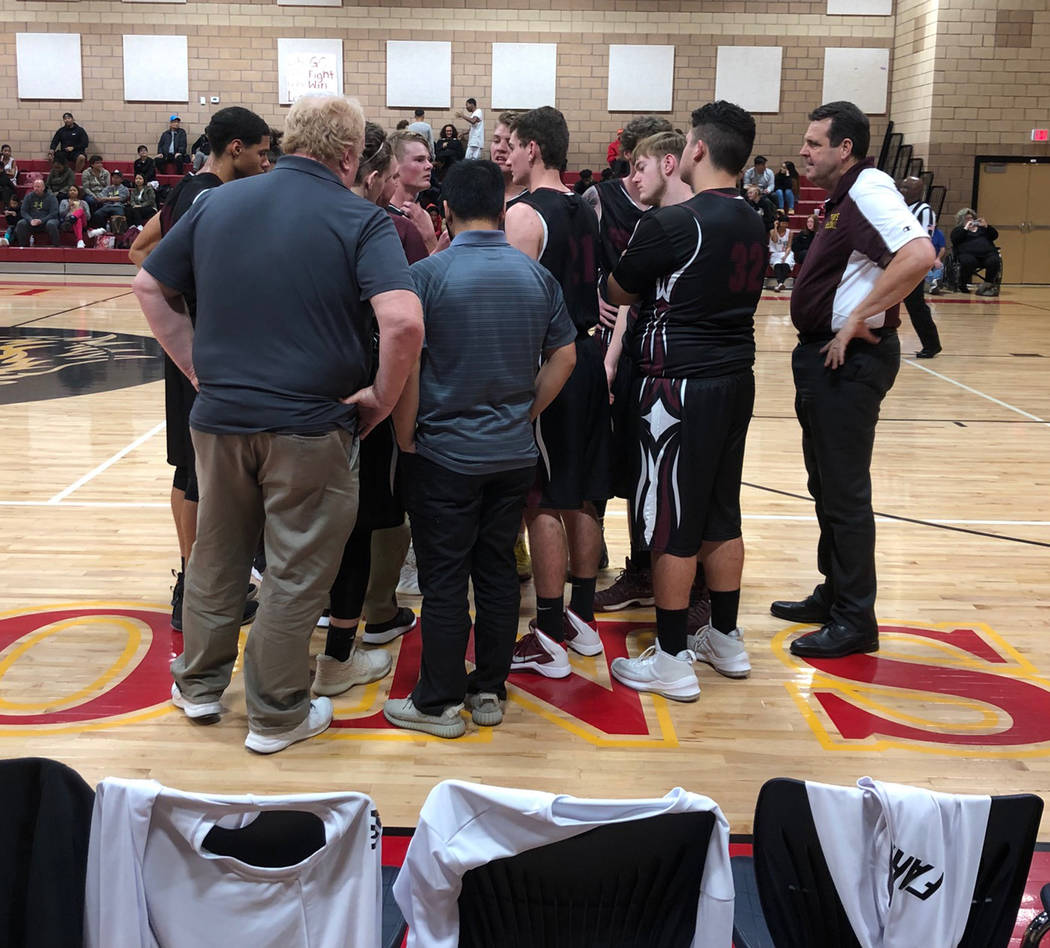 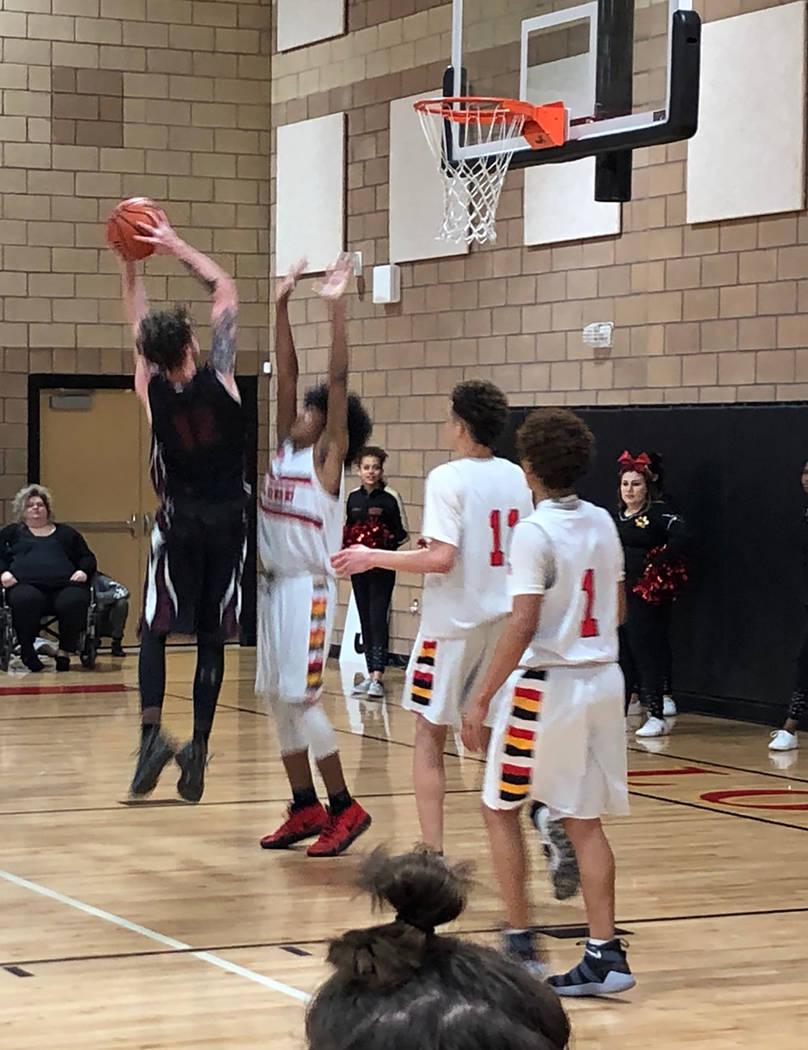 Tom Rysinski/Pahrump Valley Times Senior forward Chance Farnsworth goes up for a shot against Somerset-Losee on Monday night in North Las Vegas. Farnsworth led the Trojans with 18 points in a 61-56 loss to the Lions.

The Trojans outscored the Eagles (10-7, 6-4 2A Southern) in each quarter. The win was especially important because the Trojans had been in their previous two games deep into the fourth quarter before losing.

“It was awesome,” Pahrump Valley coach Dan Clift said of the win. “I didn’t know how the kids were going to react because that’s a 2A basketball team, one we should beat, but I told them before we went out there that doesn’t mean anything. They’re going to have a kid or two who can shoot it, and if we don’t play hard and do the things we need to do it’s going to be a long night.”

Especially gratifying to Clift was that his three top scorers had good games on the same night.

“I don’t think that’s happened all year,” he said of Odegard, Farnsworth and Severt reaching double figures together. “I think of that all the time. Chance will go big and Brayden won’t, or Brayden will go big and Chance will be in single digits. That’s huge for us. I know that we’re going to have some success when everybody gets involved.”

The win helped ease the sting of a tough loss the night before at Somerset-Losee. The Trojans defeated the Lions 49-46 on Dec. 13 in Pahrump, but the Lions were a different team with junior guard Ray’mon Daniels on the roster.

“The big difference is No. 11 (Daniels) played on the JV the first time, and he had 36, maybe 33 points on the JV,” Clift said. “He joined the school just before the semester and they had to wait until the new semester to bring him up.

“We tried to play man for about eight minutes, and we realized we can’t guard him even when we’re not tired. We went to a zone, and that was a little more effective.”

Farnsworth scored the team’s first 8 points and finished with 18, while Whittle poured in 17, including three 3-pointers.

“That’s the best Ethan has played all year,” Clift said.

The middle two quarters were mostly quality basketball for the entire team, as the Trojans put up 35 points, well above their norm. The third quarter saw them put on a shooting exhibition with four 3-pointers, including two by Whittle and one each from Odegard and sophomore Logan Gavenda.

“We talk about being patient and moving the ball, and then it’s green light — for most,” Clift said. “What we don’t want is to shoot that 3 really quick. We need to move it, we need to look inside, come back out, reverse the ball, and then just about everybody can shoot it. We did a really good job with that tonight.”

In addition to his 18 points, Farnsworth, who has a habit of picking up quick fouls, had Clift raving about something on the defensive end.

“That’s the best he’s played,” Clift said of the 6-foot-4 senior. “He did something down here, a kid gets the ball, and not only does he not leave his feet but he goes straight up. First time — and I’ve had the kid three basketball seasons — first time he didn’t leave his feet and try to block the shot.”

So while a lot of good things happened Monday night and the previous Thursday when the Trojans led 28-22 after three quarters only to lose for a second time this season to Valley, 45-41, but these three games were circled for a reason.

“We need to win these games,” Clift said. “They’re the ones on our schedule we really want to play well and work toward in practice. I think some teams like Mojave it doesn’t matter what we do, they’re going to be a handful for us. But a team like (Losee), we handled whatever they threw at us.

“But it’s turnovers again. We get sped up and our kids will panic a little bit, and we’ll struggle to not turn the ball over when all we have to do is wait until everybody gets down there.”

The Trojans go back into the Sunset League fire Tuesday when Del Sol (12-10, 3-3 Sunset) pays a visit.