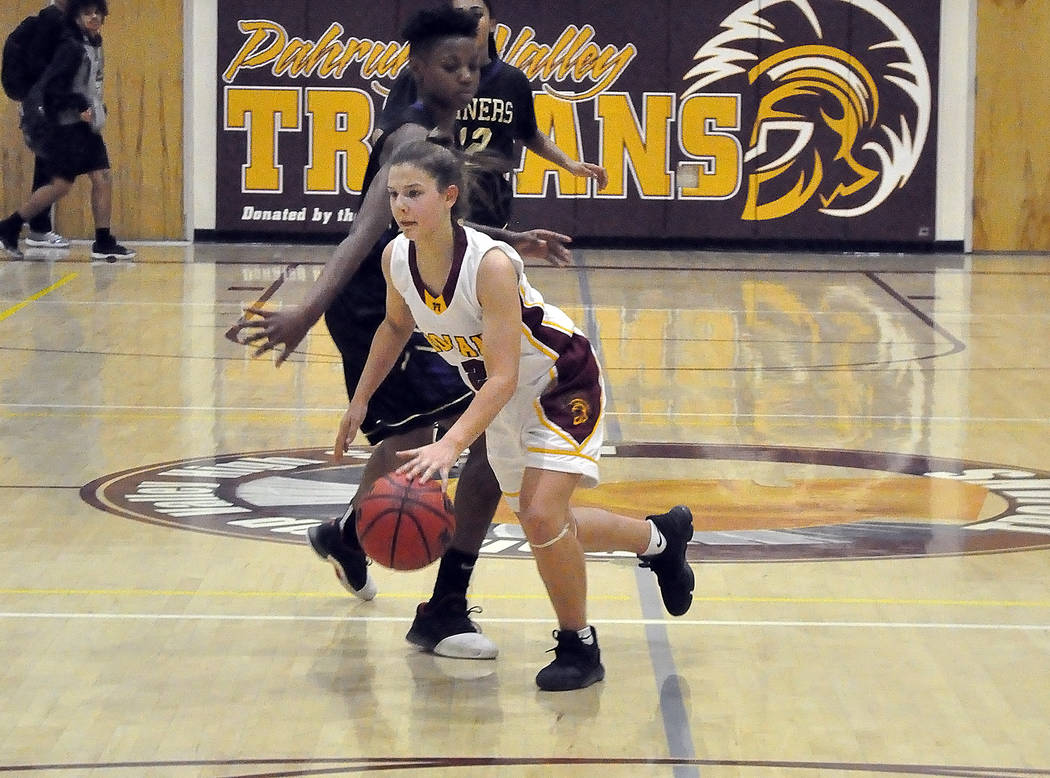 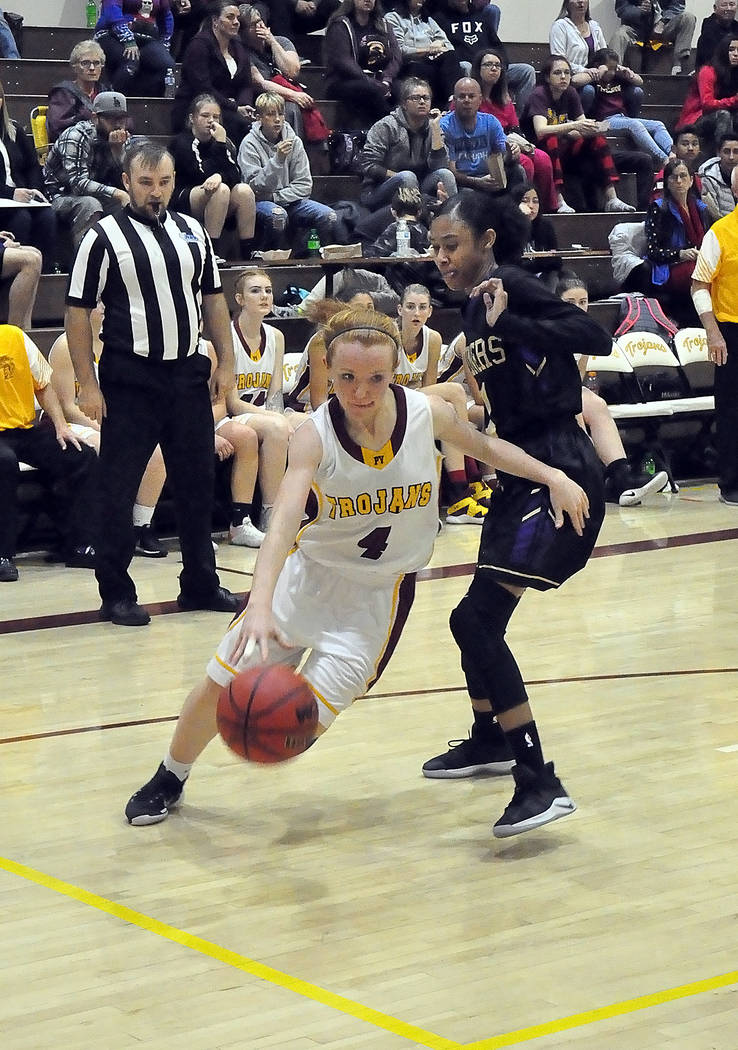 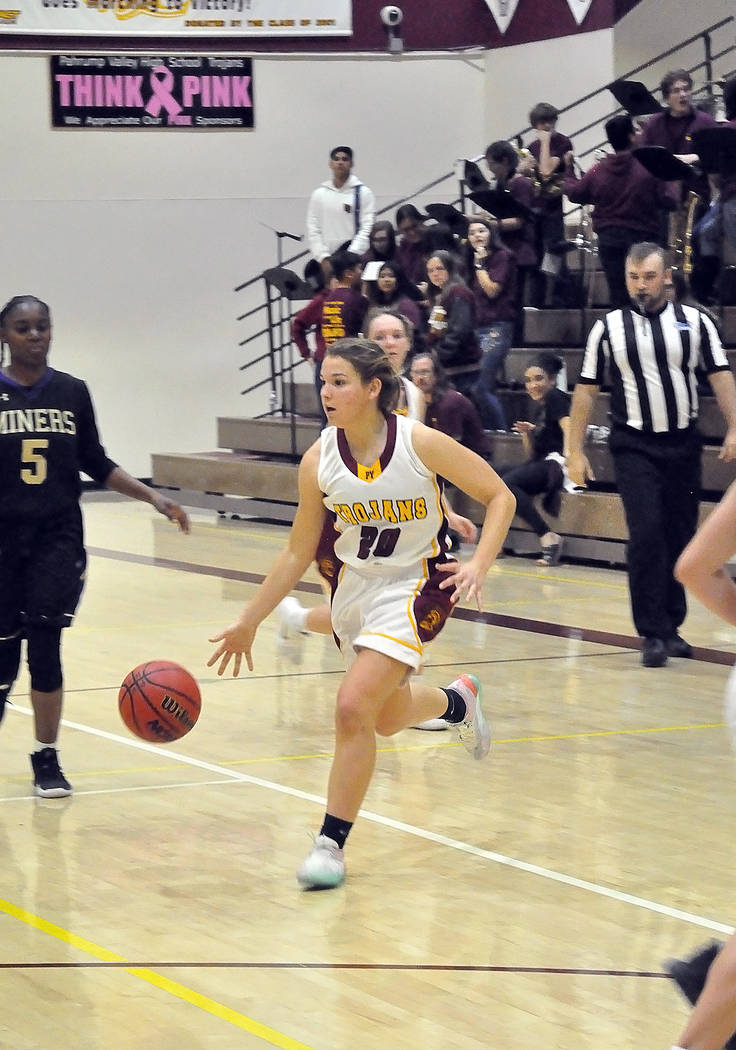 Except for one thing: “We stepped up and won a close game,” he said.

Junior Kylie Stritenberger scored nine points to lead a balanced attack and the Trojans played quality defense without fouling in a 38-34 victory over the Miners in Pahrump, sending the Trojans into a holiday break with a 10-6 record.

The inside-shooting struggles continued, and again both teams had the same issue. Missed layup after missed layup had players and coaches frustrated in a game that was tight throughout.

One key difference in the game was that the Trojans played quality defense without fouling much, while the Miners did not. Sunrise Mountain went to the free-throw line just five times, making four, while Pahrump Valley shot poorly but a lot more often, hitting 10 of 18 from the stripe.

Each of the first three quarters started very well for the Trojans. Freshman guard Tayla Wombaker, part of a revamped starting lineup that also included Angela Zeigler, Kate Daffer, Jackie Stobbe and Makayla Gent, opened the game with a 3-pointer 15 seconds in, and it seemed like a good omen.

“We just decided to go a little different and maybe try to wake some kids up and see what happens,” Hopkins said of the lineup change.

In the second, neither team managed a point for 4 minutes, 19 seconds, but it was the Trojans who broke the ice. A layup from Daffer and a putback by Nicky Velazquez opened up a 17-7 lead with two minutes to go in the half. The lead was 19-12 at the break.

Then in the third, Stritenberger asserted herself inside with a bucket and getting to the line to hit two free throws, Daffer added a free throw and suddenly Pahrump Valley had its biggest lead of the game at 24-12.

“I thought we had a chance to put them away right after the half, and we just kind of struggled with the pressure they put on us,” Hopkins said. “I suppose six or seven times we went over what we wanted to do in the huddle and we’d get out there and forget about everything we talked about.”

The Miners then held the Trojans scoreless for almost six minutes as they chipped away at the lead. Hopkins called two timeouts to settle things down, but the Miners’ pressure helped cut a 12-point deficit to a 25-24 game by the end of the quarter.

“They’re quite a bit improved over last year and they have some good athletes, and I think they’ll do some damage on that other side (Sunrise League),” Hopkins said. “You can’t take them lightly. In the past few years, Sunrise hasn’t been that tough, but I told the girls when we came out they’re much improved from when we played them the last two years.”

The Miners actually took a lead twice during the fourth quarter, the last at 28-27 on senior Trinity Lavoll’s layup after a steal with 6:13 left to play. Lavoll led all scorers with 13 points.

But the Trojans recovered, and back-to-back baskets by Wombaker and Stritenberger restored order. The Trojans never did shake the Miners, but they also didn’t surrender the lead again.

“In the end, we made some free throws when it counted, and Maddy Souza made a great jump stop at the end and scored and, like I told the girls, we bent but we didn’t break,” Hopkins said. “And again, Makayla did a really good job defensively.”

But offense remains an issue. Against a young team such as Sunrise Mountain, defense was enough. It won’t always be that way, and Hopkins has seen enough basketball to know that. But he also knows his players.

“I think we have a couple of kids that can break out and score,” he said. “It was nice the way Tayla Wombaker started off, and Maddy Souza came off the bench and played really well for us. Now we’ve got about nine days off, then we’re at Green Valley. We’ll play three games in our pool. Then after pool play they put you in a bracket-type thing, so if you keep winning you get to play more.

“It will be good for us. We have some kids who will miss some Christmas practices, but it is what it is. Get it done.”