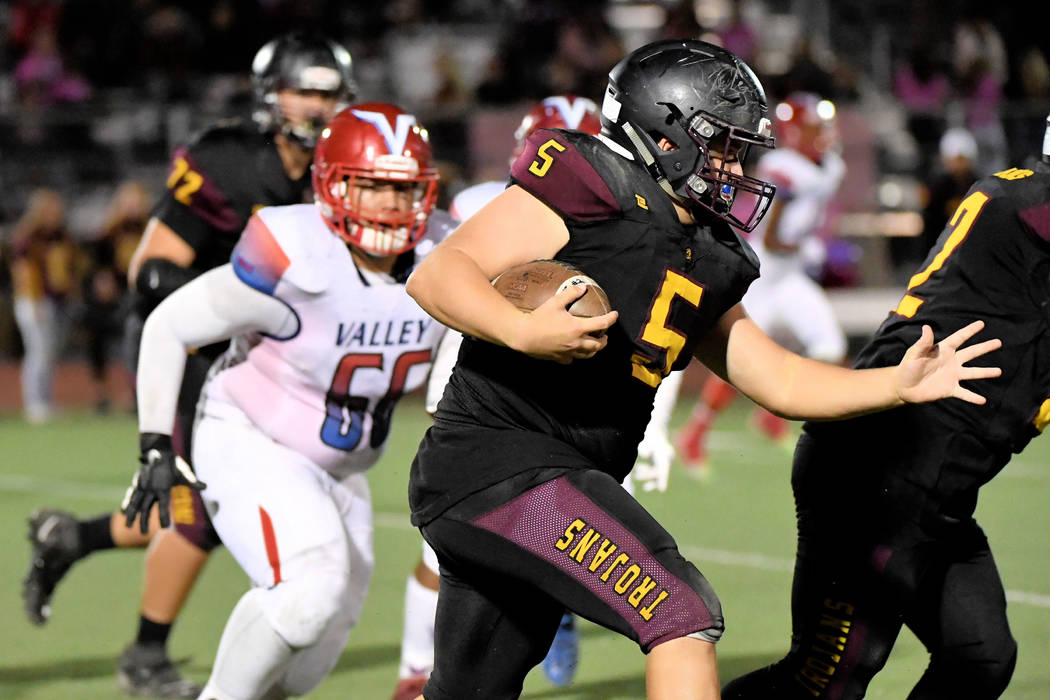 Peter Davis/Special to the Pahrump Valley Times Pahrump Valley senior Kody Peugh led the Trojans on Thursday night with 135 yards on 15 carries, including a 50-yard touchdown run, as the Trojans defeated Valley 44-36 at Trojan Field 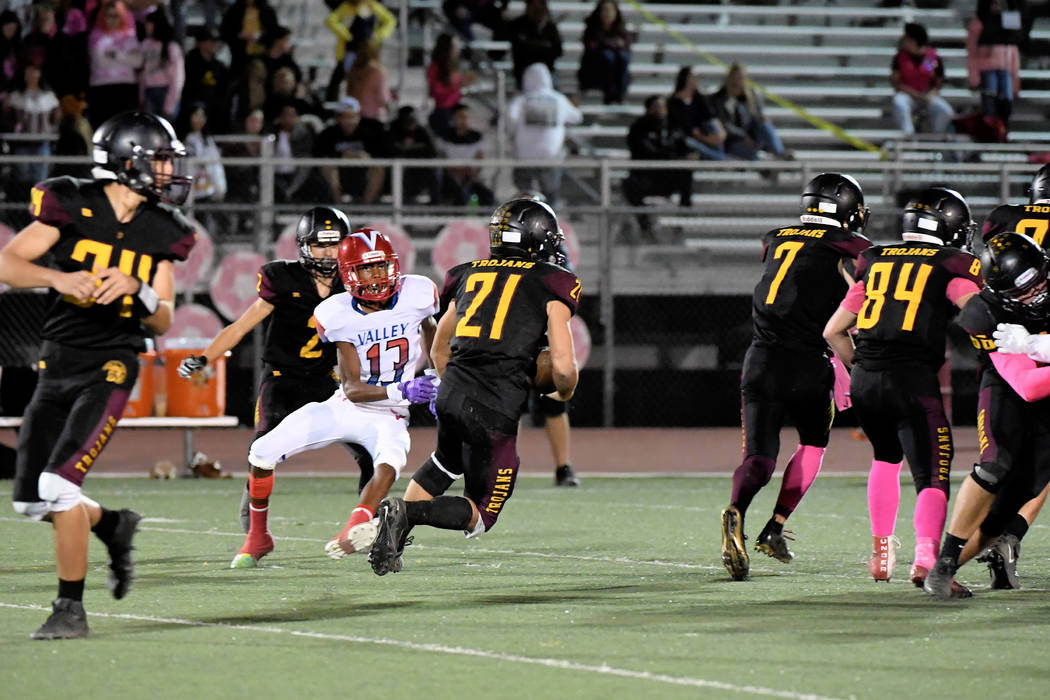 Peter Davis/Special to the Pahrump Valley Times Dylan Wright (7) and Andrew Avena (84) look for someone to block as Tony Margiotta (21) hits a hole during Pahrump Valley's 44-36 home win over Valley on Thursday night. Margiotta carried 20 times for 96 yards and 2 touchdowns. 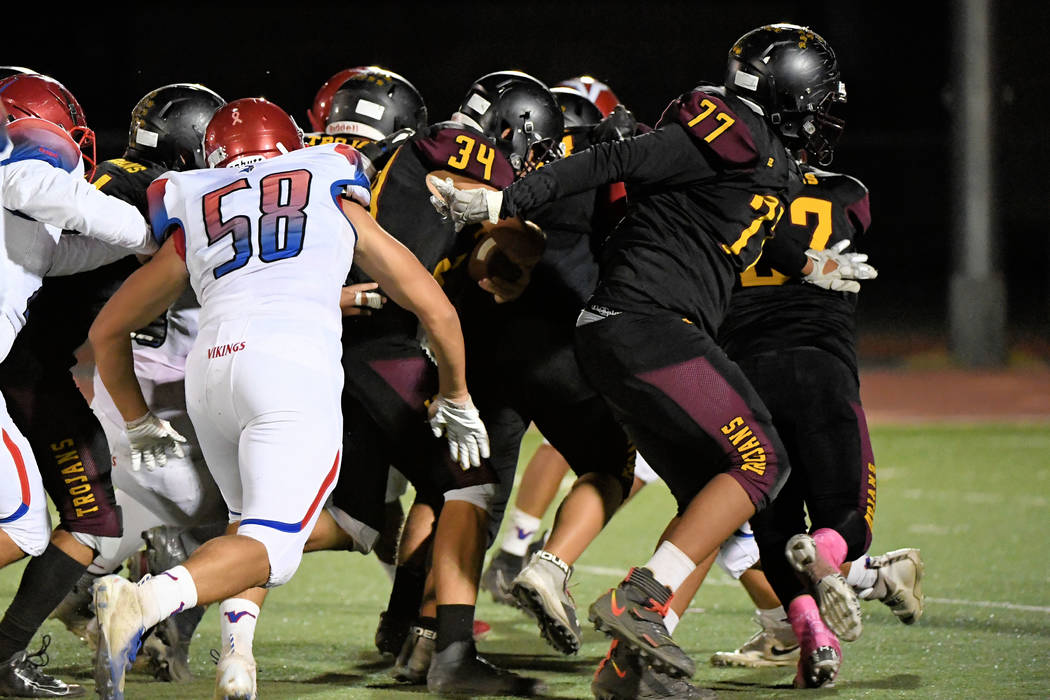 Peter Davis/Special to the Pahrump Valley Times A phalanx of Pahrump Valley blockers protects sophomore quarterback Roman Roberts on a keeper during the Trojans' 44-36 win over Valley on Thursday night in Pahrump. 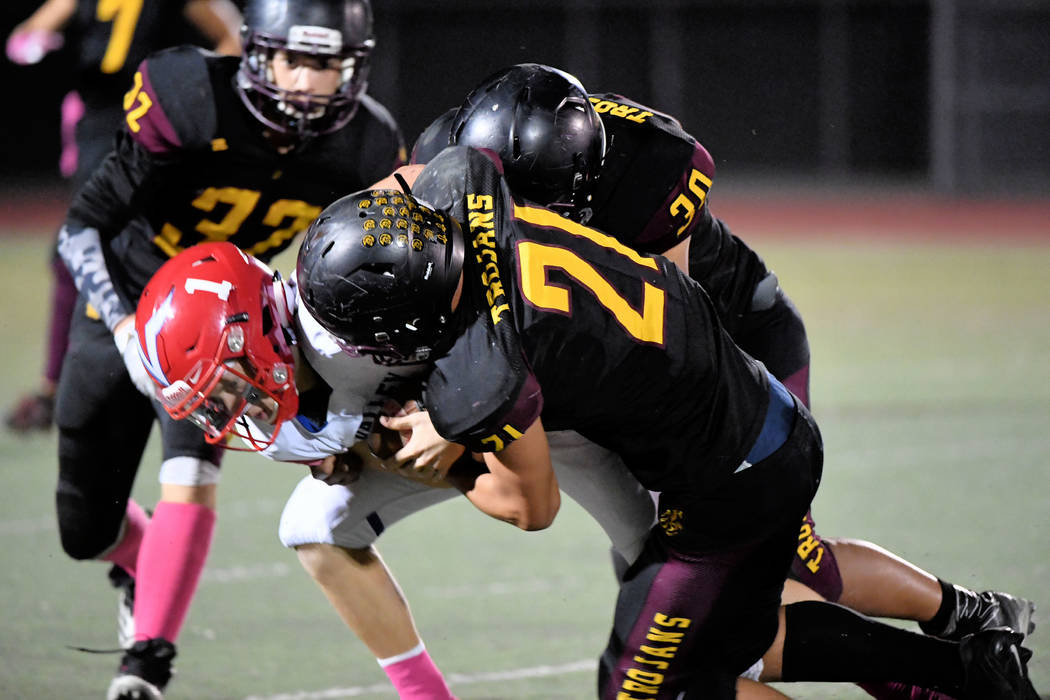 Peter Davis/Special to the Pahrump Valley Times Tony Margiotta (21) and Fabian Soriano (30) combine to bring down Valley quarterback Jarrett Zibert during Pahrump Valley's 44-36 win over the Vikings on Thursday night at Trojan Field,

Sure, Kody Peugh rushed for 135 yards and 2 touchdowns, Tony Margiotta added 96 rushing yards and 2 scores, and Neil Redmond raced 42 yards for his first touchdown of the season, but the stars Thursday night were the big boys up front.

The Pahrump Valley High School team ran 62 rushing plays for 441 yards in a wild 44-36 win over Valley at Trojan Field that locked up the No. 2 seed in the Sunset League and a home playoff game.

Although that kind of offense defines the Trojans, this was easily their best performance of the season.

“They were absolutely phenomenal,” Trojans coach Joe Clayton said of his linemen. “We noticed how they came off the ball. They were so explosive. We always told them how important it was to be the first one off the ball, but we really focused on it this week, and they took off with it.

“Like Kody Peugh said, I never touched the ball when I didn’t get hit for 5 yards.”

Peugh felt that early. After Valley took the opening kickoff and marched 80 yards on just six plays, the senior took a handoff on the Trojans’ second play and burst through for a 50-yard score.

“You really don’t know until you get that first drive, but right from the start, when Kody Peugh outran their defense, we knew it was going to be a long night for them,” Clayton said. “He outran those guys.”

But a long night for the Vikings defense didn’t mean their offense wasn’t going to show up. As it turned out, the Trojans would need all of those 44 points.

Valley senior quarterback Jarrett Zibert was sensational, throwing for 189 yards and 2 touchdowns while rushing for 120 yards and a score. Senior Larry Perry was on the other end of seven of those passes for 64 yards, rushed for 59 yards on 8 carries and had 84 yards on three kickoff returns.

“The interesting thing about their offense is we were not surprised,” Clayton said. “We were more concerned about their deep ball and number 7, Larry Perry. We knew he was a phenomenal ball player. We were so worried about covering the deep pass that we were willing to give up some of the short-yardage plays underneath.”

The one mistake Zibert made proved fatal to the playoff chances for the Vikings, who, like the Trojans, needed to win to reach the Class 3A South postseason field. After the Vikings cashed in a fumble early in the third quarter to take a 28-24 lead — needing just seven plays to go 68 yards — the Trojans answered with a seven-play, 55-yard drive capped by Peugh’s 1-yard TD run.

Just as it looked as if the teams would trade scores the rest of the way, Zibert threw up a horrible pass aimed at nobody, except, apparently, Pahrump Valley junior Dylan Wright, whose interception gave the Trojans a chance to take a two-score lead in what had been a see-saw game.

Which they did, as the Trojans ran seven times for 47 yards, the last 24 from Margiotta, whose 2-yard run and 2-point conversion run gave Pahrump Valley a 38-28 lead with 3:49 left in the fourth quarter.

The Trojans are built to run the ball down an opponent’s throats, but Pahrump Valley’s linemen said the Vikings wore down far earlier than most foes.

“They gave out probably in the first quarter,” junior Anthony Pearson said. “You could just feel them give out.”

“You could tell in the first quarter they were breaking down,” senior Miguel Belman added. “It was that early.”

That advantage up front proved vital late, as the Vikings weren’t quite done. Zibert completed 4 of 6 passes for 47 yards and ran twice for 11 yards, including a 1-yard keeper with 2:32 to go as Valley used just 1:15 to pull within four. Zibert then hit Perry for the 2-point conversion, and suddenly the Trojans were faced with the need to get first downs to seal the win.

Nobody on the Trojans sideline thought that would be a problem. Neither, of course, did the linemen.

So, taking the ball with 2:30 left, the Trojans’ plan was simple: Get a first down, force the Vikings to use up their timeouts, then take a couple of knees and get out of there.

Somebody forgot to tell Redmond. After Margiotta’s 4-yard run on third-and-1 near midfield set up garbage time, Redmond took a first-down handoff and raced 42 yards untouched into the Valley end zone. Game over, right?

Nope. The Vikings picked a good time to stop the run, foiling the 2-point conversion try and keeping the Trojans’ lead at eight. Instead of running out the clock, the Trojans gave the Vikings a chance to force overtime. Valley’s offense had scored quickly more than once already, and taking the ball at their own 47 with 1:28 left was hardly an insurmountable task.

“We were so confident on offense, but at the same time, it wasn’t so much I wasn’t confident in our defense, it was more of I was concerned about their athletes,” Clayton said.

But those athletes couldn’t get it together one last time. After finding Perry for 6 yards on first down, Zibert threw three consecutive incompletions, rolling left each time, trying to find Isiah Ramirez on fourth down. All that was left after that was Roman Roberts taking a knee twice, and the Trojans were back in the playoffs.

While everyone asked said he hoped to face Boulder City in the first round, instead it will be Moapa Valley making the trip to Pahrump on Friday night. The Pirates (6-4, 3-2 Sunrise) wound up third in the Sunrise League after losing 28-19 at home to Virgin Valley on Thursday night. That win gave the Bulldogs the No. 1 seed in the Sunrise, and they will host the winner of the Moapa Valley-Pahrump Valley game on Nov. 8.

Del Sol will visit Boulder City in the other first-round game Friday night, with the winner heading to Cheyenne.