Steve Ranson/Special to the Pahrump Valley Times Taylor Egan (15) gets an enthusiastic welcome at home plate after her first-inning home run gave Pahrump Valley a 2-0 lead over Churchill County in the Class 3A state tournament on Friday in Reno. 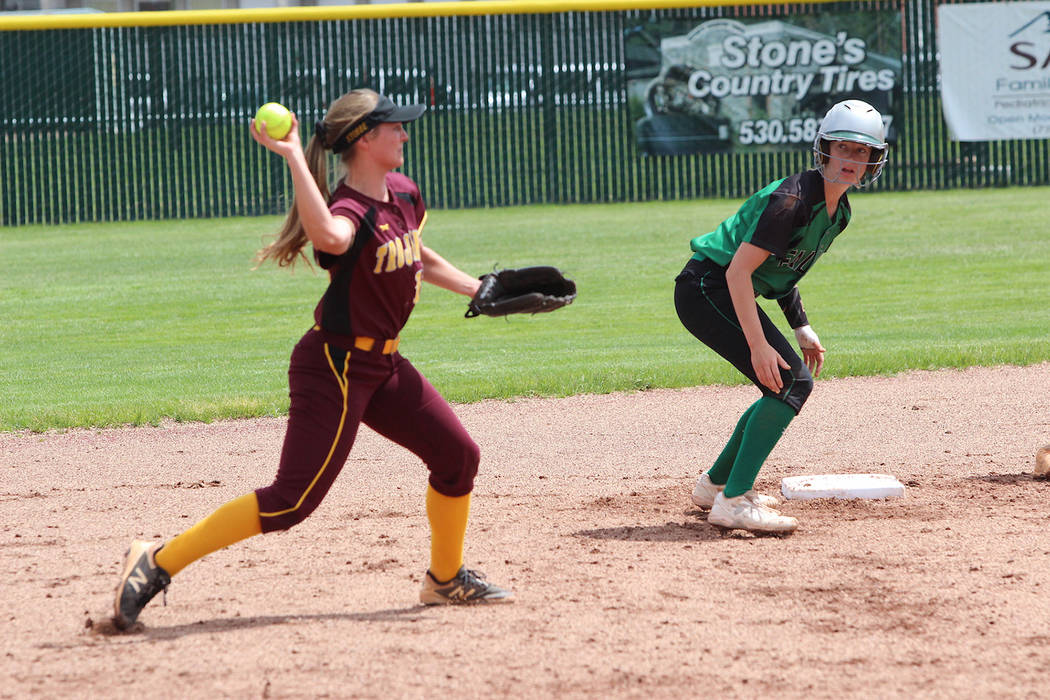 Steve Ranson/Special to the Pahrump Valley Times Jackie Stobbe, left, holds the runner at second base before firing to first base for an out during Pahrump Valley's 12-2 loss to Churchill County in the Class 3A state tournament on Friday in Reno.

It was a quick trip to the Class 3A state tournament for the Pahrump Valley softball team as the Trojans were beaten 12-2 by Churchill County and 8-0 by Lowry.

Against Lowry on Friday, Skyler Lauver went 3-for-3 with two doubles, but the rest of the Trojans’ offense couldn’t get untracked as the Buckaroos won the elimination game.

Sylvie Prokasky spun a five-hitter for Lowry, which scored single runs in the fourth and fifth innings before exploding for six runs in the sixth.

Sierra Mastrejuan was 3-for-4 with two doubles and two RBIs, and Prokasky went 2-for-3 with three RBIs for Lowry.

Taylor Egan and Amaya Mendoza had the other hits for Pahrump Valley, which finished 26-12. The Trojans also had 26 wins last season, and they rolled through the Sunset League at 10-0 each year. Like last year, the Trojans won every league game by the mercy rule.

And like last season, a region championship eluded them before they came up short in the states. A year ago, it was Moapa Valley winning two one-run games to claim the 3A Southern championship, but the Trojans gained a measure of revenge by eliminating Moapa Valley in the second game of last year’s state tournament.

This time around, it was Boulder City claiming the region title, but the Eagles won their opening game in the state tournament before being eliminated by Churchill County of Fallon.

Churchill County, the team that eliminated the Trojans from the state tournament a year ago, handed them a decisive 12-2 defeat in five innings in this year’s opener.

Taylor Egan’s two-run home run in the top of the first inning gave Pahrump Valley an early lead. Egan also had a double and finished 3-for-3. Evandy Murphy, Skyler Lauver and Ally Rily each had one hit for the Trojans.

Churchill County scored once in the second, three times in the third, twice in the fourth and ended the game with a six-run fifth inning.